‘Masterminds’ is A Fun, Silly Comedy and Probably Your Best Bet for Laughs This Weekend at the Box Office! 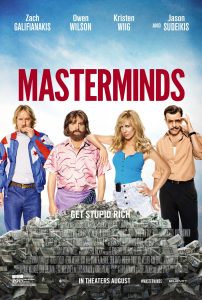 What happens when a bunch of hillbillies concoct a master plan to get stupid rich, stupid quick? Well, it gets pretty stupid. And I liked it. This movie from Jared Hess (of Napoleon Dynamite fame) is a ‘Based on a True Story’ comedy with mad liberties taken to up the funny factor.  Going into the film I wasn’t expecting much but with such an excellent, charming cast it’s hard not to have a soft spot for Masterminds. Recently I reviewed BBC Films’ Denial and cheered for the intelligence of that movie. Well, here I go, being a hypocrite because this movie is dumb as a box of rocks, and I enjoyed every minute of it.

Zach Galifianakis plays David Scott Ghantt, a security guard for an armored car service who dreams of being a bad ass. Life hasn’t offered him that chance… until now! Owen Wilson steps in with a plan and when all the pieces are put into play Ghantt finds himself not just on the run from the law, but his own co-conspirators. That is essentially the plot of the film and it’s good enough as any to lay the foundation for the fun to be had, the majority of which is through the cast.

The fact that the ‘Based on a True Story’  subtitle doesn’t arrive until a few moments into the film, when it’s tone of silliness has been established shows just how high (or in this case low) on the list of priorities it is for the movie to be factually accurate. This becomes more clear in the second and third acts when a case of mistaken identity flourishes in the weirdest of ways.

As I said, the cast is charming and really they’re the golden light in this otherwise middling movie.

As a comedy the jokes are important, sure, but it is much more in the delivery, how those lines come across between actors that is often the winning combination for chuckles. Zach Galifianakis is charming and stupid as simpleton Ghantt, Kristen Wiig as the restless honey pot, while Owen Wilson plays a similarly simple but greasy criminal and Kate McKinnon Kate McKinnon’s it up as Ghantt’s fiancee Jandice. When Jason Sudekis arrives as hitman “Mike McKinney” the movie fully commits to comedy and leaves reality behind.

As mentioned the movie is a simple, dumb comedy. The jokes are often gross or crass, the situations silly and impossible and with a cast of SNL alums, it frequently feels like an extended skit. It stands to reason with Lorne Michaels producing.

Each character is amped up.

Everyone puts on ridiculous accents, dials their emotion way up (or way down in the case of Kate McKinnon) and delivers their piece of the puzzle in the silliest of ways.

If anyone one actor decided to play their role more straight, or wasn’t on board with the tone of the picture it would have ended in disaster, but with every single person committing to just having fun, it allows the movie to succeed.

So long as you don’t take yourself too seriously, you’ll find the laughs are fast and furious as you follow the absurd (and mostly false) tale of one of the largest cash bank heists the US has ever seen.