Blair Witch is a Creepy, Enjoyable Addition to the Franchise 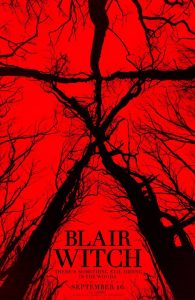 When a group of college students head into the Black Hills of Maryland in search of one’s missing sister, they soon discover the local legends may be more than just fantasy…

That’s right! The hit franchise that brought us shaky PoV cam is back! I know, that doesn’t sound appetizing, but hear me out. First let me disclose my bias. I did not care for The Blair Witch Project (1999). I saw it when it released and it was the first time I ever remembered actually being ready to leave the movie theater before the feature was finished.

Here’s another bias: I did not care for Adam Wingard’s  You’re Next (2011). That one probably suffered from the whole “It’s the new way of horror! Scariest movie ever!” etc. blitz that happened with its release.  So you’d think that’s two strikes against this production going into the theater. And yet, with all that, I enjoyed Blair Witch.

To set it up, this film is a direct sequel to the original ’99 movie. They skip over Book of Shadows and any other expanded universe stuff. The group of this outing into the spooky woods is made up of James, the brother of the main character Heather from the original, and his friends Pete, Lisa, and Ashley.

Along the way they meet up with a couple of other Blair Witch enthusiasts in Lane and Talia, two locals of Burkittsville, MA who found a video in the woods. That video, James believes, shows his sister in a split frame running in a house. So, the friends pack up to hike the woods and see if they can find this mysterious house, looking for any sort of closure for James.

This movie, much like the original, is shot using the whole found footage style of film making. The crew are outfitted with a camera, earpiece cameras, and a drone so everything we see is from those points of view. I am not a fan of that, as I am sure I have discussed at length elsewhere on the site. Seeing the drone gave me hopes that they’d tweak the style much like the folks did with Chronicle, the fiction allowing for more dramatic shots etc. Unfortunately the drone gets little play.

The stop/starts of footage when the scenes change, which is frequent, often dissipate any tension in the most ham-fisted manner. Luckily, the cameras of today have much better quality so the filmmakers don’t have to dial down the visuals too much to create a believable level of quality while immersing the audience into the action.

After the first act, the movie makes the leap from standard to extraordinary, a commitment the original never quite made. For that, I am fully in favor of this movie. It commits to doing something worth doing, not just rehashing the first lost in the woods dynamic and jump scares. Don’t get me wrong, the jump scares are plentiful, but thankfully they are contained to the first third of the movie, once things start going the scares are legitimate.

Knowing the folks behind You’re Next were involved I was wondering what angle they’d view this story through and found myself attempting to call it but I was never right. I can honestly say I did not expect them to take the story the way they did, playing with the very reality of the movie in a way few if any have done before.

Final Thoughts: This movie had more going against it when I went into the theater and yet it still managed to exceed expectations and deliver an enjoyable experience. If you enjoyed the original, don’t mind found footage stuff, or like scary movies, there is a lot to dig about the newest delve into the Black Hills. I was genuinely creeped out at several points and while I personally don’t think the film sticks the landing, it fits perfectly with the franchise. For better or worse.