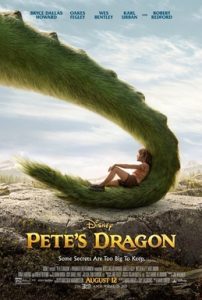 Although Disney has hit the target in the bullseye nearly every time with their animated movies, can the same be said for their live-action films? Without counting franchise series like Star Wars or the MCU, does Disney live up to their own sterling reputation? While live-action franchises like Pirates of the Carribean and Cinderella certainly rake in the money, they aren’t exactly functioning at the same caliber as the animated movies.

There is certainly a flare for the fantastic and magical when it comes to Disney, but Pete’s Dragon delivers an authentic, wholesome feeling that we just haven’t felt come from Disney’s live-action branch of films in a while.

The most stunning thing about Pete’s Dragon is the ability it has to transform you and immediately draw you into a story that seems straight forward in intention. While the premise might seem a little outlandish, the film immediately settles in comfortably with Pete and Elliott’s life together. Elliott being a furry green dragon that finds Pete in the woods after a tragic car accident befalls Pete and his parents. Oakes Fegley, who plays Pete, is genuine and warm, Pete is a child with a wild heart and a curious mind and Fegley does wonderfully playing off a CGI dragon.

Both Oakes Fegley and Oona Laurence, who plays Natalie, shine through with strong performances. And while the adult characters are one-dimensional, the talented cast give them life in a way that doesn’t make it unbearable. Bryce Dallas Howard’s Grace Meachum is bright-eyed and independent, having great chemistry with both Fegley and Robert Redford, who plays her father and someone who has seen Elliott before.

Pete’s Dragon weaves an inspiring and endearing story. It takes place in a simpler time and place, counting on emotional weight and the cast’s talent as the pillars of the film. Most importantly, it shows the strength that Disney has in producing and creating movies. In lesser hands, this could have easily been a flop, but there is a subtlety and wisdom to the approach, that not only makes it a wonderful film, but one that emphasizes and highlights all the best things about the brand.

Final Thoughts: Pete’s Dragon embodies everything I loved about family films. It is relatable to watch as an adult, it is fantastical and adventurous for a child, and it needs no frills or shocks to make it good.