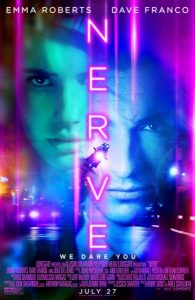 
Rating:
Review Spoilers: Low
Based On Nerve by Jeanne Ryan

The newest film from Catfish and Paranormal Activities 3 and 4 directors Henry Joost & Ariel Schulman paints an almost too timely picture of youth and technology.

The plot, in summary, involves a play-it-safe teenage girl who decides to rebel, if only for one night and prove to her friends that she can be adventurous and unpredictable by playing the newest digital sensation, Nerve, but as the night (and her popularity) goes on, she finds herself subject to increasing risks by the Watchers. Take Periscope, give it some mechanics for viewers to put in money and challenge the streamer and you got Nerve.

Now, being from the folks who brought you the debatably veracious Catfish, it should come as no surprise that the technology and its real world implications are the moral quandary center to the film. The big thread weaving itself through the film is the danger of anonymous (not that anonymous, but the Guy Fawkes masks and dark web references will have you groaning regardless) mob mentality when enforced on individuals.

It isn’t a terrible theme to have, however this movie squanders every opportunity to be subtle and allow thought with flashing edits, ham-fisted dialogue, and even a dope soapbox monologue from the main character discussing right and wrong.

The movie features several of my least favorite things. The movie opens with the screen of a Macbook, the main character off camera logging in and we follow as the camera pans to her mail, Skype, Facebook, etc. I don’t think I ever need to see visual representation of someone navigating their desktop ever again. That first moment should have been a large enough warning for me to recognize but the rest of the movie is expectedly filled with such stuff.

Numerous scenes are viewed looking at the characters through the screens of their smart devices, as they jab their fingers at the screen to simulate the selecting of icons. Convenient however that the screen (the movie screen that is) displays all of the (phone) screen info for the audience in the correct layout as opposed to the reverse. I’ll be honest I hated every use of it.

Or, another pet peeve of mine, when characters in the movie are watching events happening elsewhere and it is clear there is no camera there to capture the events. Nerve is able to subvert this at times as the plot makes clear that Watchers are everywhere and encouraged to film the events from their own perspective, so you’ll see a car drive by with Watchers leaning out the back or, as the movie wears on more and more, drones show up. But if you’re someone who notices that you’ll find plenty of instances of mysterious Phantom Cameraman (ooooo spooooky!).

I can go on and on about how the technology grates on me. As mentioned, this movie is so timely it is already dated. Periscope came and went in a flash (I’m fairly sure it is mostly used for marketing purposes these days) and attention went elsewhere. The frequent skyline shots of New York with flags and usernames rising and falling as players are eliminated from the game is awful. The Macbooks have touch screens (a mild offense). The at times awful dialogue spoken by the characters, “That’s the third option… Prisoner” is the epitome of groan worthy. But I’ll leave it there.

There are some positives, believe it or not. The visuals are appealing, the neon is in full force throughout much of the movie and I’ll be damned if I’m not a fan. The plot of watchers vs players does reflect on the notion of living your life vs sitting on the sidelines as a secondary theme and I dig that.

The high school characters actually look young enough to be in high school. The characters are all rather awful in their own way (again accuracy!) The soundtrack has some real hits. The moments of  daredevil feats make your palms sweat. It works, right up until a kid talks about the dark web or says techno-jargon out loud.

Nerve is a feature length music video and I know I’m not the intended audience. I think it probably will play well with those teenagers on summer break seeing this on their first kinda-sorta-date hangout with their sweetheart. But I do not expect it to engender the discussion it hopes to, or to be remembered more than a year from now. In being so specifically of the moment it feels hard for it to exist anytime else, and unfortunately that moment is already out the door.