Vine Superstar ‘BatDad’ Gets His Very Own (and Very Short) Book! 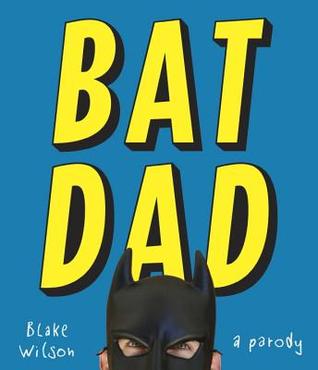 If you haven’t heard of Bat Dad then I applaud you. It means that you have some serious self restraint when it comes to social media and also that you must not have any social media accounts whatsoever. Because while Blake Wilson has made a name for himself as Bat Dad primarily on Vine you can find his videos all over the Internet these days.

And for good reason!

The premise behind the character of Bat Dad is pretty simple. Bat Dad is a dad in a Batman mask making all kinds of hilarious little videos about domestic life and fatherhood – often with the help of his own children. Blake Wilson takes on a grizzled sort of faux-Batman voice and pokes fun at a lot silly day-to-day situations he finds himself in. The videos are all fun, simple, and short – which means they make for some pretty great video compilations.

If you haven’t heard of Bat Dad then check him out on Vine first before ever even thinking about picking up Bat Dad: A Parody. Otherwise, there’s no way you’ll be able to appreciate this book.

Bat Dad: A Parody is very heavily influenced by the character’s Vine video origins. The book weighs in at just over sixty pages long and the majority of those pages are simply still photos with some minor Bat Dad commentary. Each photograph is basically like a still frame version of the Vine videos and instead of hearing Blake Wilson’s Batman you read his words instead.

For the most part the Bat Dad humor translates to the 2D photo format well. Some of the jokes and moments included would probably work better with a bit more visual context but they’re still fun. You get about one image per page so it’s basically like speeding through sixty Bat Dad videos. The photos are all a bit grainy (since they are all presumably either stills from the actual Vine videos or shot from Wilson’s camera phone) but the words and background images are very bright and vibrant. It’s a very good looking book if nothing else.

One of the really nice parts about the book is actually the introduction. If you’ve ever wondered about the humble origins of Bat Dad, Blake Wilson gets a very brief two page introduction where he explains how he got the mask and how Bat Dad came to be. He also talks a bit about what it’s like to be such a viral internet superstar.

The book is just too short to have much substance. A lot of what Blake Wilson talks about in his introduction could have really been expanded upon throughout the book. I’d have loved to have heard more about what he might have to say about fatherhood, family, and what it’s like to juggle that all with Internet fame. Instead, the book focused more on trying to capture the feel of the videos. While that’s nice and all, I would have really liked to know more about the man behind the mask.

I will say, though, that even though it’s short it is enjoyable. Every page is sure to win a smile and as I said before – it does a good job of capturing the fun of Bat Dad in a different format than you usually see him.

Bat Dad: A Parody is a book that long time Bat Dad fans will easily enjoy. I know I did! Just keep in mind that people really have to know about Bat Dad beforehand to appreciate it. I really can’t imagine reading this book without having seen the Vine videos. But as long as you have seen them, definitely check this book out. And if you’ve got a social media savvy dad of your own then this might be a great Father’s Day gift!

A REVIEW COPY OF THIS BOOK WAS PROVIDED BY THE PUBLISHER VIA BLOGGING FOR BOOKS. NERDOPHILES WAS NOT COMPENSATED IN ANY WAY FOR THE REVIEW AND THE OPINIONS HERE ARE OURS AND OURS ALONE.