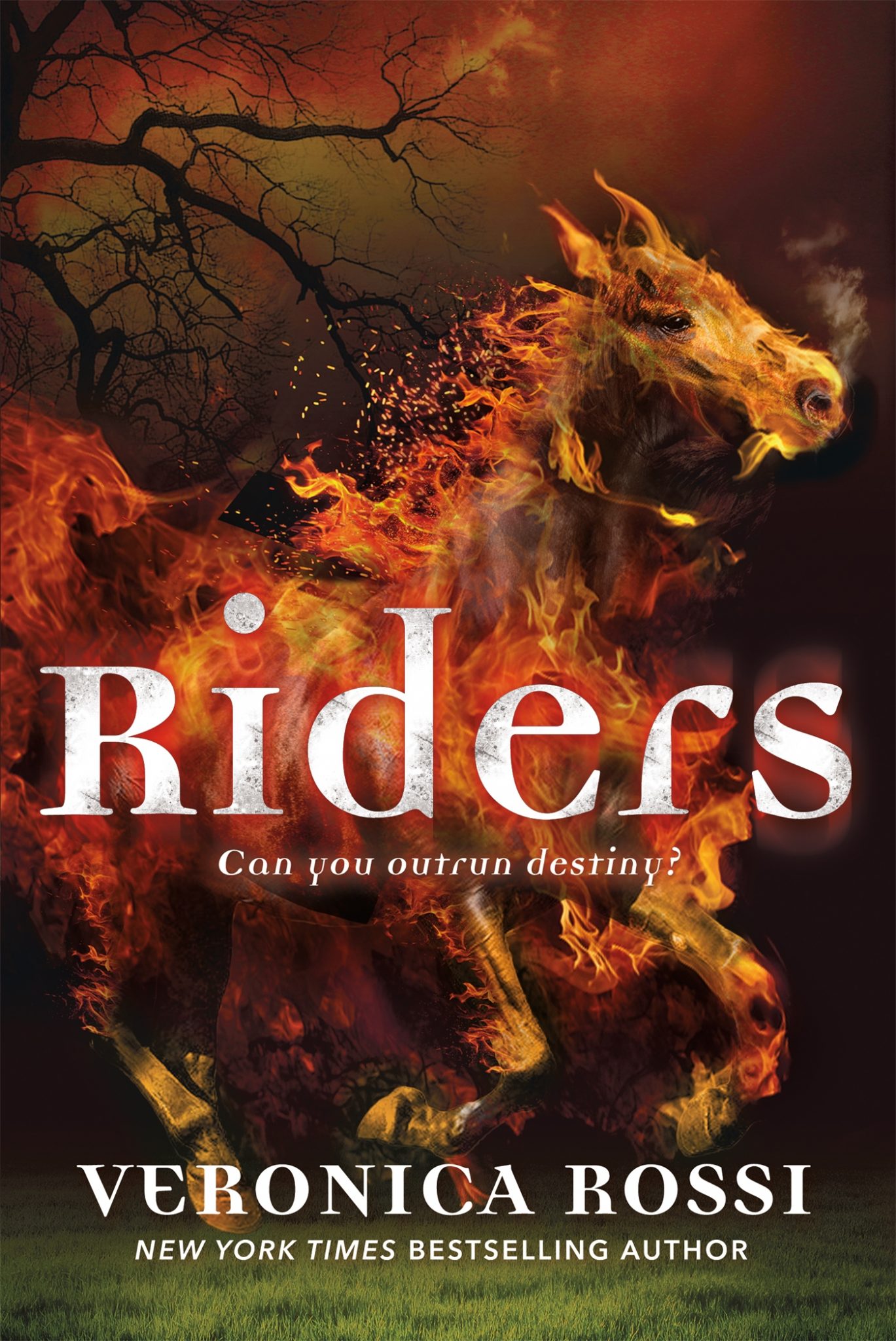 Veronica Rossi has another hit on her hands with there latest book Riders, which came out last week. One of our most anticipated books of the year, Riders is an action-packed breath of fresh air. The premise is new and unique and the storytelling format comes off as both different and compelling. I had a hard time putting this book down because it’s one of those books that moves fast and draws you in. You don’t want to step away from it for any extended period of time because you need to know what happens next.

At the same time, though, the format lends itself well to reading it in bits and pieces.

The book is told primarily from the point of view of Gideon, a young man who has discovered he is the human personification of War from Revelations. After causing an international incident in a clash between the forces of good and evil, he’s captured and forced to tell his story.

Riders is told both in the present and the past as Gideon finds himself trying to explain the things that happened to him. After coming close to death in a military training exercise he finds himself healing quickly, possessing strange objects he’s never seen before, summoning a majestic fiery horse and getting mixed up with a mysterious girl named Daryn (who he inevitably falls for). Daryn is the only one who seems to have even a remote clue as to what is going on and with her he starts the journey to track down the rest of the riders.

Gideon guides us through what’s happening – or rather, he guides his interrogator and we simply go along for the ride. The format works surprisingly well because, though we know where Gideon and the others eventually end up, Rossi still manages to build up the suspense and keep you entertained.

There’s a sense of anticipation not just in the present as Gideon struggles to keep some of his secrets but also in the story he’s telling. You keep wanting to know what’s going to happen in both timelines. One moment you’re hoping he’ll figure out how to escape and the other you’re dreading the moment when he does – or when he finishes telling his story – because that part of the book would end.

It’s an exhilarating ride pretty much the whole way through and that’s really a testament to Rossi’s writing. Another testament to the writing is our main character himself.

While Gideon sometimes comes off as a pretty stereotypical macho male with his own angsty backstory, he’s a fantastic narrator. Rossi did a great job of finding his voice and using him to tell the story. He’s a very solid lead with a unique perspective having truly found his calling in the military.

I like how she built on that and used those experiences to add to his character and to the story. (But having been a lifelong army brat I’m probably biased.) The rest of the characters were great, too. The relationships develop organically and the inevitable romance that gets added in there doesn’t feel forced. It doesn’t feel rushed.

Everything just seems to work.

One of the real strengths of this book is that while it sometimes reads like your typical action-focused young adult novel there’s something more to it. Riders is one of those books that manages to bridge the gap between young adult and adult fiction and draw in older readers. Gideon may be a teenager still but he’s also an adult. He’s a soldier. His sister is in college. Riders is a book that could easily be placed in the adult supernatural/paranormal fiction section and still find it’s readership.

That is perhaps my favorite thing about the book and one of my favorite trends in young adult fiction today. It’s always great with the genre, the characters, and the writers can grow with their readers and appeal to such a wide variety of readers.

I highly recommend the book to anyone who is a fan of young adult literature or paranormal fiction in general. If you like unique, modern twists on classic mythology and scripture you’ll really love Veronica Rossi’s take on things.

Really, I recommend this one to anyone who may be looking for a fun, well-paced read that you can read through in one sitting or in bits and pieces at your leisure. Either way it’s more than enjoyable. Veronica Rossi creates a fantastic, unique book that won’t disappoint.

Honestly, the most disappointing thing about Riders is that the second book isn’t out yet!

A REVIEW COPY OF RIDERS WAS PROVIDED BY THE PUBLISHER IN EXCHANGE FOR A FAIR AND HONEST REVIEW. NERDOPHILES WAS IN NO WAY COMPENSATED FOR THIS REVIEW. OUR OPINIONS ARE OURS AND OURS ALONE.