“Pride and Prejudice and Zombies” is Bloody Brilliant 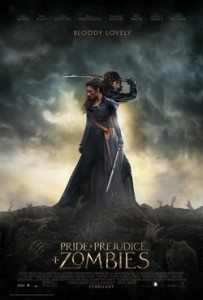 “It is a truth universally acknowledged that a zombie in possession of brains must be in want of more brains.”

Oh my dearest movie, I was smitten from that opening line.

Pride and Prejudice and Zombies looks ridiculously terrible. I went into this movie expecting a hardcore hate-watch, but I was so wrong.

So foolish. So full of pride.

Anyway, Pride and Prejudice tells the classic Jane Austen story of two stubborn people, Elizabeth Bennet and Fitzwilliam Darcy, overcoming their faults and obstacles to realize that they’re romantically perfect for each other. It’s a gorgeous gem of a novel that comes highly recommended from high school girls with Regency fetishes to stuffy literary critics alike.

I know what you’re thinking. Heck, it’s what we all think during historical romances.

What if there were zombies in Regency England?

Pride and Prejudice and Zombies answers your weirdly specific question, gentle reader. PPZ tells that same epic love story, but with the backdrop of hordes of ravenous undead.

I can’t say much about the plot of PPZ without giving away spoilers, but Wickham and Lady Catherine (AAAAH! Lena Headley) are still prominent obstacles to Elizabeth and Darcy’s relationship, Matt Smith delivers a brilliant performance as the meddlesome Mr. Collins, and the Bennet sisters are as deadly as they are beautiful.

Everything about this movie was brilliant. You never knew when a country ball would be interrupted by a zombie attack, and every moment of screentime was filled with an uneasy suspense. The zombie fear was real, and really graphic. There were quite a few zombie heads being shot up close out of nowhere which made the entire audience jump. The zombie actors were terrifying and the makeup/CGI looked like realistic rotting flesh.

Throughout it all, the movie didn’t take itself too seriously, and it excelled in each of its aspects: both the ridiculousness of a romantic film and the shock and adventure of a zombie apocalypse movie. It was bloody brilliant.

The actresses shone throughout the film — the chemistry between the Bennet sisters felt genuine and warm, which provided the movie with some welcome comedic relief. Additionally, the sisters were all amazing, deadly fighters who were such strong, admirable heroines.

I really hope we get some action figure merchandising for little girls to see my new #squadgoals. I also highly enjoyed the girlish concerns of marriage and romance juxtaposed against the looming threat of zombie apocalypse: the girls could be slaying zombies with swords in one scene and then brushing their hair and giggling about an invitation to tea in the next.

Final Thoughts: See this movie. It looks ridiculous. It is. Ridiculously good.