Synopsis: Winn’s father breaks out of prison and comes after him, while Alex must get dangerously close to Max Lord, and Lucy Lane takes a job at CatCo.

This was, by far, the darkest episode of Supergirl to date. The opening sequence shows us two prison guards complaining about how much they hate bringing food to a particular prisoner. When they arrive at said prisoner’s cell, he has a creepy as hell doll sitting there saying “I love you” over and over. They see the prisoner lying on the floor, and when they open the door to get to him (seriously, who falls for that?), he uses a yo-yo with blades as a throwing star, to kill three guards, steal a uniform and walk out the front gates.

It’s The Toyman. One of DC’s most famous villains.

At CatCo, Lucy Lane is in the middle of coffee with Cat, who, unsolicited, offers her a very exciting job as her personal lawyer. Thrilled, she tells the news to James, Kara, and Winn, whose panic over how they’re going to handle having her in the same building where they do secret superhero things makes them less than enthused, and Lucy is a little crestfallen – but mostly pissed off. The hubbub is interrupted though, when the news breaks that The Toyman has broken out of prison. Clearly disturbed, Winn shuts off the tv and starts to leave, but is cut off at the pass when the FBI storms in, demanding to speak to him.

Using her Superhearing, Kara listens in and discovers that the escaped convict is Winn’s estranged father. Winn tells the FBI agent he wants nothing to do with his father – who killed six people by putting a bomb in a teddy bear – and doesn’t know the first thing about where he is.

After, Kara goes to comfort him and he admits that he lied to the FBI. He shows Kara a toy his father left for him that morning. It’s a stuffed figure – looking suspiciously like the original Batman by the way – that plays a message telling Winn where to meet him. Kara convinces him to tell the FBI, and they set up a sting.

Something Supergirl has nailed so far, is the atmosphere surrounding the villains. They did it with Livewire and now with Toyman – all of the scenes look aesthetically fantastic. In this scene, the Toyman lures Winn to a vintage arcade full of giant stuffed dogs with scary eyes, skee ball machines that make startling noises, and a row of cute, little stuffed elephants that blow poison gas out of their trunks. He was never there at all, and Kara uses her superbreath to inhale all the poison gas and save Winn and the FBI. It was one of the coolest scenes the show has done.

Back in the DEO, Alex is trying to convince Hank to reveal himself and his powers to the world like Supergirl did. He’s having none of it. He says he’s seen too much of the panic it will cause, and he’s been around long enough to know better. But Alex insists it might be the only way to find out what Max Lord is up to, in the secret room he beat up James for trying to find.

Ultimately, he agrees to her plan, and she pulls Max from his building on the pretext of a date, while Hank sneaks into the secret room. (Also – Hank pretending to be Max? Highlight of the episode.) He finds the mysterious, comatose Jane Doe and promises to come back for her, but when he’s caught by a guard he’s forced to wipe his entire memory in order to escape, something he swore he’d never do again.

In an absolutely heartbreaking turn, Winn leans on Kara and admits that he’s terrified whatever broken piece snapped inside his father to make him insane, will one day snap inside him, too. That every time he gets angry about something, he wonders if this will be the day he finally loses his mind.

Kara promises he doesn’t have it in him, and she would never let that happen because he’s too important to her. Winn finally confesses his feelings for Kara who is forced to admit that as much as she cares for him, she just doesn’t feel the same. Wrecked, he leaves, only to be snatched off the street by his father. 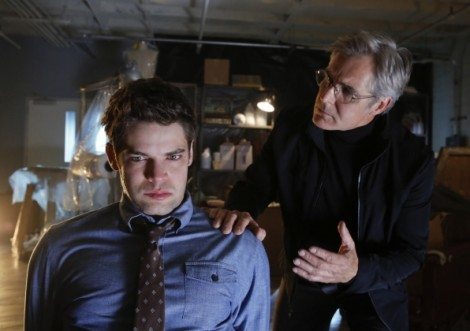 His father gives him a toy gun modified to be a real weapon and sends him to kill a man at a toy convention, or he’ll blow the whole place up. He wants to make his son a killer like him so they can be together again. Trapped, Winn almost goes through with it and is nearly shot down by the FBI before Supergirl manages to freeze all of the bombs in a wall of sprinkler water.

When the dust settles, Winn tells Kara he doesn’t want to bottle up his feelings anymore – that if he wants to make sure he’s nothing like his father, he can’t just pretend that whatever’s between them isn’t there. Kara says she doesn’t know where that leaves them.

This episode did a stellar job at being much darker that usual, without losing the show’s consistent tone. There were still jokes, the characters were true to what we’ve seen, and the payoff was excellent. Winn and Kara’s relationship has taken a major turn, and as coworkers, they’re stuck together. What happens now? Lucy Lane is also just a hop skip and a jump from finding out that Kara is Supergirl – of whom we know she is not a fan, and the show very conspicuously did not show us Toyman’s capture – I have no doubt we will see him again.