We’ve finally arrived at the end of our 2015 retrospective on Hear and Now, having already covered the best hip hop, rock, and electronic albums of the year. But we’re closing out with perhaps the most diverse and interesting lists of the bunch: “pop & folk” a.k.a., “everything that didn’t fit into the other lists.” This means soul fusion songstresses, deeply personal stripped-down indie folk, unorthodox weirdos crooning love songs, and even – that’s right – a country album. Tune in on Nerdophiles.com, iTunes, or Soundcloud. 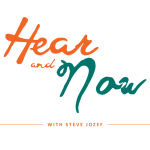