Life and Death Won’t Bore You to the Grave 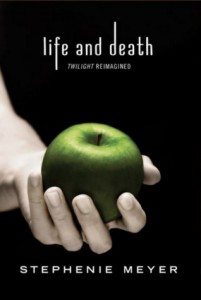 It was actually good. Damn it all.

I can’t lie, this was a much better retelling than what I was hoping for. Meyer did us right by “retelling” the Twilight story, and letting us glimpse what life would have been like with just one Twilight book. Let me be the first to tell you, it would have been good. And I’m willing to bet, the movie would have been better too. Ahem, I digress, let’s move on to the book.

Life and Death  is the story of Beau Swan, a transplant from Arizona to the wet, gray forest of Forks, Washington. An awkward, but affable guy, he quickly makes new friends in school and starts his new life. However, not everyone wants to hang out with the new kid. Eydth Cullen, Beau’s reluctant lab partner, is less than thrilled with his presence. As it would any average guy, Beau is intrigued by her and her unusual siblings. After some time, and a few near death experiences, Beau and Eydth realize there is nothing they can do to stop fate. Together they take on life, death, and angry rogue vampires.

The characters in this book were much like their original counterparts, with the notable difference in the main two. Beau (formally Bella) is easier to like, less mopey, not overly dramatic, and really pragmatic – all things considered. Eydth (formally Edward) is less distant, warmer, and generally less creepy. These character changes made the book more enjoyable to read, as there isn’t any dramatic crying for months. Beyond that, the secondary characters are treated like most others, just background characters without much of a story. Charlie and Renee remain the same overly protective and loving parents as before (because let’s be real, it would be just weird if they changed).

The writing is better than before. This to me felt more The Host and less Twilight. Sure, it’s not Shakespeare, but hey, the grammar and style have improved somewhat. The story is nicely tied up at the end with a very satisfying, but a bit open ending. It really was great to be able to read a standalone, and know there wasn’t going to be two to four more books after it just to get a decent ending.

Final Thoughts: If you like the first one, you’ll more than likely like this one too. If you hated the original Twilight, I can’t fault you, but try to keep an open mind. I fully went into this wanting to read it just to poke fun at it and to dislike it. But damn. It was a worthy read. Plus, when you open to read the forward, you get an immediate apology from the author. Sure there are a fair few cliches and really dumb parts, but it makes up for that in likable characters. It also doesn’t hurt that when you buy it, you get this retelling, plus the first book, all bound in a really nice hardcover.