Thor Goes Whaling “In the Heart of the Sea” 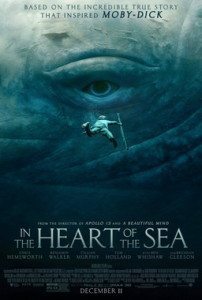 There’s not much to say about In the Heart of the Sea, and that’s not necessarily a bad thing. With a loose connection to Herman Melville’s Moby Dick, the film is more accurately a representation of Nathaniel Philbrick’s In the Heart of the Sea. While the trailers suggest action and adventure on the high seas, it’s really more a story about being stranded at sea. And that’s a hard movie to sell, if we’re being honest.

The biggest benefit that In the Heart of the Sea has is it’s presence on the big screen. From rapturous squalls to thundering waves, the film paints a majestic image of the ocean and of seafaring. Aptly, the most interesting character in this story is nature herself. It’s pretty obvious that the budget went to the special effects of the whaling and of the white whale specifically.

Given the subject matter, of being stranded out at sea, it’s not easy to make a story like this captivating and interesting. It’s less swashbuckling and more starvation and dehydration, but the story remains interesting to watch. The unfortunate truth is that while In the Heart of the Sea wasn’t a poor film, it wasn’t a great one either.

And it’s not for lack of trying from most of its cast, including Chris Hemsworth as the leading man. While the film itself was a frame narrative, with the story of the Essex Whaleship being told by a member of the crew to a young Herman Melville, the story outside the story often felt more emotional than the one within. Ben Wishaw does a fine job playing Melville, while Brendan Gleeson is surprisingly heartfelt in his performance as Thomas Nickerson.

It would be a mistake for those who enjoy Melville’s Moby Dick to assume that this will be as complex a tale as the one Melville weaves. The plot is fairly straightforward, and while it bears the similar message of man versus nature, it is, at most, a story about whalers stranded.

Final Thoughts: In the Heart of the Sea benefits largely from a viewing from the big screen. The movie does it’s best with the material and crafts an interesting story, but it lacks anything deeply impactful, which is what ends up making it forgettable.