Surface Tension #1 is Here to Make You Fear the Sea 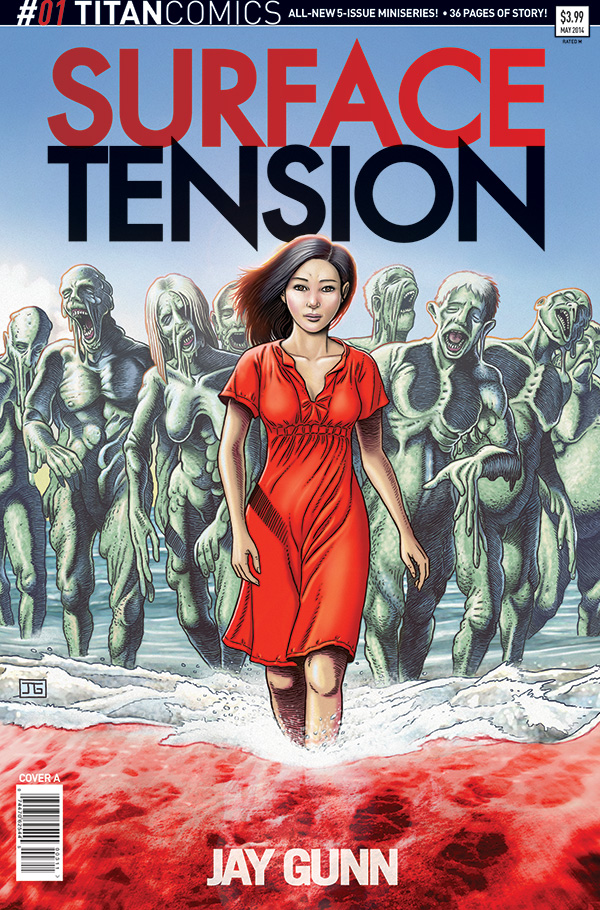 Thalassophobia – the fear of the sea – is real in Surface Tension from Titan Comics. Described in initial press releases as, “The Walking Dead​ meets ​Princess Mononoke,” Surface Tension imagines a terrifying end-of-the-world scenario where humanity is ultimately consumed by the sea. To be honest, it’s been a lot more of The Walking Dead-esque than anything else so far but that’s not a bad thing.

Surface Tension takes place a little over a year after the end of the world. After ominous coral formations around the world suddenly began to appear off the coasts, people began to flock to the water. People were consumed by an insatiable need to throw themselves into the sea and wouldn’t let anything get in their way – even their loved ones. Eventually, when they made it to the water, they eventually just seemed to melt away.

No one ever returned from the sea.

The several hundred people who somehow managed to avoid the call are shocked when their isolated, perilous lives are interrupted by the return of two people – alive but unnaturally blue. Both are known to people on the island and one may have a very direct connection to the devastation that has nearly driven humanity to extinction. But they aren’t the only things to come back from the sea. And what comes next is coming for everyone.

Unlike a lot of comics, Surface Tension doesn’t really try to keep the origins of their apocalyptic event hidden. Through the background of Megumi Suzuki we have a very good idea of what happened – and what may happen moving forward. I won’t spoil the backstory but I will say it’s a nice change to some post-apocalyptic series that never really address the origins of whatever tragedy has unfolded.

Granted, the backstory does come at the expense of any real character development for anyone but Megumi and her former boyfriend, Eric. Considering this is a five-issue miniseries that probably means we’re going to be focusing a lot more on moving the plot along and Megumi’s story than anything else (though there is a second person who returned from the sea so we’ll hopefully at least get some of his story, too).

The story is pretty strong and I’m looking forward to learning more about the characters, the settlement in Breith, and everything else. I’m really hoping we’ll get to explore a bit more of this refuge and maybe find out a bit more about how it came to be since so much of the first issue was focused on what happened before everyone basically got absorbed by the sea.

My only issue with this comic is the art style. It’s not bad, but the character designs can be a bit weird. There is one panel where Eric looks basically like he’s got demented shark teeth or something – and this is before things get crazy. It’s just a little off. But that doesn’t really distract from most of the book and it actually works really well for everything but the character designs so not a really big issue. Plus Jay Gunn gets major props for both writing AND illustrating this book. Seriously props.

This is going to be a pretty fun series, I suspect. It’s a good blend of horror and mystery – plus it takes a pretty unique angle on post-apocalyptic fiction. If you’re a fan of The Walking Dead, Spread, or similar comics I’d recommend this one easily.