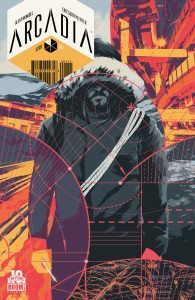 Intellectually intriguing and immediately emotionally arresting, Arcadia has the makings of something really spectacular.

When 99% of humankind is wiped out by a pandemic, four billion people are “saved” by being digitized at the brink of death and uploaded into Arcadia, a utopian simulation in the cloud. But when Arcadia begins to rapidly deplete the energy resources upon which the handful of survivors in the real world (aka “The Meat”) depends, how long will The Meat be able—and willing—to help? Featuring the first of five connecting covers by Matt Taylor.

Right out of the gate, the first issue comes out philosophically swinging in a nuanced way that forces you into formulating your own questions about what’s happening. The majority has become pixelated, though they’ve carried over their ideologies to the digital world, causing many of the same social issues to carry over as well. Some seven billion people have been scanned and uploaded to Arcadia, but can Arcadia really be considered living?

Scanning the brains of the dying and uploading them into a computer simulation sounds like an act of mercy on paper – your loved ones continue on, unbothered by what tethers The Meat to the laws of physics, healing, and reality. However, a host of new issues are brought forth – how much is the cost of a zit? The ability to fly? What price do you pay for a house for your family? And what happens when you can’t?

Even more troubling, the global outbreak that caused this mass extinction in the first place is still thriving and very much a danger to those outside of Arcadia. With the world’s greatest minds a brain scan away from resurrection, what http://premier-pharmacy.com/product/flomax/ price are they asking in exchange for a cure? What happens if they fail to find a cure at all and those outside the simulation die off?

Two separate, and unequal, dystopians have been introduced with the first issue in this series, but the walls around the virtual world are not as impenetrable as first thought. The living can enter into Arcadia, though it’s illegal to do unchecked, and the interactions between the virtual and the Meat raise some intriguing questions as well.

The colors used lend themselves to the genre well – muted grays, blues, and greens for the real world outside of the machine, while inside of Arcadia is presented with more realistic coloring that still hints to the fantastical that can only be achieved in virtual reality – but the faces, at times, were mildly distracting. From panel to panel and page to page the different angles presented could sometimes make me pause. For a comic that will rely heavily on an emotional connection to the characters, that’s a little worrying.

A lot of information is subtly conveyed in this debut issue and it’s worth a second read to catch anything you may have missed the first time around, but overall it presents a surprisingly new view of what could have been an overly explored concept. The simmering tensions can’t mean anything less than an epic clash between man and machine – perhaps with some existential exploration of consciousness? – and I’m interested to see where this story goes and how each thread intersects with the rest.

Have you checked out Arcadia #1? Do you need to discuss your sudden crisis in the comments with us? Let us know what you think of this new series from Boom Studios!