“The Game of Love and Death” is Death Done Differently

The Game of Love And Death 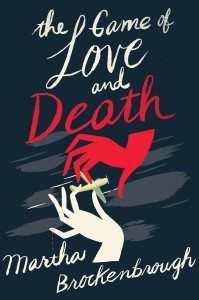 Over centuries, Love and Death have been playing against each other.

Each one picks a human player for their side, sets the conditions of victory, and rolls the dice. The stakes? If Death wins, one or both of the players die. If Love wins, the players get to live the rest of their natural lives. Both Love and Death aren’t allowed to influence the players with their powers directly as to make the Game a fair fight.

Too bad Death has always won.

We’re talking big wins: pairs of the star-crossed variety ranging from Helena and Paris of Troy, Anthony and Cleopatra, to Romeo and Juliet have been chosen to play and lost the Game.

Flora: Death’s player. She’s an aspiring pilot and her family owns the Domino jazz club, where she works as a singer. She’s African American.

The book follows the progression of the romance between Henry and Flora, all the while Love and Death pull marionette strings behind the scenes. Will Love finally manage to help overcome the couple’s obstacles and win?

Anthropomorphizing Love and Death isn’t a new concept – The Book Thief did the same thing to tell a tragedy during Nazi Germany. The Game of Love and Death does it better. In a surprising choice, Death is a female, and Love is male. In another surprising turn, Love’s tactics are more sinister than Death’s.

Death seems cold, but she has emotional conflict and a strong sense of duty which flighty Love lacks.

Readers can understand the origins of Love’s motivations, even if they don’t always agree with them, but Death and her actions remain a mystery throughout most of the story. I spent most of the book wishing that we got more of Death’s narrative. She was arguably the most compelling character in the novel, the most morally ambiguous, the most interesting, and she got some of the least page time.

I also wish the author was clearer and spent more time explaining the finer points and rules of the Game between the players so the readers could understand Love and Death’s powers and which moves were allowed.

Other than those two minor complaints, I loved this book. The prose is very well written – it matches the book’s jazz age 1930’s setting partially because it’s so melodic.

What The Game of Love and Death does really well is take an old concept (anthropomorphic characters) and gives the tale a new spin and different stakes. Then, it follows a unique premise with solid prose and character development.

Final Thoughts: The book’s plot is extremely tight and well-written, but the last pages of the action at the conclusion of the Game are a bit confusing. Stylistically, this book is gorgeous. Death’s characterization as a woman is new and her mysterious motivations left me wanting more. Overall, I highly recommend this book to anyone who likes reading adventure YA novels with romantic subplots.

A COPY OF THIS BOOK WAS PROVIDED BY EDELWEISS: ABOVE THE TREELINE FOR REVIEW.