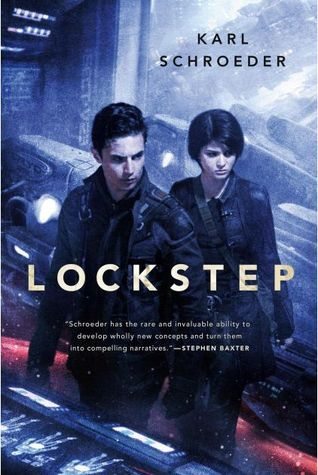 This is one of those books that’s hard to review not because it isn’t good but because it’s so hard to explain to other people why it’s good.

I’m not usually a fan of high science-fiction (or high fantasy for that matter) but I took a shot on Lockstep because the premise was too intriguing to pass up. I tend to read a lot more young adult fiction than anything else and Lockstep seemed like it had a lot of cross over appeal. I don’t believe it was published as YA fiction, but it’s definitely gotten portrayed as such online – and that’s not necessarily a bad thing if it brings in an audience of readers!

And Lockstep is a book that deserves to be read.

I will say, though, it’s not the easiest read. The story moves quickly and it never really loses you. Even as Toby McGonigal wisely lays low and plans his movements, things are constantly in motion. At no point did I find myself bored or overwhelmed as far as the story and characters were concerned. In fact, I read with rapt attention waiting to see what would come next.

However, the world-building can be confusing. Toby locks himself into hibernation after being lost in the depths of space only to wake up 14,000 years later to a very different future. It’s a future where mankind is spread out across the stars living for thousands of years in a crazy system called ‘the lockstep.’ The lockstep preserves resources and increases the human life span. The idea of stopping and hibernating isn’t difficult to understand, but the math that goes along with the system can be complicated. There are worlds that do not operate within the lockstep, or those that have been punished by being forced into different sleep cycles, ones that will rapidly age them in comparison to the rest of society.

Once you wrap your head around that, however, it becomes a lot easier to grasp. (Or you can just do what I did: smile and nod and just roll with it.) And it becomes fascinating to think about.

Another thing I really liked about Lockstep was that it was very much a family drama. Toby McGonigal’s family heads to the stars to colonize their own vast enterprise. But 14,000 years later his family is still in power and his siblings – now physically just decades older – are ruling things. His brother is a tyrant who fears him and would rather destroy him. His sister would control him… or probably destroy him.

Power, corruption, and family are a huge part in this story and it’s really great to see that all unfold from the point of view of a seventeen year old whose last memories were playing computer games with his baby brother and living at home, happily. It’s emotional and heart-wrenching at times. (I mean, how would you feel if you effectively traveled in time thirty years and found out your kid sister was now a dictator?)

Despite being very much ‘hard science fiction,’ Lockstep is a character driven story. From Toby and his family to the rebels and renegades who help him, it’s the character that drives the story – not so much the actual science fiction future in which it is set. That said, I doubt non-science fiction fans will enjoy it. But if you’re a young adult fan looking for some good, hard sci-fi – this could be the book for you.

A REVIEW COPY OF THIS TITLE WAS PROVIDED BY THE PUBLISHER VIA NETGALLEY.