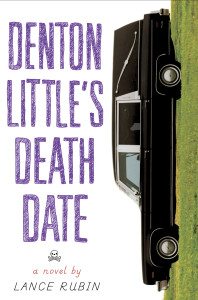 We’re super excited to be joining Me, My Shelf, and I Tours in promoting this new book, Denton Little’s Deathdate by Lance Rubin. We always love having the chance to highlight great new reads and this is definitely one to watch.

Denton Little’s Deathdate is a unique take on the YA genre – it balances its heavy theme with a compelling mystery and off-kilter humor. It’s a refreshing read and you should definitely grab a copy the first chance you get!

At the very least read on to find out a bit more about the book and enter the MMSAI Tours giveaway below. Maybe you could win a copy of your very own!

Fans of John Green and Matthew Quick: Get ready to die laughing.

Denton Little’s Deathdate takes place in a world exactly like our own except that everyone knows the day they will die. For 17-year-old Denton Little, that’s tomorrow, the day of his senior prom.

Despite his early deathdate, Denton has always wanted to live a normal life, but his final days are filled with dramatic firsts. First hangover. First sex. First love triangle (as the first sex seems to have happened not with his adoring girlfriend, but with his best friend’s hostile sister. Though he’s not totally sure. See: first hangover.) His anxiety builds when he discovers a strange purple rash making its way up his body. Is this what will kill him? And then a strange man shows up at his funeral, claiming to have known Denton’s long-deceased mother, and warning him to beware of suspicious government characters…. Suddenly Denton’s life is filled with mysterious questions and precious little time to find the answers.

Debut author Lance Rubin takes us on a fast, furious, and outrageously funny ride through the last hours of a teenager’s life as he searches for love, meaning, answers, and (just maybe) a way to live on.

Denton Little is slated to die tomorrow. He doesn’t know when or how, but he’s known his deathdate since he was three years old.  Then again, so does everyone else.

What’s going to kill Denton? Is it the mysterious purple, red-dotted rash creeping up his leg? Will it be his girlfriend’s shotgun-toting ex-boyfriend? Or is it something else entirely? Denton Little’s Deathdate takes place in an alternate universe where a company has developed a scientific technique to determine exactly what day each person will die.

Other than his early deathdate, 17 year old Denton’s life is pretty average. He goes to high school, he has a loving, if not overbearing, stepmother, a devoted girlfriend, and a best friend, Paolo, who’s going to die a month after Denton does.

The book follows Denton through his last days before his deathdate (which falls on the same day as prom – the planning committee callously refused to move) while Denton prepares for his demise. He attends his own funeral and then prepares for his Sitting, a wake of sorts where Denton is surrounded by friends and family in a room while he waits to die. It’s all very neat.

Well – it would be neat – except Denton’s deathdate doesn’t go according to plan.

When a friend of Denton’s mysterious biological mother turns up at his funeral and warns Denton not to trust anything or anybody, what follows is a madcap race against the clock which leaves readers questioning the truth about Denton’s family and guessing how Denton dies.

With a series of near-death experiences, the book had the potential to veer into very dark territory, but the author handled Denton’s impending death in a way that kept me invested in a story that promises to kill its very likable main character.

Amazon excerpts compared this author’s style to John Green, but I think the off-kilter humor in this book is more similar to the satire of the late, great Terry Pratchett, and I confess that I didn’t want this book to end. Denton Little’s Deathdate is a refreshing YA novel with a unique premise and the humor and heart to back it up.

I won’t spoil the ending, but there are a few unanswered questions at the end of the novel – if the author does write a sequel to this novel in this universe, I hope that it has the same charm and humor as Denton Little’s Deathdate does.

A Note From The Author

After years of being a GoodReads reader, I am delighted to now also be a GoodReads author. My first book, DENTON LITTLE’S DEATHDATE, comes out from Knopf in Spring 2015.

I’m from New Jersey. It’s a way better state than people give it credit for. I went to Brown University, and now I live in Brooklyn with my wife and son. They are delightful people.
Before I became an author, I was primarily an actor. “Anything I’d recognize you from?” you might ask. Probably not, unless you watched the short-lived NBC hospital show MERCY, in which I guest-starred as a patient with a naked sleepwalking problem.

By my late 20’s, the acting business was making me sad, so I started to focus more on writing.

Now I’m primarily a writer and it makes me incredibly happy.http://lancerubin.tumblr.com/

A REVIEW COPY WAS PROVIDED TO NERDOPHILES BY THE PUBLISHER AS PART OF A  BOOK TOUR SPONSORED BY ME, MY SHELF, AND I TOURS.