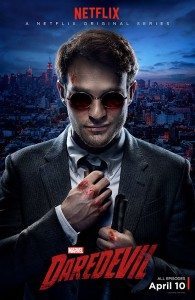 Daredevil doesn’t have the best reputation.

I’m not talking about the character or any of his various comic stories. I’m referring to the 2003 film starring Ben Affleck and Jennifer Garner. A film caught between two eras of superhero films, Daredevil the movie is known for being one of the worst superhero movies of all time that somehow produced an even worse sequel.

So as you can imagine, when Marvel announced that the newly re-acquired Daredevil was going to be the focus of the first of four Netflix Original Series, the bar was admittedly pretty low. The question was how they were going to clear it.

Lucky for us, not only does Marvel’s Daredevil not only clear bar, it reset it so high that between it and Agent Carter, it’s now the standard the rest of the MCU should be held to.

The thirteen episode long series takes place in the Manhattan neighborhood of Hell’s Kitchen, sometime after the Battle of New York. The city is rebuilding and real estate prices are at an all time low, allowing the two fresh faced lawyers of Matt Murdock (Charlie Cox) and Foggy Nelson (Elden Henson) to start up their own firm. Within hours, they get their first case of defending Karen Page (Deborah Ann Woll), a woman working for Union Allied Construction who has apparently stabbed a man to death. Foggy thinks about getting her a plea deal, but Matt somehow has a hunch that she’s telling the truth.

If you don’t already know, Murdock is also our titular hero, who spends most of the series being referred to as “The Man in the Mask” or “The Devil of Hell’s Kitchen.” The series jumps right into him being the badass that he is, with the first scene being him beating up criminals involved in a human trafficking ring. Using his heightened senses, the blind Murdock manages to beat them and free the girls. This also gives us an idea of just how Murdock’s abilities work, setting the tone for a lot of the fight scenes to come and cutting out any cheesy references to sonar.

Instead, the series gives us more of a sense of what Matt hears while he’s fighting with only one look into the “impressionist painting” his senses create for him. It works effectively, giving us a way to understand how Murdock’s abilities work without dragging us into visual effects hell. Just watch the fight scene from the end of episode two if you want an idea of what this series is like on those terms, but then prepare to have your mind blown.

Cox’s turn on Murdock is also extremely effective. It helps that the writing is nuanced enough to give us an understanding of just how complex Matt is as a character, but Cox knocks it out of the park by bringing a certain charm and sadness to Matt. This especially becomes true in the scenes where Matt talks to his preacher, wrestling with the complicated nature of trying to be a hero in a world on fire.

Of course, a main actor is only as good as his supporting cast. Lucky for us though, this series has it in spades. Henson as Nelson manages to be one of the best comic relief characters I’ve seen in ages, which only makes his own sadness as a character later on even more heartbreaking. The women in this series are also complicated characters in their own right, with Woll as a tenacious Karen Page who runs so much deeper than you’d expect and my #1 crush Rosario Dawson being the best no nonsense nurse around with Claire Temple. There’s also Wai Ching Ho as Madame Gao, an elderly woman running an underground drug ring who probably ends up being the biggest badass of the series while setting up the threads for the Iron Fist series.

You can’t really talk about any performance in this series though without talking about Vincent D’Onofrio as Wilson Fisk aka Kingpin and for good reason. Sorry Loki fans, but D’Onofrio probably turns in the best performance of a villain in the MCU so far. His take on Fisk is the definition of sympathetic and complicated, giving us insight onto his childhood and his love story with Vanessa Marianna (Ayelet Zurer).

Yeah, that’s right, the VILLAIN gets the love story in this one and it’s fascinating. At the same time, the show never uses this as an excuse to try and redeem him for his actions. He’s brutal and awful, but you still understand who he is without wanting him to succeed. I feel like Agents of S.H.I.E.L.D. needs to be taking notes on this.

Speaking of Agents of S.H.I.E.L.D, you might notice that Daredevil is… well… considerably darker than its network counterpart. The violence is more gruesome and there’s a bit more liberty with the characters cursing than there would be in a typical MCU outing. Usually, this is the mark of a property trying to go grimdark for the sake of seeming more mature, but it never really feels like Daredevil is doing that. There are still lighthearted moments and tragedy doesn’t befall without reason or to just shock the viewer.

It all plays into the world of Hell’s Kitchen, where there’s no Thor or Tony Stark to save the day with magic or glossy technology. It’s rough and tumble with corrupt cops and ill-intentions. It really reminds me of why street level hero stories tend to be my favorite Marvel stories. But if it gets too dark, just give yourself a handy little reminder of the Marvel Universe.

Final Thoughts: Thrilling and dark, Daredevil sets a new bar for properties in the Marvel Cinematic Universe. Between the stellar acting, writing and cinematography, it has me even more excited for what’s to come on the horizon for Marvel’s Netflix deal.