Jupiter Ascending Is Visually Sexy But Bores In Story 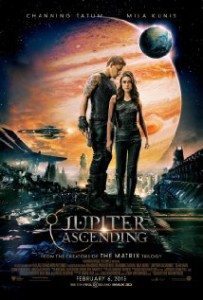 When the trailer first came out for Jupiter Ascending, I was really excited about the movie. Everything looked so awesome and visually stunning (can you expect any less from the Wachowskis?). That is where it ends though, no matter how beautiful this movie may have been, it fell flat on its face in terms of story execution and acting (much like Matrix Reloaded & Revolutions…but those don’t exist so let’s just sweep it under the rug).

Jupiter Ascending is about Jupiter Jones (Mila Kunis), she’s a very normal young woman that hates her life as a cleaning maid and loves astronomy. She’s saving up money to buy a brass telescope, the same one her dad had before she was born. Unbeknownst to her and the rest of Earth, there is a vast network of alien empires in the universe. One of the matriarchs of the strongest, most powerful empire died and her three children Balem (Eddie Redmayne), Titus (Douglas Booth), and Kalique (Tuppence Middleton) are all clamoring for the inheritance and heir position.

However, since there are so many genetic combinations the lottery happens to fall into Jupiter’s lap. She is a direct genetic match with the matriarch which makes her an heir too… and the siblings want her dead. Caine Wise (Channing Tatum) is sent to capture Jupiter and take her back to Titus, but somewhere along the road he starts protecting her because he finds out they want her dead. Caine is a splice, a genetically engineered warrior that’s been combined with wolf DNA. They both go through the universe avoiding capture and death. There are a lot of last minute saves which become very boring and predictable. This movie felt very superficial. The story was never developed because it was very one dimensional. There were a lot of new concepts and they don’t need to be crammed down your throat to be explained, but some explanation is needed. You can’t just introduce something and expect the audience to immediately understand it. The acting was another disappointment because it felt very childish. The sexual tension between Jupiter and Caine was almost uncomfortable. They had to sneak in that kiss. If you want to see sexual tension done right and not have a romance forced upon you, watch Pacific Rim. Redmayne did very well, but other than him it was all very wooden.

Final Thoughts: Jupiter Ascending was very beautifully done. The universe, the warships, the fighting and action. Visually there is absolutely nothing to complain about. Everything else about it you can complain about. The superficial story can only entertain you for so long. I would say if you want a visual roller coaster ride then go watch this movie, but if you’re one that cares about story and acting… stay at home and wait for the Blu-Ray.