Originally titled How to Catch a Monster, Ryan Gosling’s directorial debut Lost River first premiered at the 2014 Cannes Film Festival to… not so great reviews.

“Lost River” is a dark fairy tale about love, family and the fight for survival in the face of danger. In the virtually abandoned city of Lost River, Billy (Christina Hendricks), a single mother of two, is led into a macabre underworld in her quest to save her childhood home and hold her family together. Her teenage son Bones (Iain De Casestecker) discovers a mystery about the origins of Lost River that triggers his curiosity and sets into motion an unexpected journey that will test his limits and the limits of those he loves.

While I can’t tell exactly what’s going on in this trailer, I am interested to find out. There are some cool visuals, like the flooded town and the Eleventh Doctor as a delusional gangster. Gosling seems to have cribbed a few motifs from other directors, from Terrence Malick’s atmospheric moodiness and love of landscapes to Nicolas Winding Refn’s dirty neon nightlife. I’m willing to give it a chance considering I ended up liking Gosling’s last starring film Only God Forgives by Winding Refn, which was another film that divided critics at Cannes.

You can decide for yourself if Gosling has the makings of a great director, or if he’s just another pretty face, when Lost River is available digitally and in limited theatrical release on April 10th. 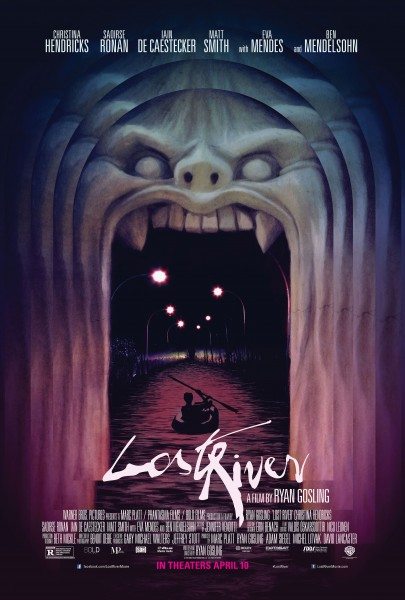