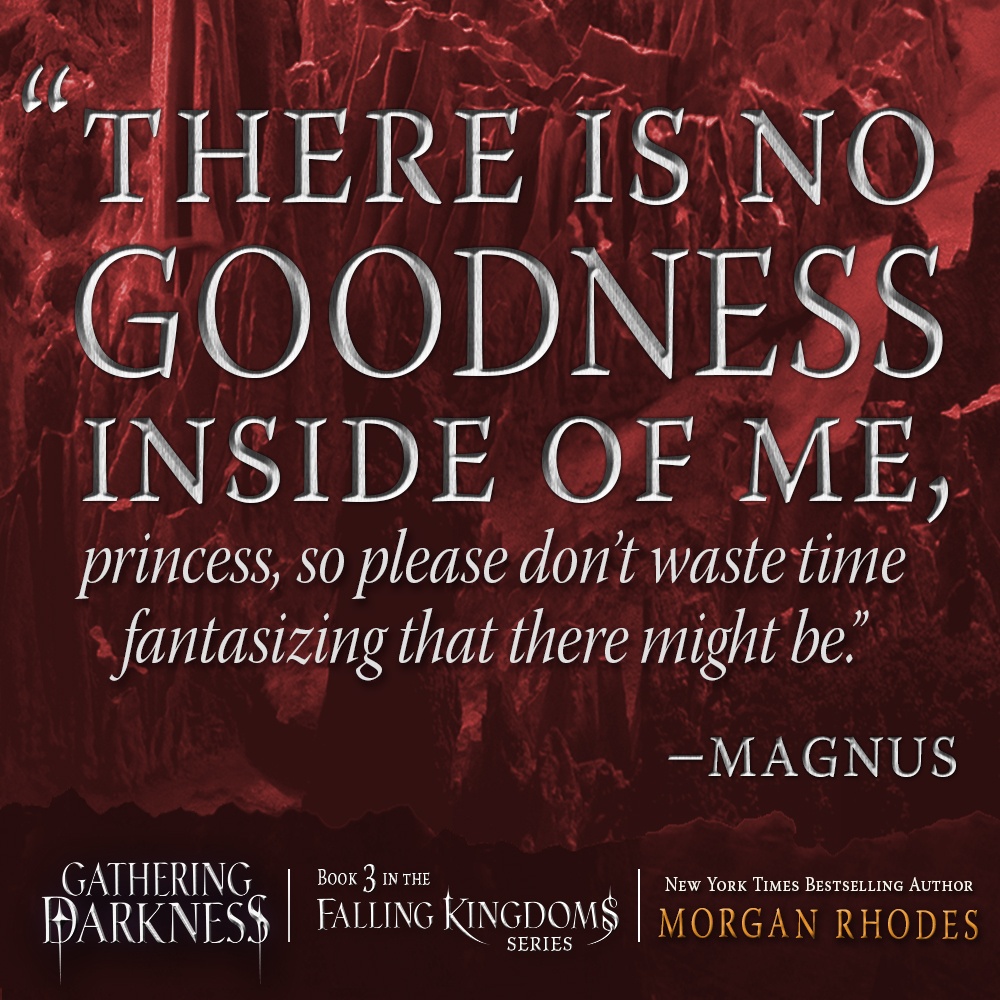 I hope all you readers out there are excited for this one because I know I am. Our friends at Penguin Young Readers reached out to us and gave us this fantastic opportunity to share Morgan Rhodes’ Falling Kingdoms series with one lucky winner.

These books are quickly becoming one of my favorite on-going fantasy series. I’m not just talking young adult fantasy here. I mean fantasy in general. And I’m sure you’ll think the same. I was sent a copy of the series so I could familiarize myself and it’s just fantastic. I have been absolutely blown away. I’ve blazed through the first two books already and I’m almost ready to start the third. I’m going to be so disappointed when I read through the third one because I’ll have to wait another year to read more! That is how good these books are. Seriously.

These are books that beg to be read. They aren’t kidding when they say these books are the perfect blend of Game of Thrones and Graceling. This is an epic fantasy well suited for teens, young adults, and really anyone who loves the genre.

You need to have your own copy and that’s something we can help you with!

In fact, you’ll not just get a copy of the first three books in the Falling Kingdom series but also a dartboard featuring a map of the kingdoms courtesy of Penguin Young Readers.

Take aim at your enemies and read a fantastic fantasy series. It doesn’t get better than that. Enter below and if you want to know more about the series read on after the contest widget!

Celebrate the Release of #GatheringDarkness and Win a Copy of the #FallingKingdomsSeries!

In the three kingdoms of Mytica, magic has long been forgotten. And while hard-won peace has reigned for centuries, a deadly unrest is simmering.

As the rulers of each kingdom grapple for power, the lives of their subjects are brutally transformed…and four key players, royals and rebels alike, find their fates forever intertwined. Cleo, Jonas, Lucia, and Magnus are caught in a dizzying world of treacherous betrayals, shocking murders, secret alliances, and even love.

In AURANOS, privileged Princess Cleo is forced to confront violence for the first time in her life when a shocking murder sets her kingdom on a path to collapse.

In LIMEROS, the king’s son, Magnus, must plan each footstep with shrewd, sharp guile if he is to earn his powerful father’s trust, while his sister, Lucia, discovers a terrifying family secret about her birth that will change everything.

In PAELSIA, rebellious Jonas lashes out against the forces of oppression that have kept his country cruelly impoverished—and finds himself the leader of a people’s revolution centuries in the making.

Witches, if found, are put to death, and Watchers, immortal beings who take the shape of hawks to visit the human world, have been almost entirely forgotten. A vicious power struggle quickly escalates to war, and these four young people collide against each other and the rise of elementia, the magic that can topple kingdoms and crown a ruler in the same day.

The seeds of revolution have been sown…but in Mytica the lust for power reigns supreme.

THE REBELS forge ahead. Princess Cleo slays with sweetness—and a secret that might control Lucia’s magic—as she and vengeful Jonas lead the hunt for the all-powerful Kindred.

THE KRAESHIANS join the fray. Ashur and Amara, the royal siblings from the vast kingdom across the Silver Sea, prove to be just as ruthless as they are charming as they manipulate their way to victory.

THE WATCHERS follow Melenia out of the Sanctuary. They ally, in the flesh, with King Gaius, who vows to use Lucia’spowers to unveil the Kindred.

And which side will Prince Magnus choose, now that he’s been betrayed by everyone he’s ever loved?

Morgan Rhodes is the New York Times bestselling author of the FALLING KINGDOMS series. As a child, she always wanted to be a princess—the kind that knows how to wield a sharp sword to help save both kingdoms and princes from fire-breathing dragons and dark wizards. Instead, she became a writer, which is just as good and much less dangerous. Along with writing, Morgan enjoys photography, travel, and reality TV, and is an extremely picky yet voracious reader of all kinds of books.