It’s the most wonderful tiiiiime of the year… The time of year that gets us FREE DAILY COMICS FROM COMIXOLOGY!

Comixology’s 12 Days of Comics promotion is back for a third year running! What is the 12 Days of Comics, you may ask? It’s simple, Greg. Every day between December 11th and December 22nd, Comixology will offer a free comic for 24 hours. Which comics, you ask? Well, you never know! That’s part of the Christmas surprise! 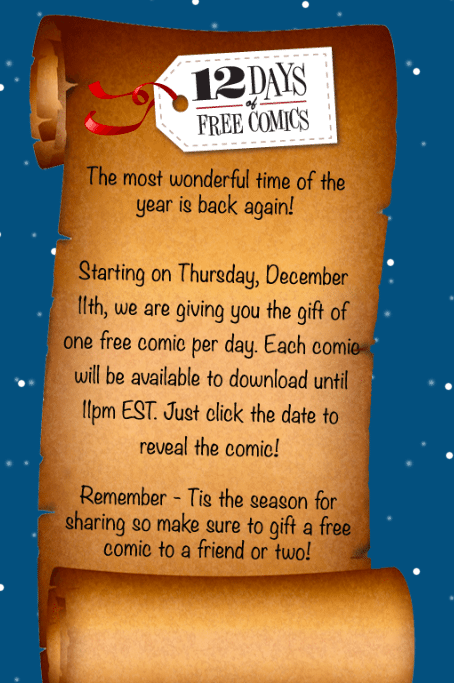 Last year, Comixology was especially good to us. Among the comics they gave away were Hawkeye #1, Lazarus #1, Sandman #1, and the first issue of Gail Simone’s run on Red Sonja. It’s a great way to discover new series that you might have missed during the year and figure out what series you want to be getting for others (or you) for the holidays!

Today, Comixology offered up the creepy first issue of Eisner Award winning The Wake by Scott Snyder and Scott Murphy. This series would have not been on my radar before, but now the trade of all 10 issues is on my wishlist! Who knows what else waits for us between now and the 22nd! Besides the gift of awesome comics, that is. Oh Comixology, how I love thee.