The Resurrectionist: The Lost Work of Dr. Spencer Black 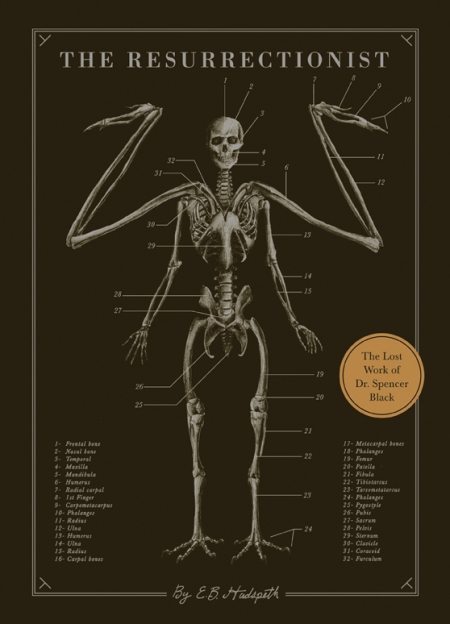 I love pretty much everything Quirk Books puts out, so when I was approached with the opportunity to read and review The Resurrectionist I had to go for it. Honestly, the cover alone should be reason enough for anyone to want to read this book. In true Quirk Books fashion, they spared no expense at making this a great looking book. The cover is beautiful in it’s macabre nature, as is much of the intricately illustrated book.

Pitched as two books in one, The Resurrectionist tells the story of Dr. Spencer Black, who is described as something of a renown medical prodigy whose work has since been mostly lost to time and it’s own obscurity. The set up itself presents a sinister sort of air around the book.

Is it all real?

The presentation and impeccable writing make you question that, even though you know the truth.

The first half of the book tells the history of Dr. Black and reads like the biography of a curious man whose future was once promising before it all fell apart. A gifted scientist and physician, he was caught up in some arguably insane beliefs that genetic deformities in humans were not necessarily deformities but hidden DNA markers left over from earlier ancestors. These ancestors were not akin to homo habilis but to mermaids, chimeras, and other creatures of pure myth.

At times tragic and at times deplorable, Dr. Black’s biography tracks his history from childhood through medical school and into his adult life. It talks about his grand achievements as a physician and his eventual fall from grace, which saw him turn into little more than a freak show carny peddling impeccable taxidermy as the sort of fanciful creatures he imagines once existed.

The ending of the first half of the book is as much an enigma as the end of the second and it leaves you with a real sense of foreboding as you can only imagine the sort of things that must have transpired to bring Dr. Black to the point no return in his obsession and insanity.

The second half of the book as a whole only adds to the mystery surrounding Dr. Black and his work. It is a full anatomical break down of the creatures he proposes once existed. Some of them he claims are based on real specimens he discovered or observed in his extensive travels abroad. Most merely show bone structure, hypothesized muscular design, and other easily fabricated data.

Others show far too much detail for a man simply imagining what these creatures would look like.

The Resurrectionist is an incredible book – especially for those who like to fuse their hard science with their science fiction. An insane amount of detail went into creating this book, the illustrations, and piecing together a dark history that reads like a lost historical text. It’s perfect for fans of that sort of thing and even for fans of American Horror Story: Freak Show, as Dr. Black’s story sees him traveling with the classic sort of freak shows the freaks pine after in the series.

Final Thoughts:
Totally worth a read just like pretty much every single book Quirk Books publishes. But this one really is a thing of beauty. The illustrations are an incredible selling point and even if you’re not the sort of person to usually be into this kind of thing it’s worth a look anyway. The amount of detail is stunning.