I saw Interstellar last week and I like it less every time I think about it. Sure, it’s an incredibly pretty movie and the cast is mostly quite good, but the more I hear people complain about it, the more I agree with them. Nolan wastes an enormous amount of dialogue showing off how much research he’s done; it’s far too long and the pacing feels weird; Hans Zimmer’s music has started to become a parody of itself. But my biggest complaint remains the same as when I first walked out of the film: the ending twist is incredibly stupid.

Not only does it stretch the definition of implausible, it also doesn’t make sense. Even if we’re to believe the outright silly idea that Cooper’s been communicating with his daughter across time and space through her bookshelf, do we get any real explanation as to why it’s happening? Apparently these “others” have set up this system for Cooper to make sure his daughter eventually invents the principles that will save humanity, but what motivation do they have to help humans in the first place? And given these guys apparently have control over all time and space, is this really the most efficient system they could come up with? No, of course it isn’t, they only do it this way because Nolan wants it to work on a dramatic level, but it doesn’t do that either. I felt so unwilling to buy the circumstances that I couldn’t feel connected to the characters at this point.

The thing is, Interstellar didn’t need a big twist. It already had two smaller twists – that Plan A was never really an option, and that Dr. Mann had lied in his reports – and both of those legitimately change the course of the plot, as well as our understanding of the characters. Meanwhile, would it actually change anything in the plot if the aliens had been communicating with Murphy directly as we initially thought (and, for that matter, why didn’t they)? Not particularly, no – the twist only exists for the big reaction it tries to instill. That leads to shallow, dispensable filmmaking that loses its impact after the first watch.

It hurts to whale on this film so hard, given that I usually think of Christopher Nolan as one of my favorite directors. But watching Interstellar, I realized he’s been caught in the trap of the twist.

The trap of the twist is a common one, and it comes from the classic mistake of an artist misunderstanding what exactly people like about his work. If one of their early films receives praise for their twist, they start to consistently build films around the idea that there has to be a twist at the end because that’s what people seem to like about the first one. However, they miss what exactly worked about that twist the first time, instead relying on the very presence of a twist to make the movie. The most famous victim of the trap is M. Night Shyamalan, who’s so deep in it that most people don’t remember his films for anything except the twists. Others include Chuck Palahniuk, the Bioshock games, and now Nolan.

Retrospectively, it surprises me that it took me so long to realize Nolan has fallen victim, given that all of his movies thus far except The Dark Knight have big twists (which, probably not by coincidence, happens to be his best film). Perhaps it’s because, for most of his career, he managed to pull it off. His first full-length film Following was his weakest until Interstellar came out, suffering from a low budget and convoluted non-linear narrative.

But as a mysterious neo-noir thriller, every one of its many twists work pretty perfectly. They solve parts of the greater mystery while also adding complexity to the film’s themes, and they all transpire rather organically. The best movie twists demand that you see the film a second time to rewatch scenes with a new understanding, and few films do this more effectively than Following. 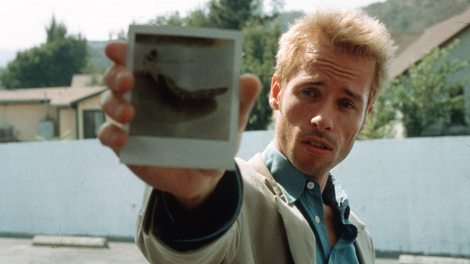 But that’s amateur stuff in comparison with Nolan’s breakthrough film Memento. Again, the twists come in series rather than all at once, and this time Nolan designed the movie such that almost scene was its own reveal. But the final unveiling – that not only is John G already dead, but Leonard has intentionally made actions to eventually convince himself to kill Teddy later – not only contorts the preceding plot in fantastic ways, it brings all the game’s themes to fruition. Leonard’s reality has been warped and transformed the entire film, and him finally taking the leap to create his own reality forces us to look at the film as it applies to us: we only live by our memories and our perceptions, however reliable they may be, and at times we have the tendency to literally lie to ourselves.

It’s only recently that Nolan’s twists haven’t worked as well. In Inception, when Dom reveals that he preformed inception once before on his wife Mal, it does tell us more about both characters and the capacity for shared dreaming, and it definitely advances the themes of the consequences of abusing one’s psyche. But dramatically it doesn’t really work – after all, by the time we learn this, it doesn’t change anything about Cobb’s current situation. And in The Dark Knight Rises, almost any comic book fan was able to guess that Miranda Tate was Talia al Ghul, and even if you didn’t see it coming, what difference did it make? Did it change the stakes in any way? Was anyone connected enough to her romantic stint with Bruce to feel betrayed? And now we’re at Interstellar, and… well.

Nolan knew how to use a good twist once, but he seems to have lost the touch. While the trap of the twist can get the best of them, it’s definitely possible to escape. For instance, the Planet of the Apes movies were once among the worst culprits, playing off the legacy of the classic “It was our planet!” reveal at the end of the first once. This culmulated in the utter nonsense that was the end of Tim Burton’s 2001 entry in the franchise, at which point the franchise holders finally realized a twist won’t always work just because it’s there. Notice how the two most recent ape films don’t have any twists and no one seems to complaining about it, instead hailing them as the best Ape movies since the original? That’s not a coincidence. Hopefully Nolan will learn from his mistakes the same way.