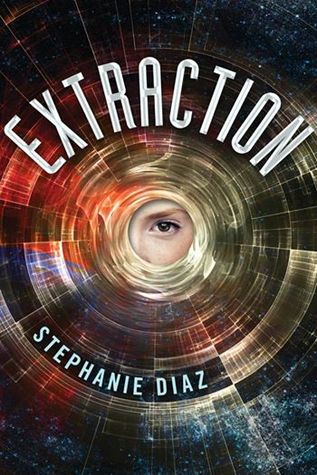 I’m a big fan of science fiction. Give me space, give me technology, give me new societies and expectations. I love that sort of thing and it’s the one thing that’s largely been missing from YA dystopias and science fiction in general. We’re seeing a resurgence in it but, you know, it’s slow coming. Salvage, Avalon, and the Planet Thieves have been among some of my favorite recent books because they find a way to make hard science fiction fit with the genre and the YA audience.

I had a lot of hope in Extraction.

It seemed like this was a book where the author put a lot of effort into world building and as I read further there really was some good, hard science fiction mixed in there. But it was impossible for me to not think of this book as some kind of clone of Divergent and the Hunger Games. I mean, that’s almost exactly what it was from start to finish.

Our heroine, Clementine, lives on the surface of her planet Kiel. Children live in squalor on the surface in glorified work camps and in a few other sectors as well under the earth. They do hard labor, mine minerals, farm, and do whatever else needs to be done basically from birth. Only the strong or smart survive. Every day is a struggle for survival and it’s not unheard of for children – especially the older ones and the desperate ones – to kill, murder, and rape other children. Their only hope is that by the time they reach the age of sixteen they might be ‘extracted’ to the planet’s core where the elite live, raise families, and are assigned life long goals. Otherwise, they get two more years to live and are put to death.

Basically, it’s a terrible way to bring up a society but hey! Who cares? Logic has nothing to do with any of this.

Anyway, so, basically, we’ve got a Hunger Games-esque scenario with children pitted against each other in a fight for survival. Except, instead of lasting days or weeks, it lasts the first sixteen years of their lives and, in the end, if they fail they are killed by the state. And you’ve got your Divergent bit with the testing and ultimate assignment of jobs and what not.

I don’t know, maybe I’m putting too much into it.

But, seriously, the end resolution is that the leader of the people in the core is basically just evil and lying to everyone. There’s so little depth to any of it. It was all so predictable and everything just seemed to work out.

I mean, it does have redeeming qualities.

It’s a very enjoyable read. It’s easy, quick, well paced, and so long as you can suspend belief about how terribly organized this society is and how none of it would actually work out in reality, it’s not a bad read. Predictable and stereotypical, yes. But not necessarily bad. The characters were actually really interesting and diverse. Clementine and boy toy Logan’s relationship was a little intense for me but it’s a YA romance. I have low expectations. Besides, after the life they had led I can see why they’d be so attached.

And the sequel actually does have some potential.

This book might be going from dystopian fiction to hard science fiction by the second installment and that is something I would love to see. I don’t want to spoil to much so I won’t say anything. But that potential is what brings my rating for this book up from two starts to a very hesitant three starts. It wasn’t a bad read but it’s not groundbreaking by any means. The second book could change things.

Final Thoughts:
Fans of the Hunger Games and Divergent who don’t mind such obvious pandering to their demographic and the genre will probably find this book pretty interesting. Clementine, Logan, and the others are all good characters and you care about them and the new friends – and enemies – Clementine makes throughout the book. The real reason to take up this book, though, might not be the book itself but the potential for future world – and I suppose universe building – in the rest of the series.