The Casebook of Newbury
and Hobbes 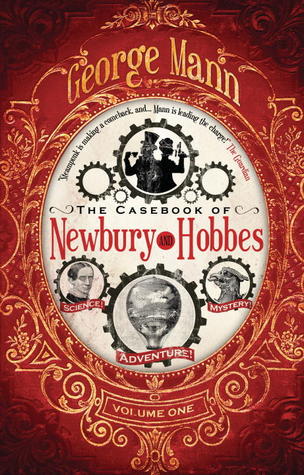 These days Sherlock Holmes is all the rage. Okay, so, let’s be real. Ever since his inception Sherlock Holmes has been all the rage. There have been countless spin-off series and some of the very first examples of fan fiction can be traced back to early Sherlock Holmes fan societies. The detective genre has taken off, especially in recent times, and it’s nice to find clever, unique spins on it.

George Mann has been writing his Newbury and Hobbes series since 2008 and he’s been leading the charge in a slowly growing steampunk movement. His titular characters are a pair of detectives in a Victorian era doused in steampunk elements and the supernatural.

In the interest of full disclosure, I have never read any of the prior Newbury and Hobbes books.

But I wanted to give these short stories a try.

I heard good things about the Newbury and Hobbes books and I figured these short stories might be a good way to break into them. I’ve been trying to read more steampunk these days and why not start with someone who has come highly recommended?

The Casebook of Newbury and Hobbes is a fun series of short stories presented more in the classic style of the original Sherlock Holmes stories. I read them at night before bed, reading through one or two of them at a time. For the most part they stood on their own. It would have been nice to know a bit more about the characters, though.

But I did still enjoy The Casebook of Newbury and Hobbes on it’s own. The steampunk and supernatural elements shone through in cases involving clockwork owls and crazed men trying to place their cheating wives into stasis and trapping all of them together.

Still, I recommend picking up The Affinity Bridge first. I suspect there is far more to Newbury and Hobbes as characters than I know from just reading this book and I recommend you guys do yourselves a favor and get a little background before tacking this one!

Final Thoughts:
The Casebook of Newbury and Hobbes is a nice throw back to Sherlock Holmes and romp through a steampunk past that could have been. But it’s based on pre-existing characters and it doesn’t offer the kind of jumping on point you might hope it would for new readers. The beter plan is to pick up the first book in the Newbury and Hobbes series and go from there.