Sea Change is the Story of a Girl and Her Kraken 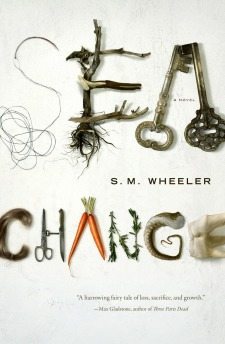 Do you ever come across those books that you almost immediately know aren’t for you and yet you feel compelled to finish the story anyway because you can just tell it’s going to be worth it? That was how I felt about Sea Change almost immediately. I did not like the way the book was written. I’m not exactly sure what it was about the book and how it was written but I just did not like it and while that made it hard to get through the book I powered through.

Because Sea Change was very clearly a unique, fascinating story from the very beginning. From the very first chapter I felt oddly drawn into the story. It’s hard for me to peg exactly whether or not this is a book I would call fantasy, fairy tale, or even young adult as so many people on GoodReads seem to think. It’s certainly more of a fairly tale but not at all in the Disney tradition. It’s very much a Hans Christen Andersen or Brothers Grimm sort of tale and will appeal to people who like a good dark fairy tale story for sure.

The story is about a very unique friendship between a girl named Lilly – the very lonely daughter of a wealthy couple – and her only real friend, a young kraken named Octavius. While her parents generally ignore her or attempt to plan out her life, Lilly learns what real friendship means as her relationship with Octavius develops. They are very different individuals from very different worlds but they really have a very strong bond. Octavius loves Lilly and follows the rules she sets for him not to hurt people and together they explore their two worlds as they exist along the seaside. They spy on merpeople and local villagers and share all kinds of stories and experiences.

But the book really takes off when Octavius is abducted by circus people and Lilly finds that she must go on a wild adventure to try and rescue her dear friend. Along the way she becomes introduced to any number of macabre characters who have their own troubles and crazy characterizations. And Lilly learns a lot about herself, her own potential, and how far she’ll go to save the friend who means so much to her.

Honestly, this story as a whole is devastatingly heartbreaking. From the first moment when Lilly meets Octavius to watching them grow together you really feel the bond they have with one another. It’s terrible seeing it broken by others and watching all the sacrifices Lilly must make to try and get him back. Even though I really disliked the prose and just the way it was written, the story was so freakin’ compelling. I mean, it had it’s low moments. I didn’t really care much for the time Lilly is forced to stay with the group of bandits and there were a number of points in the book where I just felt things stretched on a bit longer than they needed to for the point to get across. None of it was enough, though, to keep me from reading on.

Sea Change is a hauntingly beautiful story about friendship and sacrifice that will leave you with a lot emotions after finishing it that will weigh on you for a good while after. It’s not a book for the feint of heart and it’s not a book that you should go into expecting some wonderful fairy tale jaunt through storyland. It’s a complex book with heavy themes and a strong plot that needs to be appreciated. It’s truly a fantastic modern attempt at crafting a strong, unique fairy tale.

Final Thoughts:
If you can get past the writing style, Sea Change is an absolutely beautiful modern fairy tale that deserves to be read and appreciated. It is, however, a very heavy story and it’ll play with your emotions terribly. Still, it’s well worth the read and I think that readers will appreciate the relationship between Lilly and Octavius as well as the great lengths through which Lilly – and the author – will go in completing her wild adventures.