I am pretty sure that it’s the dream of every Harry Potter to go to Hogwarts. Didn’t we all wait for that acceptance letter even if we were way too old for first year? And yet sadly nothing came but when my friend, Hannah, offered me one of her two tickets to ‘The Making of Harry Potter’ studio tour it was as if all my wishes had been answered. Get ready to be jealous guys because I’m going to tell you all about it. 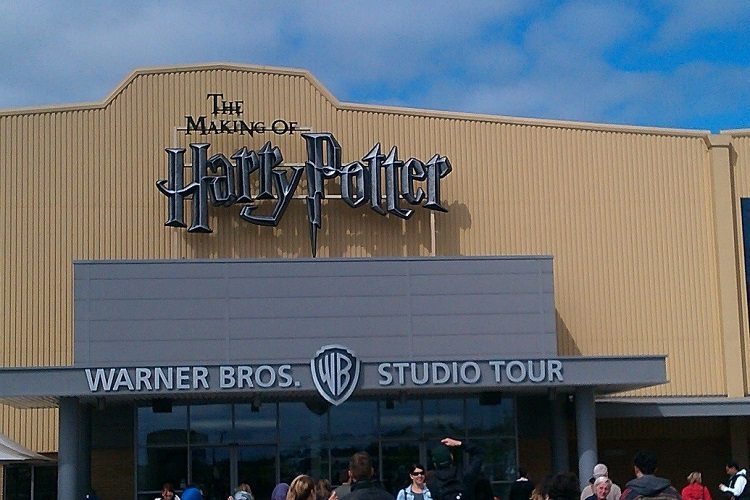 Two days after my final exams were done with and I had said goodbye to secondary school for the good I was whisked off to Hogwarts by the Hogwarts Express only not. We took the tube to Watford where we waited at a specially allocated bus stop with other “Hogwarts” goers. From there our bus took us the short journey to the Warner Bros. studio tour. Seeing the first glimpses of the building from the top deck had me already buzzing with excitement and when we got off I was ready to see EVERYTHING! Of course before Hannah and I could see anything we had to enter the front and line up to have our tickets checked but even that was awesome because all around the large space there were lots of things to see. On top all around the walls were pictures of the actors like Daniel Radcliffe, Emma Watson and Rupert Grint to name a few, and the Weasley’s flying car in floating in one corner and I really loved seeing the cupboard underneath the stairs. 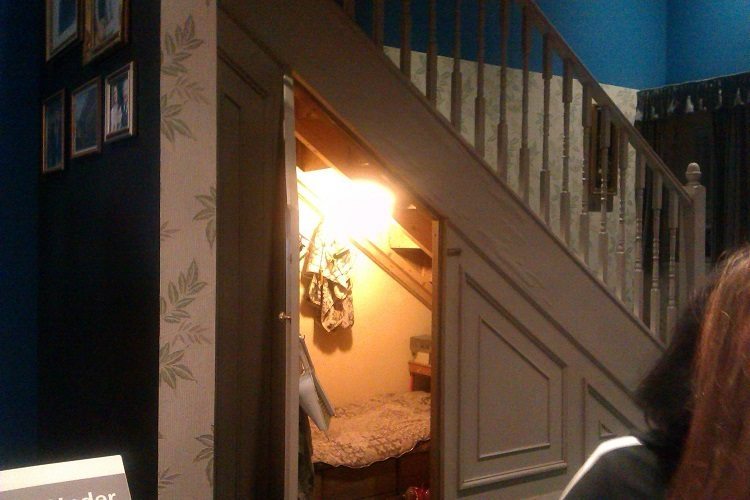 When we finally got through the line a group of us were ushered into another much smaller room with a few instructors, who got us all hyped for the awesome tour we were about to have, and we watched a short video on the screens around the rooms about Harry Potter and its success. When that was done they moved us into a cinema room next door where we watched Daniel, Emma and Rupert talk about working on Harry Potter and how fantastic it was and when the video ended the screen rose up and behind it lay the door to the great hall. 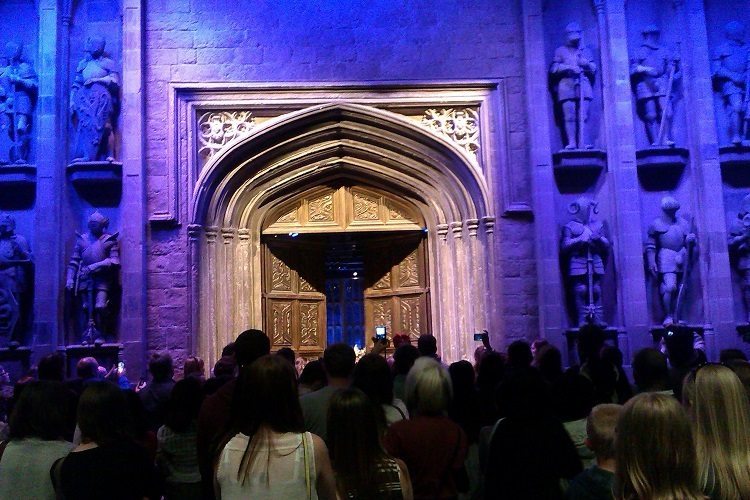 The great hall was magnificent. Obviously it wasn’t as big as it looks in the movies but let me tell you getting up close and personal to the set had my heart fluttering. You could see all of the delicate details of the wall which had the Hogwarts crest and other touches that you just don’t notice when watching the films. I took so many pictures and I hate that I can’t put them all up because you just need to see everything. Like the uniforms of the different houses and the fireplace, basically everything. 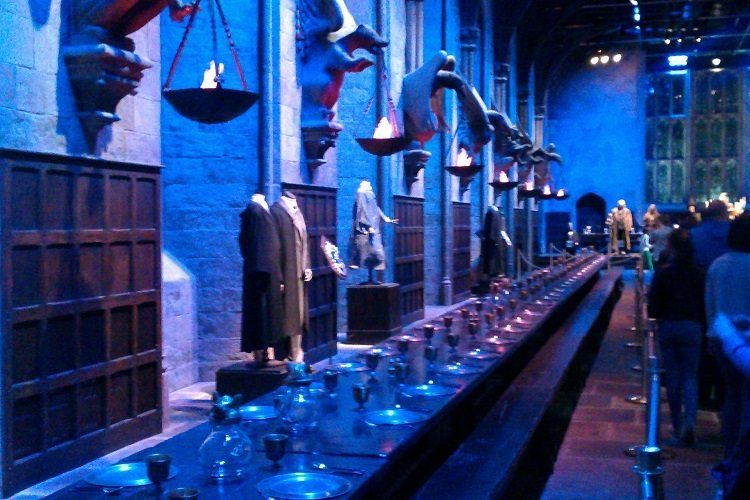 We moved on from the great Hall to the next room. The large space held all sorts of props, like the goblet of fire, the great hall roof which hung above us as we entered (which was much smaller than you’d realised watching the films), and many of the central sets of the films such as the Gryffindor boy’s dormitory, Snape’s potions lab and even Hagrid’s shack. We were allowed to get closer to some of the items in Dumbledore’s office and it was so amazing to look at all the amazing attention to detail with the books, furniture designs and props such as Dumbledore’s pensieve. The amount of times Hannah and I kept saying to each “Look there’s [object]!” and “Oh my god, this is so cool!” and different varieties of high pitched noises of excitement I am surprised I didn’t lose my voice by the end of the trip. Though to be fair there were just as many moments of silent wonder that washed over us as we looked around. 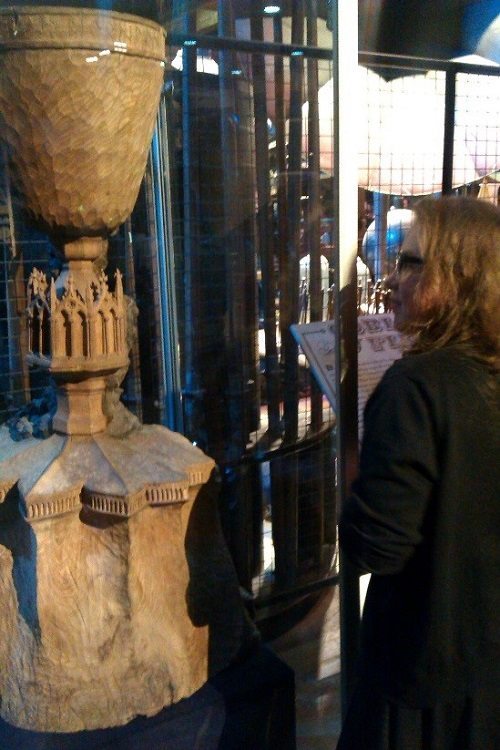 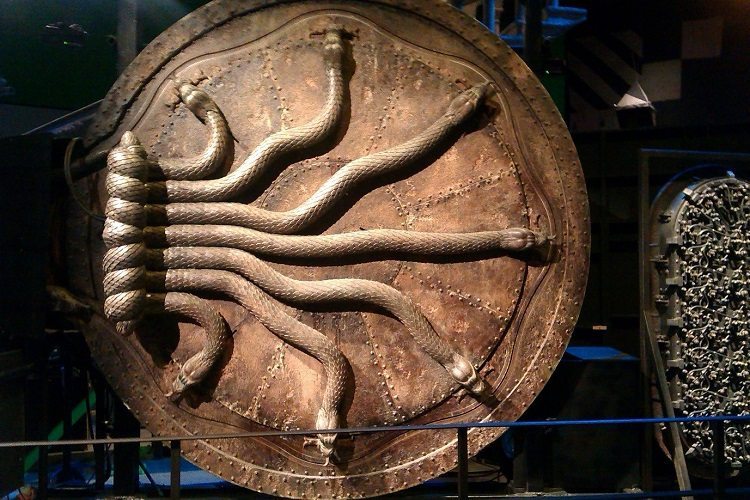 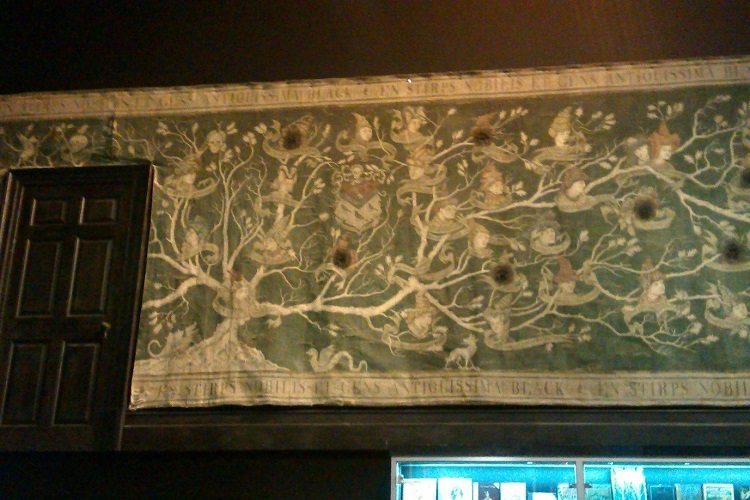 Hannah, who is a complete textile nerd, was completely enthralled by the fashion, especially Hermione’s Yule Ball dress as well as Bellatrix Lestrange’s outfit. Though I’m not going to lie I was really excited by the clothes too, they were absolutely stunning. We were both childishly enjoyed when the props would move either by a push of the button or randomly on their own. For example in Snape’s potion lab the wand would stir in their cauldrons and mysterious substances moved in their jars. 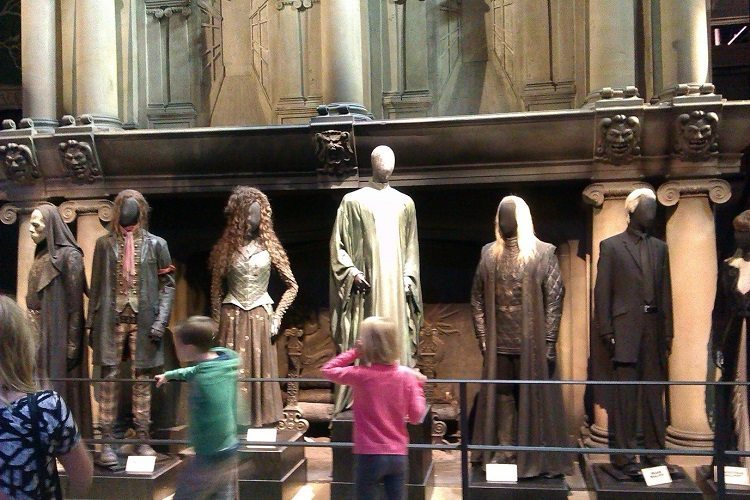 Eventually we dragged ourselves out of the room and court yard where we ate. There was a small stall selling Butterbeer and we just had to buy ourselves some. The drink was so cold but it was lovely and really sweet, especially the foam on top. And where better to enjoy our drinks but by Tom Riddles’ grave. 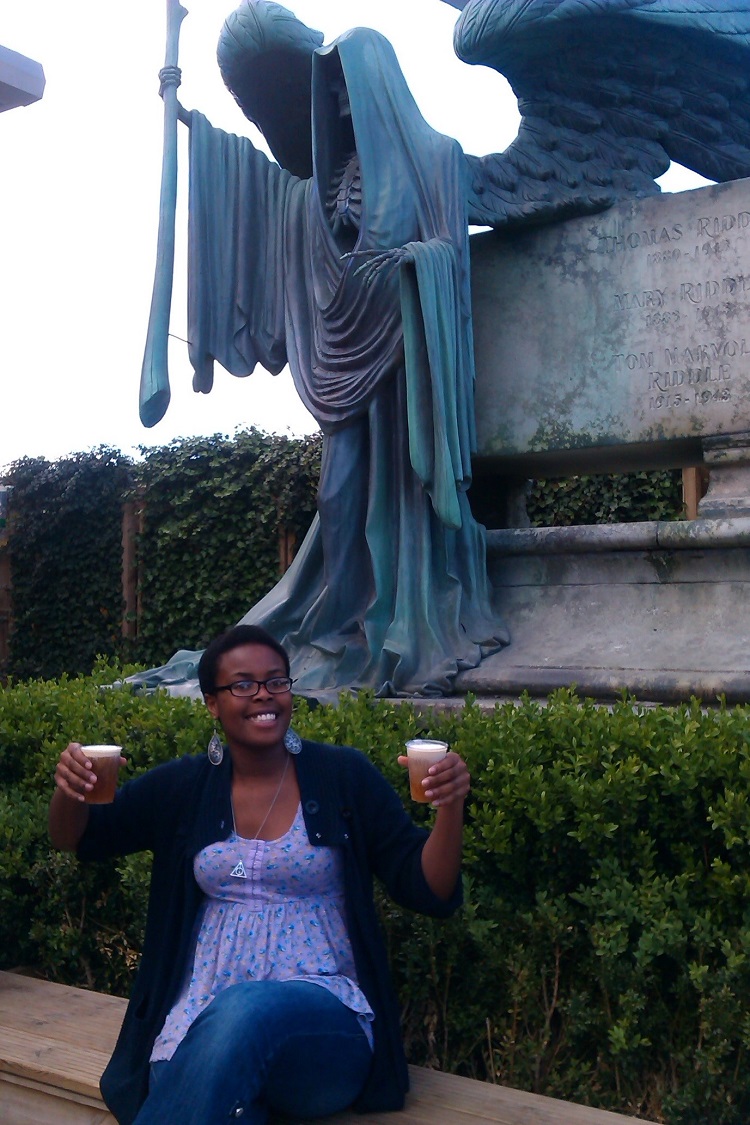 In the court yard there was still so much more to see. There was the night bus, the Weasly’s flying car, Hagrid’s bike, the Hogwarts Bridge and also number 4 Privet Drive. 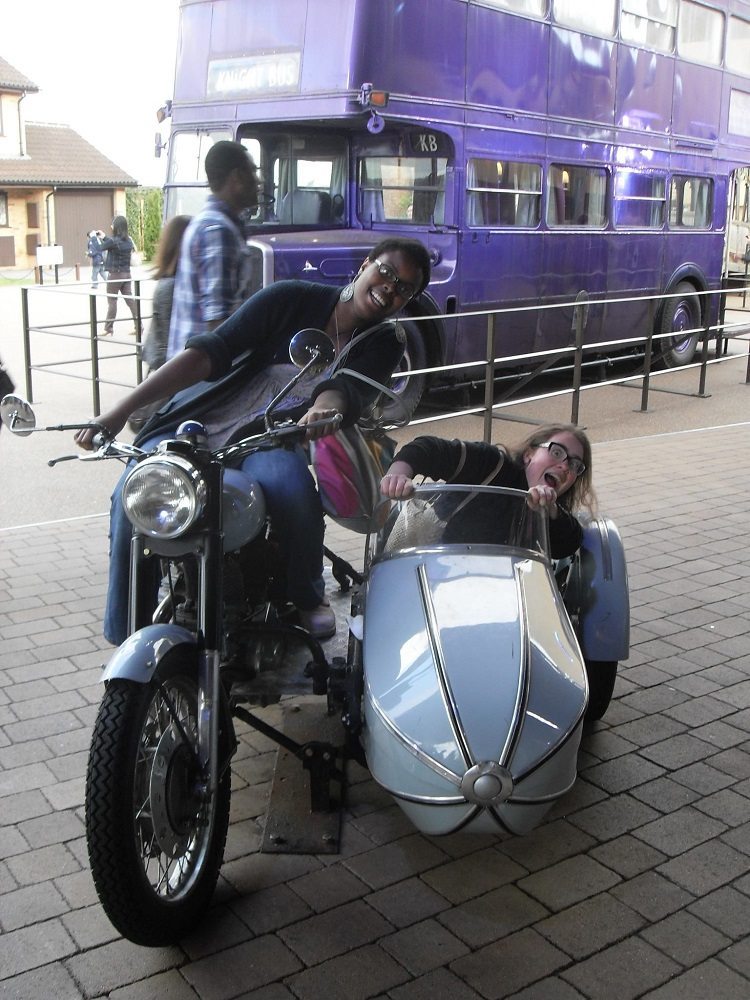 We left the court and entered another building for the rest of the tour. We saw more props but these were mostly masks (such as the goblins’ faces), animals and creatures (such as Aragon), and even that weird Voldermort baby shown in Harry’s dream, which was made all the more creepy because if you pushed a button it made it breath and you could see the chest rising and falling. 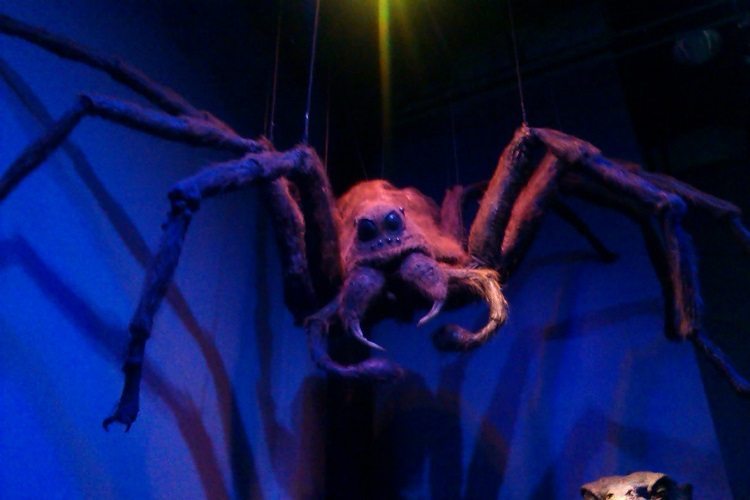 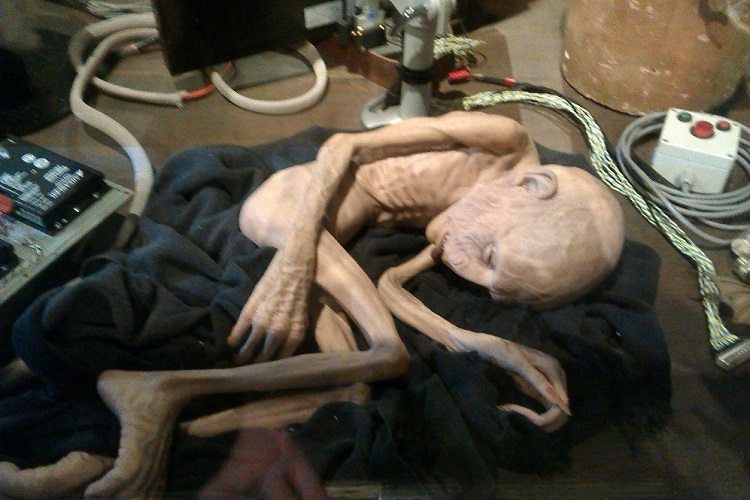 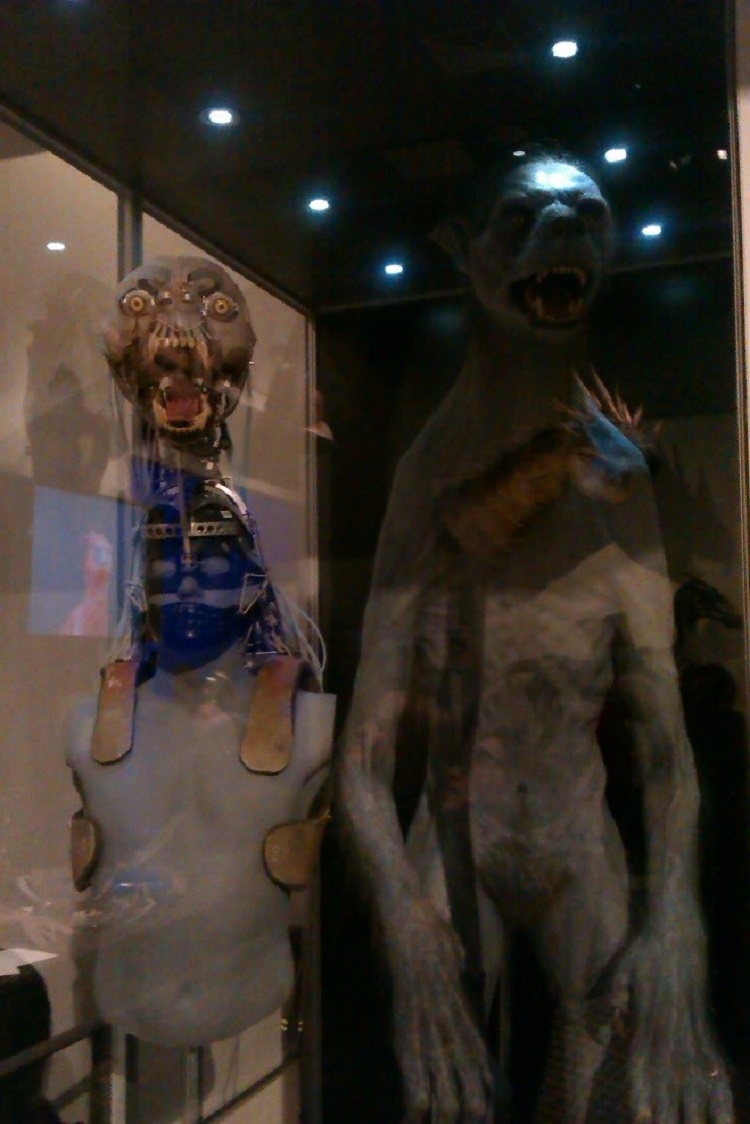 After being thoroughly creeped the two of us moved through and next we reached Diagon Alley. It was the entire set and it wasn’t as large as it is made to appear in the films, obviously, but it is still very impressive. There was Olivander’s wand shop and the Weasly magic shop. The low lighting and coloured lights made the room glow and walking from one end to the other was so special and I am so  upset that I’m not a real witch and it’s not a real place because it was so beautiful, god damn it. 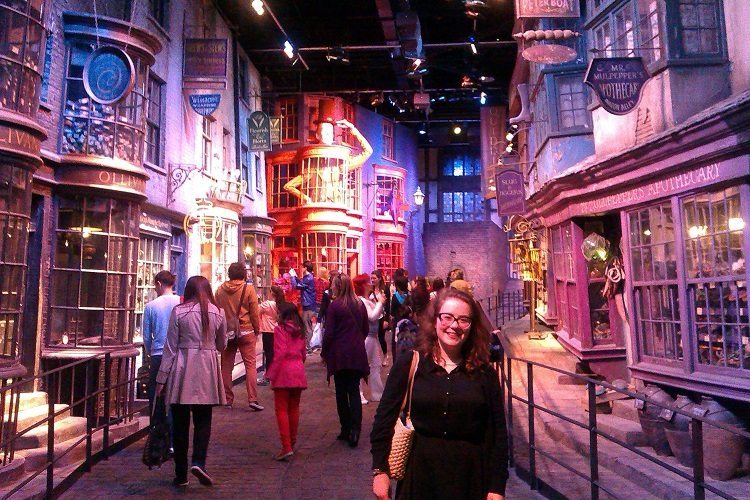 Saying goodbye to Diagon Alley we proceeded to a white walled room and from where there were sketches of designs for various props and sets. This room led to a winding path which displayed the breath-taking concept for the films. They were  just too good to be real. It made me feel inadequate as a human being that other people could create such marvellous pieces of work. I am not even kidding take a look for yourself: 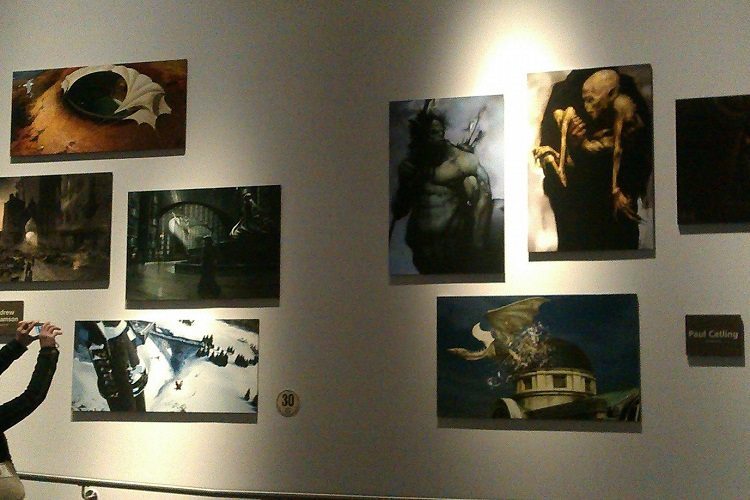 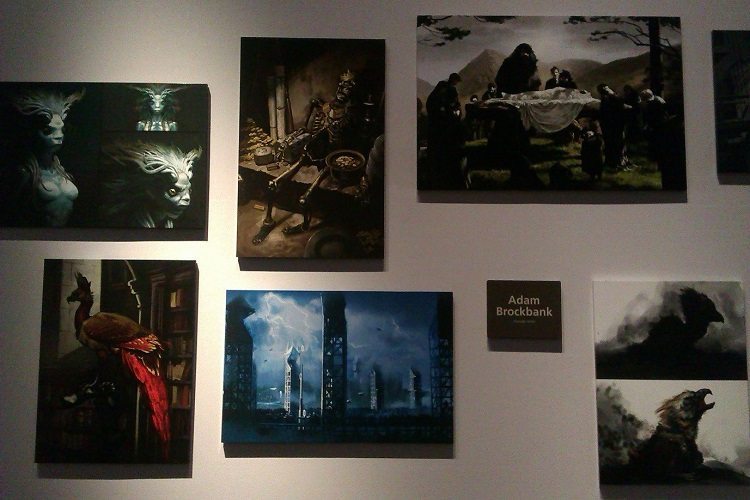 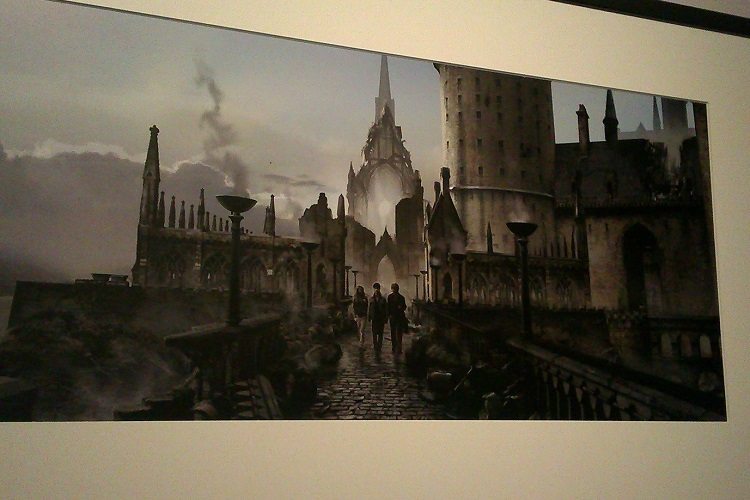 If I had to choose I think this was my favourite part of the entire tour. I wanted to steal all of pictures and just hang them all over my house but unfortunately that wasn’t allowed so all I could do was take as many pictures as possible and try not to cry and their sheer amazingness. The path lead us upwards and the higher we walked the more art you saw on the walls and then there were also paper models on display. We saw a paper model of some of the set including the Hogwarts castle and grounds but that was nothing compared to what was to be the last point to the tour. From the winding trail it opened out to a huge darkly lit room and from below where we stood was the huge model of the Hogwarts castle. 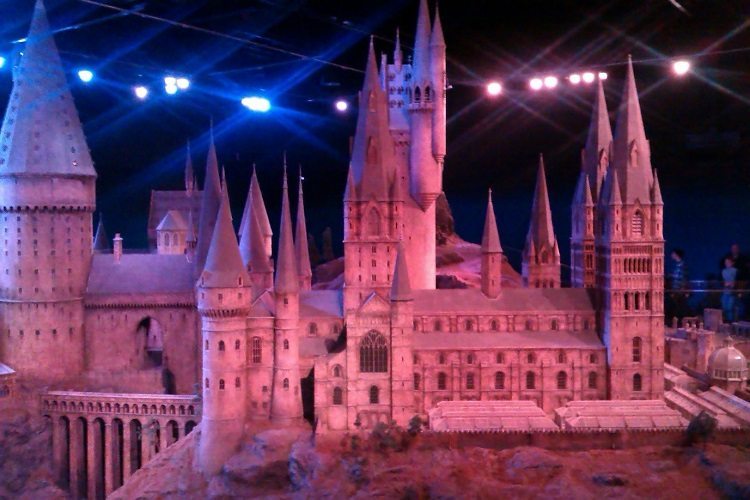 It was huge and so amazing. This was is what they used on the movie when they wanted a whole shot of the castle. It was so detailed right down to the trees on the grounds. There was the whopping willow and Hagrid’s hut and the astronomy tower and the owlery. In the room the lighting would change as if time was passing so it would go from dark to light and pack to dark again and when it was ‘night’ the would lit up. 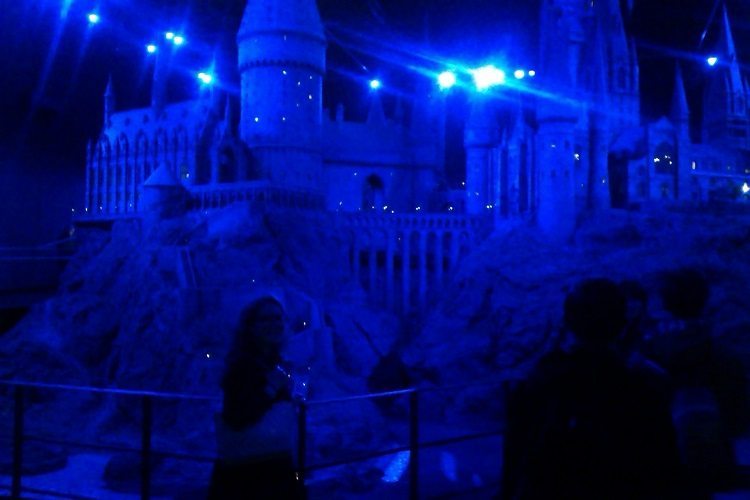 There’s probably so much that I have missed out and I only wish I could add every single picture I took to that day to this article but unfortunately I can’t but if you have any questions about my experience just ask. Also if you’ve also been lucky enough to visit the Harry Potter studio tour I would love to hear about your experience and what you loved the most about it just comment below. 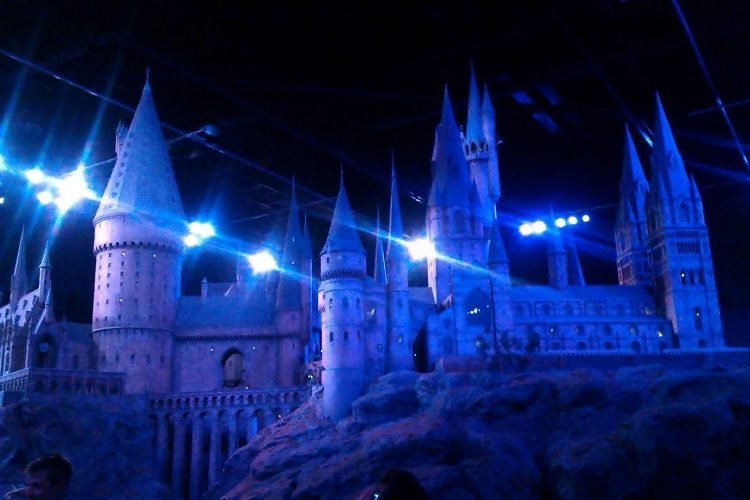