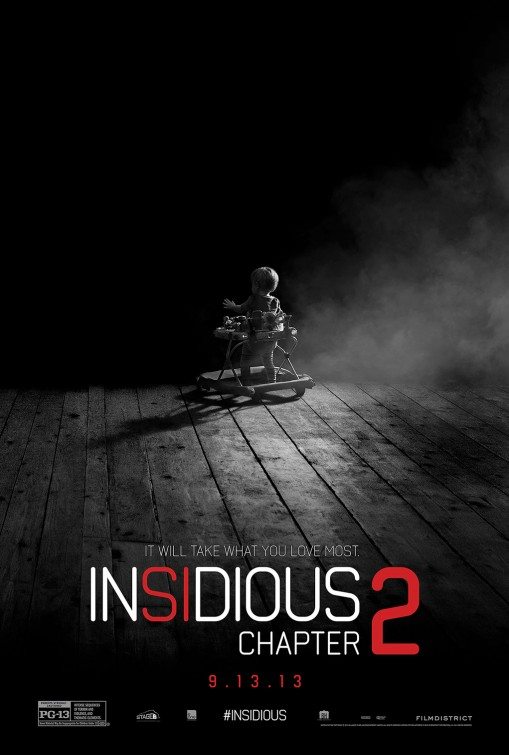 Back when the first Insidious movie came out I have to admit, I thought it was a pretty good film. What I really liked about it was that it was a ‘smart’ horror flim. Insidious had a full developed plot and backstory that brought a new element – inter-dimensional astral projecting – into a genre that generally struggles to offer any sort of new story lines. In a lot of ways, I’m not even sure it was so much a horror film as a paranormal thriller. But that’s a discussion for another day. Or, rather, it’s a discussion for our full review on the first film which you can read here.

Now, if you’re reading this review then you’ve probably – hopefully! – seen the original and you’re more interested in how the sequel measures up. Trust me when I say this is a sequel that lives up to the original and possibly even surpasses it. They bring back the entire cast and jump right back into the story and mix things up in ways you didn’t really see coming.

The main plot of Insidious: Chapter 2 picks up just days after the first movie. It begins with Renai in a police interrogation room being interviewed about Elise’s death which they are calling a homicide and for which Josh is their prime suspect. It makes a lot of sense. I mean, what cop is going to buy the creepy-old-woman-in-the-dress-did-it story? Still, as much as Renai doesn’t want to believe that her husband could have done it there’s clearly something going on with him. Our creepy cliffhanger at the end of Insidious with Josh showing up behind  her doesn’t just go away. It lives on and fuels your own wonder at whether or not Josh really is Josh…

It becomes very apparent early on that whatever it was that haunted Dalton and the rest of the family is not gone. Something is still stalking them as they take refuge in Lorraine’s house – the same house where Josh grew up. We get plenty of very creepy moments as the ghosts continue to terrorize Renai who reacts much like she did in the first film – absolutely terrified, traumatized, and totally realistically. Honestly, throughout this whole series Rose Byrne’s character is the only one responding logically. There are goddamn ghosts everywhere! Scream! Shake! Cover in a fetal position! It’s terrifying.

But the best part of this movie is not the cheap scares.

There are plenty of those, sure. But the real strength of this movie is how it takes everything that you wondered about in Insidious – and plenty of things you probably didn’t – and brings them back to the forefront again. Instead of just trying to scare you more than the first the story in Insidious:  Chapter 2 grows and expands. They go all the way back to the beginning and then work their way through all the clues in the present. Through an early flashback sequence we see Josh back during his own traveling days with a young Elise and her friend Carl trying to help him and his mother which just sets the scene for the rest of the movie’s investigations. Carl, Elise’s two geek boys, and Lorraine go off on their own adventures uncovering a terrible family connection to this shadowy, ghost world – and one individual in particular. Meanwhile Renai is dealing with what’s going on with Josh, the house, and the ghosts; Josh is going through an ordeal we don’t even realize; and Dalton, of course, is trying to deal with his special abilities and everything that’s going on.

As the story progresses, you’ll find some pretty big twists being revealed. You will also find connections to the original movie that you never really saw coming but it’s a fantastic sense of continuity. There were a lot of things in the first movie that didn’t get answered and things that happened that were written off as just being the result of some crazy ghost shenanigans. But you learn in this movie that there was so much more behind all of it. They take the opportunity in this movie to explore a lot more about the ghosts, their interactions with our world, and the inner workings of the Further – the ghostly realm where Dalton and Josh find they can project their consciousnesses. You move around al ot in this movie with new settings and new information coming constantly as opposed to just moving from a few houses that Renai thinks are haunted in the first film. It makes the movie feel bigger and the story a bit more intricate.

Really, I just enjoyed this movie a lot. The cast is flawless once again and I was glad to see everyone back in some way. Sure, sometimes the movie tries a little hard to force some comedic relief but even then I never really mind it too much. They always win me back with some new surprise, another little plot twist, and the raw family emotion that comes from setting a young family at the forefront of all this craziness. Insidious really knows how to get to me on a horror movie level.

I will say this, though. You cannot watch this movie without seeing the original. It is not a stand alone film by any stretch and to appreciate all the nods to the original you really out to have seen it recently. I don’t know if I would have enjoyed it as much as I did if I hadn’t re-watched Insidious the night before seeing Insidious: Chapter 2.  You will miss out on so much if you just try and watch this one. But, considering today is Friday the 13th and the movie opens today, it’s the perfect time to watch the first movie! Grab some friends, track down the original at Walmart or something, and start your horror movie fest with Insidious before driving over to catch Insidious: Chapter 2.

Lastly, will there be an Insidious: Chapter 3? Maybe. The film leaves the possibility open but it also provides some much needed closure for the Lambert family and wraps up the story pretty nicely. If it ends here I think we’ll be good.

Final Thoughts:
Insidious: Chapter 2 is a surprisingly well done and well thought out horror sequel that doesn’t just try to one up the original. Instead it expands on the original in ways you never would have expected. That’s what makes it great. It’s not just some run of the mill ghost story of slasher flick that’s just looking for a bigger body count and a few extra scares. They take what they had in the first movie and bring it all to the table again. The fact that they brought back the entire cast and only introduced one new key player was a nice added polish to the whole movie. But, while I do recommend seeing this movie, I cannot stress enough that you really need to watch the first one before you go see the second.