An Open Letter to Netflix RE: Subtitles

I love your service. I love Netflix. I really do. I’ve been paying for the service now for three or four years and I use it pretty regularly.  And while some people have a lot of complaints about the service, mine have been relatively few and far between.

Besides that one time they took down Adam-12 for a good year or so right after I moved back to the States from Ireland and their failure to renew a few contracts, I can’t really remember a time that I was actually upset with Netflix about anything. And even then I’ve never considered cancelling my subscription.

To be fair, I’m not considering cancelling my subscription now either.

But I am a little upset.

As someone who is half deaf, I sometimes rely on subtitles when watching shows and movies. The television in my bedroom always has them on no matter what I’m doing – watching TV, streaming Netflix, playing video games. It just helps me keep track of what’s going on.

When I’m listening to a show in the background I’m okay with missing a few words or lines of dialogue here and there. That’s my fault. I’m not paying attention. But when I really sit down to watch something, I do pay attention to the subtitles. Even if I don’t need them for that particular show or movie, it’s just sort of instinctual.

Most of the time the closed captioning is pretty spot on. Networks are pretty good about it and video games, too, transcribe word for word in-house because they know the dialogue. And while your service offers subtitles on an increasing amount of content – and you plan to offer it on all of that programming by 2014 – that doesn’t mean that the subtitles are offering the same experience.

And that I have a problem with.

I first became aware of issues with you subtitle offerings a few months ago when, in a fit of Kevin Bacon appreciation, I decided to watch the original Footloose. At first I wasn’t really paying all that much attention to the subtitles or the film itself, I just had it playing in the background while I worked on something for my internship. But when I started to watch the movie in earnest I realized something. The dialogue was not matching up to the subtitles.

Or, rather, the subtitles were not matching up to the dialogue that was being spoken. 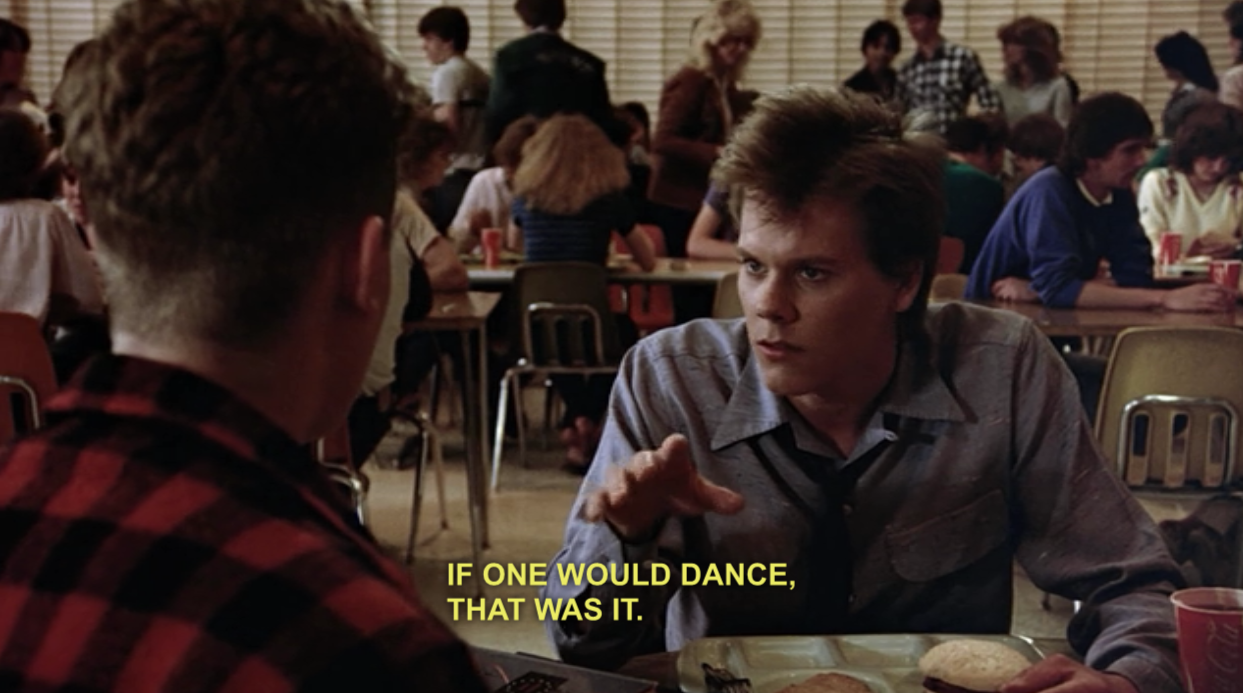 Frequently I would notice that a lot of the lines, when transcribed into subtitles, had been shortened or rewritten so that the grammar was different, the words more straight to the point, etc.

Like, if someone is telling you something but trying to edge around the topic before getting to the point that generally means something. But when the subtitles just bluntly say what is being said in a more direct manner that indirectness is lost.

I contacted you via your customer service option – I think it was on the Netflix Facebook page but I am honestly not sure now – about it, but the guy who responded seemed to think that the subtitles were just being cut short. I tried explaining to him that, no, they were just being condensed or changed around but it didn’t seem to get across.

I’ve noticed similar things happening now and again in other shows and movies, too. For whatever reason, though, Footloose is by far the worst. Some shows do it now and then, which is fine. Usually it doesn’t take away from the story, context, or tone. Having the dialogue shortened or changed around once or twice doesn’t ruin a movie or a show. It’s fine. With Footloose, though, the whole movie was plagued with numerous changes.

What’s equally distracting is what’s going on with the subtitles in Breaking Bad.

The issues with the subtitles in that show were probably even more annoying. Not because they were shortening or changing the dialogue, but because I wasn’t actually getting to read the full dialogue.

Breaking Bad is a gritty, violent show. It’s about making and dealing meth! There are drugs being made, sold, and people getting killed left and right. I mean, at one point there’s a guy’s head mounted to a tortoise shell that then explodes and sends limbs flying. There’s some crazy stuff going on. People curse like crazy. It’s just part of the show. It’s what happens.

So why don’t the subtitles in this show let me actually see what’s being said?

The language is the least of this show’s problems or the viewer’s problems.

Except Netflix, apparently, feels like people who rely on subtitles ought to be spared that foul language. For some reason, the show is censored. The entirety of Season One (that’s as far as I’ve gotten by the time I’m writing this) has been censored.

All of the episodes were censored. Any time someone says anything even remotely objectionable the subtitles will place a “—-” instead of the word. With this show that basically means that there are occasionally lines of dialogue that are reduced to a series of lines.

And they are way too overzealous in their censorship, too. I mean, they cut out ‘balls’ at one point. Balls! Like that’s really on par with shit, damn, crap, etc.

But if someone says “Kill that motherfucker!” then shouldn’t everyone be able to have the same shocked reaction to the word ‘motherfucker’ as anyone else? Why should people using subtitles be spared? Alternatively, why should they be deprived? I’m watching this show because I know people are going to be doing crazy, illegal things. I mean, that’s not why I’m watching it. But I know it’s going to happen and I am okay with that.

I’m just as fine with someone shouting the f-word at someone else or dropping f-bombs left and right. If I weren’t, I wouldn’t be watching this show. If you want to offer censored subtitles then fine. Do it. But make it optional. Some of us want our gritty television to stay gritty.

I’m glad that you have made as much progress in providing subtitles as you have in the past few years, Netflix. Your commitment to making them available for your entire catalog by next year is really great.

But, Netflix, c’mon. Either you are dropping the ball here or you’re just doing things half-assed and I expect more from you! You’re awesome. I know you’re awesome. So show it!

Has anyone else noticed any issues with Netflix’s subtitles that go beyond just regular technical errors? Let us know in the comments!

138 thoughts on “An Open Letter to Netflix RE: Subtitles”