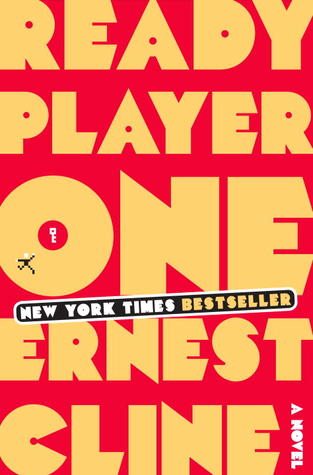 Before I begin this review I should probably be honest. This is one of my favorite books of all time. There are very few books that I will say that about and I will admit that no matter what I write here I cannot fully express just how awesome it is. So I won’t really try. I’m going to write this as honestly as possible and hopefully you will read it and enjoy it as much as I did.

Ready Player One is a book about me and like me. Though it’s about people like me faced with a much different world than the one we live in now.

The United States in 2044 is not a place you want to be. Granted, the world as a whole really isn’t any place you really want to be. That’s why so many people find themselves escaping into the virtual world that is the OASIS. It’s a lot like Second Life or Playstation Home except that it’s a completely three dimensional, immersible virtual world. You can shop there, play games there, build your own little secret hideaways… You can build your avatar into anything you want and you can explore tens of thousands of worlds all ready for you to explore. Every movie, television show, book, and fantastical world has a planet made after it and anyone can visit them – provided they have the money.

Wade Watts has a pretty shitty home life and he spends the vast majority of his waking hours hooked up to OASIS. He even goes to school with virtual classmates from all over the country who know him only by his online moniker – Parzival. In his free time Wade – like many  other tens of thousands of people in OASIS – searches for the ultimate video game easter eggs. Jim Halliday, the man who invented OASIS, died prematurely and without much in the way of family. He instead hid three keys within the game that will open three gates. The player who finds the keys and the gates and completes the challenges associated with each will then inherit his vast fortune and media empire which has, so far, been laying dormant waiting for someone to claim it.

Aided in his efforts isWade’s best friend Aech (pronounced like the letter H). Wade has nothing, Aech seems to have a fair amount of credits to throw his way now and again. They have never met and neither knows the other’s real name or face. But they come to realize just how much they trust one another. So much so that they put their lives on the line for one another and for others – art3mis and two brothers from Japan – who begin to round out their little group of “egg hunters.” The problem is that while they might have started to figure out Halliday’s puzzles so have others. And now they are all being hunted down by a corrupt, maniacal who want to take over OASIS for themselves. They want to win so bad they’ll even kill for it.

This is where we find our poor, overweight, and chronically downtrodden hero, Wade. And he more than rises to the challenge.

So does author Ernest Cline.

I have never before been so taken by a book. At least not since the first time I read Ender’s Game. Ready Player One absolutely nails it. Everything you need to know about online and gamer culture is there there. The relationships are absolutely perfect and they are so deep. In a world where we can make connections with people we will never meet and we may never know by their real names, Cline really embraces the fact that those relationships are still very real. You can make friendships. You can even fall in love with someone without ever meeting them. Wade and art3mis have such a touching, heartbreaking relationship at times. And Wade and Aech are two of the best bros you’ll ever meet. But you’re left to wonder what will really happen when they do meet for real? Their first encounters are quite shocking – even to the reader.

And Ready Player One is very much a love letter to the 80s and it’s pop culture. Despite the fact that the book stakes place so far into the future, it constantly plays homage to the science fiction and video games of the 80s. Every one of Halliday’s little challenges ties into that same source material that spurred on his own imagination and ultimately led him to create OASIS. For him it was never just about the graphics and the people. I loved how you really got to know Halliday – even though he had been dead since before Wade was born – through his challenges and the little things Wade and the others had learned about him to help them in their quest to find the keys and open the gates.

I was just glad that I grew up on a watching a whole lot of WarGames on TV and watching my dad play classic arcade games on modern day home consoles or I might not have caught as many of the pop culture references as I did!

You might think that this book would be boring. Who wants to read about people sitting behind computer screens, right? But it’s so much more than that. There is action – real and virtual. Halliday’s in-game challenges are written to be just as exciting and nerve wracking as the real-life adventures Wade is forced to go on in order to keep himself safe and playing. There really is no time during this book where you will be bored. The story is always moving forward and pushing Wade further and further towards his goals. That isn’t to say, though, that there aren’t some hitches. And that those hitches might throw him for a loop and force Wade to change his game plan. Or even change himself.

I really cannot recommend this book enough and I know I cannot do it justice in a review. Hopefully you’ll give it a chance and pick it up for yourself. If you’re an old school gamer or even a new school gamer, you’ll appreciate the way gamers and the culture is portrayed. And hopefully you’ll pick up on the magnitude of little easter eggs left not by Halliday but by Cline.