Cinderella is a Cyborg 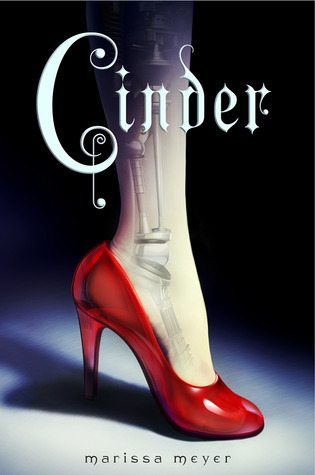 At least, she is in the fairytale inspired novel Cinder by Marissa Meyer.

When I picked up this book I figured it was going to be your usual fairy tale adaptation. They are pretty common these days. Once Upon A Time on ABC does it with a campy, family friendly flare that’s really gotten the ball rolling on these sorts of stories. And another good example would be Alex Flinn’s Beastly which was made into a film and the other numerous adaptations of other classic tales he has written over the years.

But Cinder is much more than just a Cinderella story. In fact, I’d say it’s probably more like Tangled or Anastasia if anything. I almost regret that it’s been marketed as a Cinderella story the way it has been at all because its very much separate from the classic tale and it holds it’s own without the need to associate with the original story or classic Disney movie. The classic formula is thrown out in favor of a very refreshingly original story.

Cinder is about a teenage, cyborg named – you guessed it – Cinder who lives and works in New Beijing. She lives with her ‘evil’ step-mother and her two step-sisters Pearl and Peony. She isn’t necessarily mistreated in the way we would think of Cinderella. As the family’s primary source of income she spends her days in the market working as a mechanic and despite her youth and her second-class citizen status (cyborgs are regarded as half-human and treated as science experiments) she is regarded as the best mechanic in the city. Granted, she doesn’t get to keep any of the money she makes and her step-mother does force her to wear a ridiculously undersized cyborg foot that she’s had since she was eleven. Which is actually as long as she can remember. Cinder was injured in a hover car accident – or so she was told. She was adopted into the family but her adoption did not go smoothly. Immediately after the paperwork was finalized her adoptive father died. He – like many hundreds of thousands of others throughout the world – fell victim to a plague that has been wiping out towns and entering into the urban populations and got sick while in Europe adopting her. That’s sort of why her stepmother hates her.

Fortunately, she has some friends. First there is Iko, the family’s personal android whose faulty personality chip has her gushing over hot guys – like Prince Kai – and dreaming of being a human and enjoying pretty dresses, dancing, and more. And then there is her stepsister Peony who is almost as tired of her mother as Cinder is sometimes and who has always been so kindhearted and approachable that Cinder really does consider her a sister. Her life – though not ideal – is pretty normal all things considered. She yearns for freedom and eventually she will have it. She merely has to wait eagerly until she’s old enough to be out of her stepmother’s control for good.

Except fate – and Prince Kai – have other plans.

Prince Kai is a very goodhearted young man who was raised well by his parents. Unfortunately, he is also a young man who is burdened with some very grave responsibilities. He is very much aware of the precarious position his country and the whole world is in with the Lunars looming above them. A psychic, totalitarian race of former humans, the power hungry queen is looking for a way to assert her control over the humans below. Kai’s only hope has been searching out the queen’s niece who is the rightful heir to the throne on Luna and who is rumored to be alive on Earth even though she supposedly died many years before. Unfortunately, the android helping him in his endeavor broke down with vital secrets hidden away in her memory. And so the two cross paths. Cinder – who is shocked and awed – and Prince Kai who is equally surprised that the most well renown mechanic in the city is a girl his own age.

It’s a cute little meeting and that should be all it is – a quick fix and a story to tell her stepsister. But again. Things just get worse. The king catches the plague and becomes ill. So does Peony. And Cinder’s is forced to shoulder the blame for Peony getting sick, too. Oh, and yes. There is a ball. A ball open to all citizens that goes from a happy event that the characters can look forward to or dread to a cataclysmic evening that may decide the ultimate fate of not just Cinder but Prince Kai, the entire country, and possibly the whole world.

Because it turns out that Cinder is far more than just an orphaned cyborg mechanic. Much more.

I’ve read back over this summary and I admit. It sounds cheesy. But it’s so not cheesy. Not that cheesy anyway. Cinder is a very likable character. She’s practical and had a good head on her shoulders. The way she’s been patched back together with mechanical parts adds a very unique aspect to her character. She has an internal computer system in her brain that helps her think, remember, and moderate her body. Her prosthesis are a sense of shame in some regards – she’s a cyborg and she’s kind of falling for the prince! Which is, of course, unthinkable.

Prince Kai is a very well meaning young man and he seems like a naive future ruler at times. They switch third person narrative to his point of view now and again which is okay. I don’t really think it adds that much to the story. It doesn’t necessarily distract from it – and it’s nice to get the back story and the political aspects in there. But sometimes it breaks up part of Cinder’s story that I wish would have just continued.

There were really only a couple things that I didn’t like. One thing was entirely my own fault. Reading through the story I couldn’t help but flashback to constitutional law and over analyze the whole ‘cyborgs as an unprotected class’ thing. But I won’t bore you with the details of my internal debate. Basically, if it were set in the modern US I wouldn’t understand how people could get by with denying them rights. (I had the same problem with Amped.)

No, the real problem I had was actually Cinder and Prince Kai’s budding relationship. Don’t get me wrong. I love them as a couple and I thought it was adorable. My problem, though, was that while they were kind of falling for each other both of them had a family member who was dying of a terrible plague. Kai was literally watching his father die in a bed in a quarantine in the palace. And Peony is off in an off-site quarantine outside the city and already written off as dead because no one survives the plague. No one. So I just feel like it’s a bit awkward that these characters are losing people they care about – because no one survives – and yet they are growing increasingly obsessed with one another.

I don’t know, that just sort of bothered me a little.

But the story as a whole? Fantastic. I would definitely recommend it. So much happens and Marissa Meyer keeps you wondering and just throws you for a loop at times. There aren’t a whole lot of books that I get into as much as I did this one. There were times when I jut couldn’t believe the actions of some of the characters and times when I was just frustrated (in a good way) with how things just seemed to devolve and get worse for poor Cinder. The only other thing I really need to say is that if you’re not a fan of cliffhangers you’ll want to make sure to have the sequel, Scarlet, on hand. Because while the end of Cinder is phenomenal it’s also extremely frustrating. Like, extremely. I can’t even believe how much I wanted to know where the story went next. So, watch for a Scarlet review just as soon as I acquire a copy.