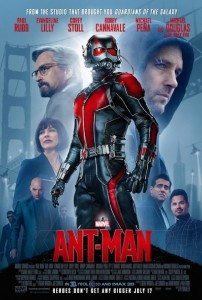 Ant-Man tells the story of Scott Lang, an ex-con who just finished doing time for stealing from the rich and giving back to the poor. Scott has a complicated relationship with his ex-wife and her new cop boyfriend, neither of whom want to give him visitation rights to see his daughter. Well, at least not until Scott has an apartment and a job.

So, after getting fired from his job at Baskin Robbins for lying about his past (Baskin Robbins always finds out), Scott decides to pull one last job with his friends to get back on his feet.

The gang end up robbing a safe and stealing a red suit- which happens to contain a serum which allows Scott to shrink down to the size of an ant while maintaining his density (which is coincidentally part of an answer to a Google interview question involving a blender). This means that he is effectively a human spy/weapon in the suit.

Enter Dr. Hank Pym, the suit’s creator. And his evil mentee, Darren Cross. Cross has been trying to recreate Pym’s serum to sell to Hydra as a weapon. Pym isn’t having it.

Dr. Pym and his daughter, Hope, train Scott to infiltrate Cross’ lab and steal his serum and suit before they fall into the wrong hands.

Ant-Man is worth the buzz if only because it manages to pull off such a strange superhero concept without sacrificing narrative quality. The visuals when Scott was ant-sized were spectacular, and the hero’s interaction with the ants was surprisingly action-packed. The movie managed to keep the stakes high and the adrenaline pumping even when the scale was small (literally.)

However, this movie isn’t Marvel’s best work by any means. For a relatively off-brand hero, the writing’s humor didn’t quite justify the concept like it did in Guardians. The movie was still funny, but it wasn’t as laugh-out-loud funny as other MCU movies, and the action aspect far outweighed the humor when the scales should have been tipped a bit more evenly.

All the actors’ performances, however, were fantastic. Rudd especially was equally compelling as a man with uncompromising morals struggling to see his daughter and as an over-excitable superhero-in-training.

This movie isn’t going to be passing the Bechdel test anytime soon, though. Or do any favors for feminism. Hope’s character is the same ‘frigid’ stereotype we saw in Jurassic World, and her stoic antipathy falls neatly into the stereotype of the non-motherly, ‘bitch’ businesswoman.

Also, someone somewhere in hair and wardrobe is kicking themselves that they styled Lilly with the same harsh bob haircut as apparently every other female lead this summer.

Final Thoughts: I’ve gotten a little sick of Marvel’s superhero movies, so I wasn’t really ant-icipating being blown away by the film, but I was pleasantly surprised by how well Marvel translated this oddball concept to screen without sacrificing character development or poignancy for visual gimmicks. Ant-Man is worth watching for Marvel’s usual blend of humor and action- but don’t expect to be blown away by either aspect. Don’t forget to stick around for the very end of the credits for an extra cut-scene teasing the next Captain America film!