Negative Space #1 is Kind of the Greatest Thing Ever 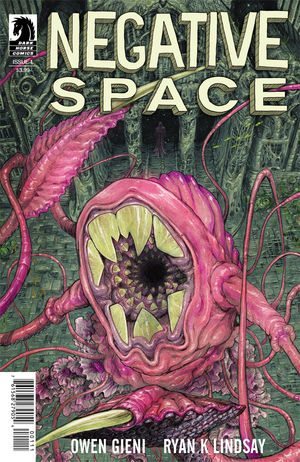 I’m not entirely sure what’s going on in this first issue of Negative Space.

Do any of you remember the first time you watched Cabin in the Woods without any idea about what was coming next? That’s basically what it’s like reading Negative Space. In fact, the two stories probably have quite a bit in common plot-wise. That’s my take on this new series, though, and I’m really, really excited about that.

We start out with two separate perspectives. We’ve got Guy, a writer with writers block struggling to write his own suicide note. Then we’ve got the folks at the Kindred Tower led by Rick who are watching, eagerly and awaiting his inevitable suicide. Yeah, these guys want him to commit suicide. No, they don’t just want him to commit suicide – they seem to need him to and they go out of their way to do everything they can to make him more and more depressed as the night progresses so they can ensure he dies.

But a few kind words from Woody the food truck guy encourage him to keep going. This is kind of funny because it turns out Woody actually works for the folks who want Guy to die. We find that out at the end… and end up asking a whole lot more questions than we were before. Like: what the hell is that evil squid thing they are just dissecting in some random suburban house!?

What is going on?

It seems like this evil corporation or whatever is trying to harvest the emotions and feelings of people to appease the Evorah, who will otherwise “rise up and kill us.” I love it. I seriously love it. I’m telling you guys – it’s very Cabin in the Woods. In a good way!

The artwork, too, is just perfect. It’s very put together and it’s by the same guy that does Manifest Destiny so you know I’m loving it. I can’t wait to see more of the Evorah because Owen Gieni does horror and monsters spectacularly.

I might have my new favorite Dark Horse series here, people. It’s that good.