Wicomicon’s Heroes Don’t Need Capes To Save The Day

WICOMICON was everything you could ever want in a convention: cosplay, vendors, and panels. The crowds only grew throughout the day and there was a sense of joy and community that I hadn’t felt at any other convention.

Wicomicon, the one-day pop-up that was organized in the span of the week, was about to commence, and no one knew what would happen. Would it be a rousing success or empty? Would the vendors make a profit or go home broke? There was one way to find out and that was to put on the show

Well, good news! Fans and vendors alike packed the room when I walked in at 11 am. The crowds only grew throughout the day. There was a sense of joy and community that I hadn’t felt at any other convention. Maybe it was that everyone felt connected by the collapse of Universal FanCon. Despite the odds, fans got the con they were promised. Though maybe not from the source they were expecting.

There was everything you could ever want in a convention: cosplay, vendors, and panels. Who puts together panels with only a week of notice? These folks do. SyFy had some major buzz going with Sean Baek and Tamsen McDonough repping for the Killjoys and The Magicians‘ Jade Tailor, Sergio Osuna, Rizwan Manji, and Hannah Levien.

Wicomicon Exec, Keith Chow, talked with Marvel Comic writer Greg Pak about growing up in Texas for a live episode of Hard NOC Media‘s Southern Fried Asian. The Turning Moments into Movements: The Importance of Diversity in Media in Entertainment panel was particularly popular. Probably because it featured Cheo Hodari Coker (showrunner for Luke Cage), April Reign (creator of #OscarsSoWhite; Akurael), and Angelique Roche (host of the podcast Marvel’s Voices).

I spoke with a variety of people: vendors, panelists, and attendees alike. A few mentioned they hadn’t gotten their ticket refunds back from Universal FanCon, and a few said they’d come in from out-of-state, several gushed about how happy they were to be at Wicomicon. And almost everyone I spoke to mentioned two things: how amazed they were that this con got off the ground, and how the sense of community pervaded this con.

And isn’t that what it was all about to begin with? Universal FanCon touted itself as the con for all people. The con for the women, POC, disabled, and queer nerds. The con where the communities were meant to intersect and all marvel over the joy of seeing a tiny black Wonder Woman, a female Killmonger, and a Rose Tico cosplay. When Universal FanCon fell apart, the movers and shakers of these communities, like real-life superheroes, decided to #SaveTheDay. As the saying goes, not all heroes wear capes.

So how is your con going?

It’s been amazing! Yeah. I mean I was thrilled to be able to come down. When I found out this was happening, I was like, “Keith, should I come down? I wanna come down.” He was like, “Come down!” So here I am.

And the vibe has been tremendous. I mean people came in, they were happy, they were ready to, you know, to enjoy themselves. And it’s been a kick! I mean, it’s been intense too, because it’s one day, and it’s not just an artist alley, but there’s also panels. I mean, that’s tremendous the fact that these folks actually organized panels and they have some performances and stuff. It’s a one-day pop-up, but it’s actually a full con at the same time. It’s insane. I mean, it’s insane! It’s been a blast and I’m having a great time.

It’s really great. I’m just so impressed with what’s been put together in such a short time. I mean, talk about community… Once they had space, I think everybody kept pouring in like, “Hey we want to participate!” …I really believed in the cause of the community. I think we still need a con that caters to that and put together by more people who are competent and capable of something like that.

I mean, the Universal FanCon thing, I feel like it was really disappointing. I think probably the most frustrating part of it was like not only the lack of official statement. Because I looked at their website and was like, “What the fuck is going on with this?”

I had no idea, and then I finally read… the [Women Write About Comics] article where they very thoroughly comb the information and find out what happened. And I was like, wow, it doesn’t seem like it was malicious, but it seemed like it had some people, the founders, [who] really didn’t know what they were doing. And instead of spending the money to find competent help, they just kind of accepted unverified quality help. Which I think opened up the door for people with not-so-great intent.

But this whole thing happening today has been absolutely incredible. The fact that it was organized in a week. This is blowing my mind. And we have all these great people here. I’m so happy to be here, and so happy to be tabling. Because I was so pumped for Universal FanCon and it didn’t happen. But we’re having this anyway. And it’s been so great, and the sense of community from the attendees and all the other guests. The energy in here is amazing. I think it’s just great.

So my con’s going really well! I’m loving the community that has come together for this pop-up. And everybody who’s put it together has… superhero, possibly mutant, powers to put together all of this, coz, damn. Amazing, the energy has been fantastic. Everybody has been just super, super great. So I’m really happy to be here.

A few words from a few of the founders.

Keith Chow, the founder of The Nerds of Color:

It’s hard to believe that eight days ago, “WICOMICON” was barely an idea. On Saturday not only had the idea become a reality, it showed the world that fans from marginalized communities are hungry for spaces where they can celebrate what they love.

Immediately after I got the news that the FanCon was being postponed, I jumped on the horn to tell my partners who I had a booth with (and was also doing a Black Heroes Matter panel) that it was postponed. Andre made an offhand comment, like, “Is there anything we can do to fill the void,” kind of joking. But it got all of our wheels spinning. And I put out the word on Twitter, you know, “Is there anything that we can do in 7 days to fill the void?”

And you know, I mean, the response was ridiculous, amazing, inspiring, and it let us know that it was really a possibility, something that could be done. So each of us went back to our respective holes. We pulled in Keith Chow, who’s a dynamic creator of The Nerds of Color. And we just went through our networks and pulled in people with skill sets who could help us bring this thing to life.

In seven days we were able to, you know through duct tape and string, piece this thing together. And it’s been amazing. The community has really come out and turned this into something we could never imagine. 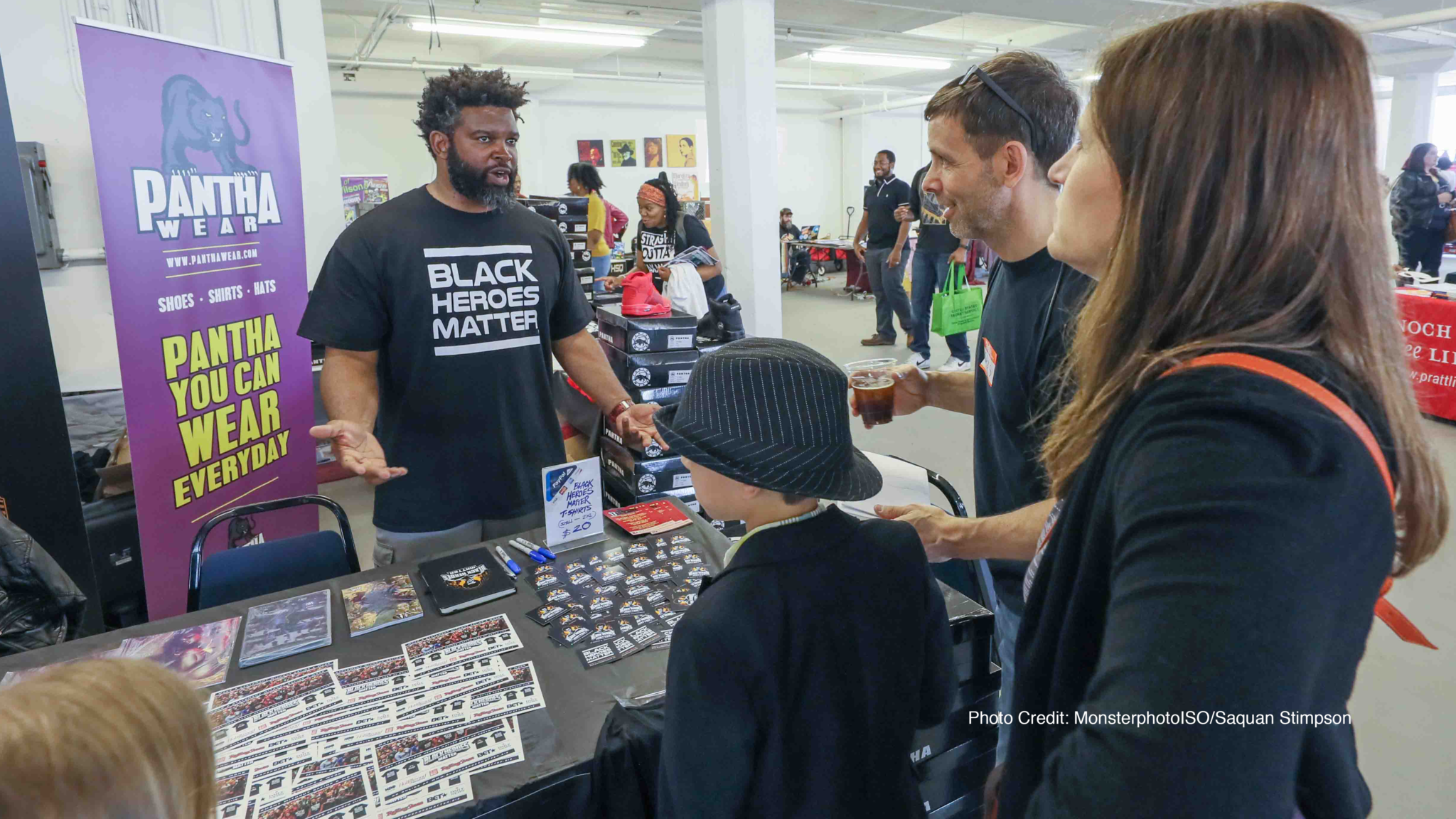 Follow this thread to see all the vendors, and check out the Virtual Artist Alley. And when you get the chance, send your thoughts, your love, and support to the founders of Wicomicon: Karama Horne (The Blerd Girl), Keith Chow (The Nerds Of Color), Patrick Strange (New Release Wednesday), Uraeus (Black Heroes Matter), and Andre Robinson (Carbon-Fibre Media).

Will there be a next year? Let’s hope so. Until then, #ConTogether