Fanfaire NYC 2018: Taking a Trip through the Dungeon of Doom by Dwarven Forge

In a black box theatre tucked in the basement of the High School of Art and Design, something magical happened. Attendees of Fanfaire 2018 had the chance to test their skills out in Dwarven Forge’s Dungeon of Doom.

In a black box theatre tucked in the basement of the High School of Art and Design, something magical happened. Attendees of Fanfaire 2018 had the chance to test their skills out in Dwarven Forge‘s Dungeon of Doom. Stefan Pokorny, the founder of Dwarven Forge, donned the Dungeon Master’s cloak and led a tenacious group of adventurers to their ultimate fate.

The set up was unique at Fanfaire, the setting dramatic thanks to theatre lighting. Attendees entered the mostly dark theatre and found, spread out on a table, the dungeon they would face covered in cloth. Over fifty people signed up and the session took on a comfortable ebb and flow as characters were killed off and new friends joined the fray.

Running a first edition game, Pokorny dragged his participants into the world of Valoria and deep into a crypt that was more than anyone bargained 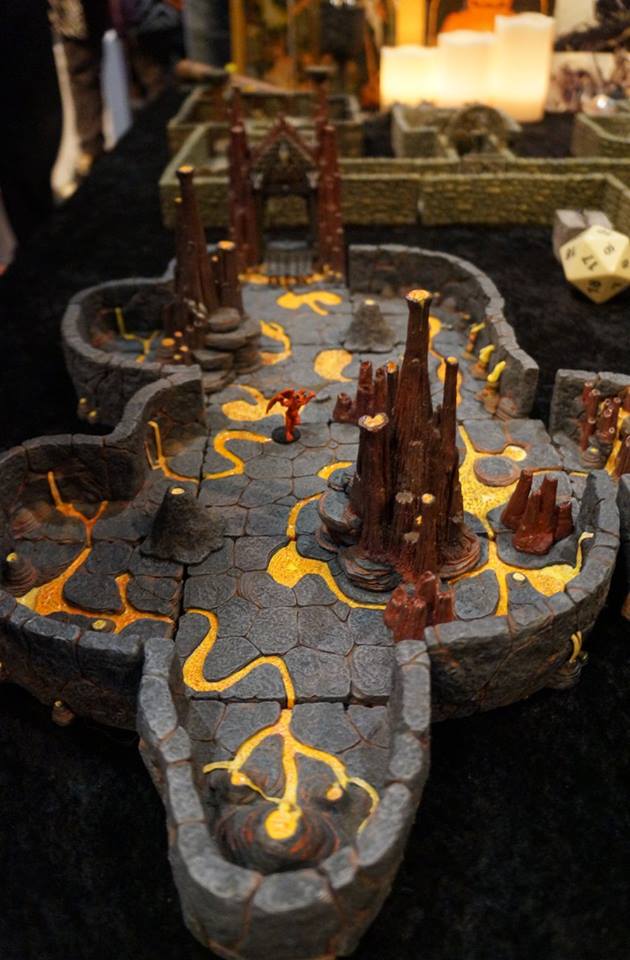 for. After fighting lizard folk, navigating around a cave troll, and my own character dying from a poison-trapped chest, the adventurers met their match: a roper. At the end of it all no one made it out alive, but we got to see the impressive detail on the rest of the untraveled dungeon.

After playing on Dwarven Forge terrain, I can say there is nothing else out there comparable to the quality and detail. The pieces in the dungeon were sturdy, well painted, and easy to put together and pull apart. Later, at the booth, Pokorny shared about their newest material, dwarvanite, which will make their pieces more durable. Players will be able to “run over them with a car” and the pieces will last, meaning even the toughest dragon won’t stand a chance against this terrain.

As someone who has mostly played Dungeons and Dragons online through Roll20, the hands-on experience was a treat. In-person role-playing is always a bit deeper than through voice chat, but beyond that having terrain on hand really sold the fantasy world. There is something inherently satisfying about moving a mini around actual physical terrain.

Not only does Dwarven Forge provide the terrain, but the details that go into it are extreme. In the dungeon alone there were walls to climb, holes to fall into, and all of it was modular so a DM could mix and match to their heart’s content. Having to traverse over a large crevasse feels more intense when you’re actually able to see and feel it right on the table.

Even though no one made it out in one piece everyone was delighted to get the chance to play at this level. The Dungeon of Doom is only one of many sets that Dwarven Forge offers for purchase. If you’re a player who wants a good gift for your DM, a DM wanting to take their play to the next level, or a huge nerd who wants something a little more tactile than Legos, Dwarven Forge has got the answer.

2 thoughts on “Fanfaire NYC 2018: Taking a Trip through the Dungeon of Doom by Dwarven Forge”