The Dam Keeper is a gorgeous graphic novel that serves as a sequel to Kondo and Tsutsumi’s award-winning short film of the same name. 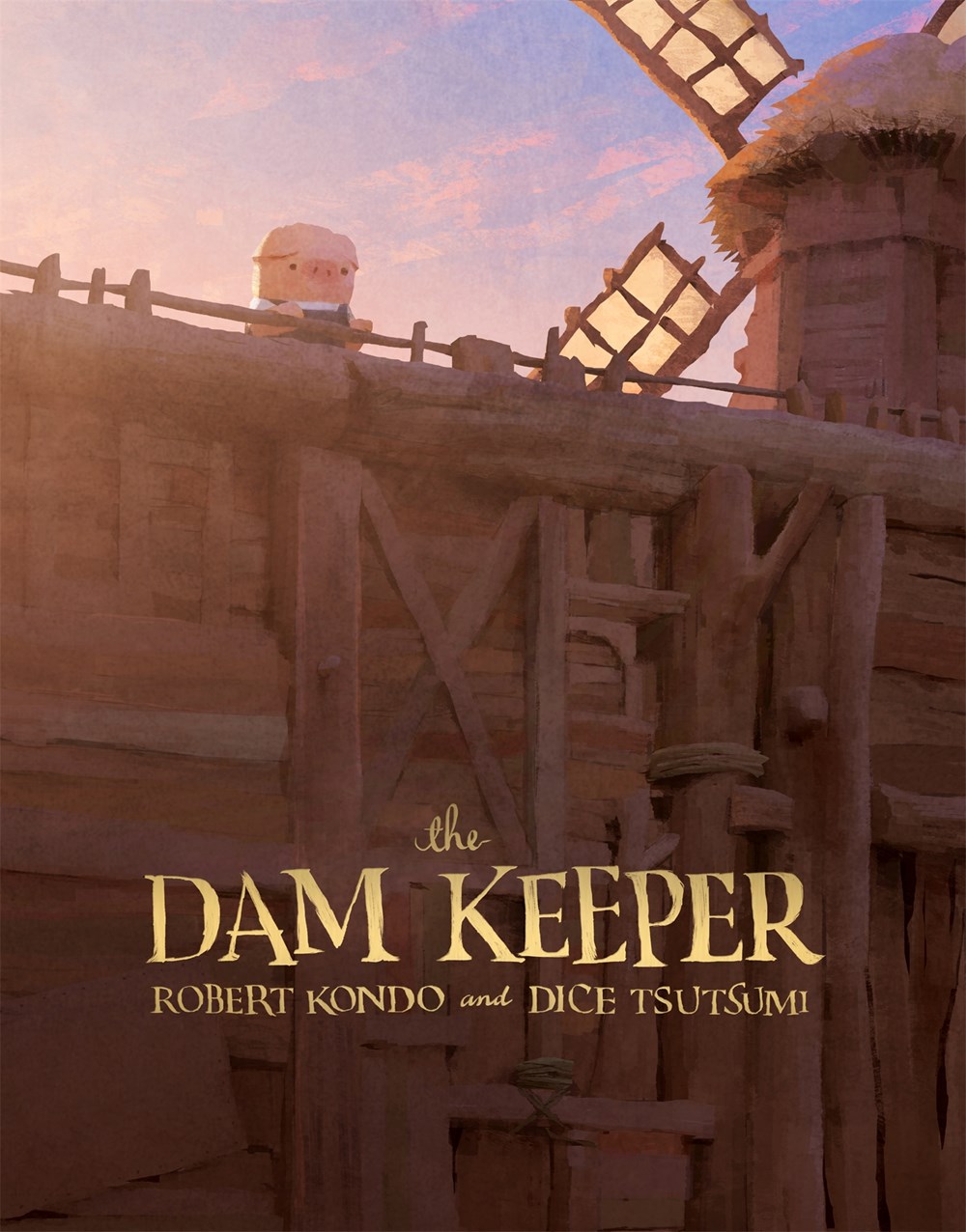 
Rating:
The Dam Keeper is a gorgeous graphic novel that serves as a sequel to Robert Kondo and Dice Tsutsumi’s award-winning short film of the same name. I actually read the book without having seen the film first or even realizing that it was a sequel to anything. The book manages to stand on it’s own and the story is very easy to jump right into. So don’t be discouraged from reading it just because it’s a follow up to something else!

The Dam Keeper tells the story of a young pig named, well, Pig. He lives in a world of anthropomorphic animals terrorized by a mysterious and deadly fog. Pig keeps this fog from overwhelming the valley in which he lives by maintaining a powerful windmill atop a massive dam. He inherited his duties from his father who presumably committed suicide by walking into the fog one day.

But while Pig’s entire life revolves around protecting his community, that doesn’t mean he has a whole lot of friends. He has just one, in fact: a young fox named Fox. But Fox has other friends including the bully, Hippo, who never misses a chance to tease Pig.

The three become an unlikely trio of adventurers in The Dam Keeper as they explore the world beyond the dam. After the fog recedes the kids find themselves stranded out in this very dangerous, seemingly unexplored world. And so they must work together to find their way home before the fog comes rushing back.

Probably the most obvious thing about The Dam Keeper is how gorgeous the artwork is throughout. This is one of the best looking books I’ve read in a while. It captures much of the same look as the short film, while improving on it to a certain degree. The ‘brush strokes’ are clearer in the book versus the film but the character designs and world are much the same.

One of the things that stuck out to me about The Dam Keeper were the odd character names. I don’t understand how, in a world where animals talk and live ordinary lives, they all seem to take their name from their species. If they were just ironically calling each other ‘Pig,’ ‘Fox,’ and ‘Hippo’ then I’d understand that. But this whole naming scheme begs the question: what was Pig’s father’s name? What was his mother’s name? Were they all called Pig or did they just really give their kid a super unoriginal name?

Pig is an interesting character and it’s really sad to see how everyone treats him so poorly when he literally keeps the city safe. He’s a child entrusted with this immensely important job so you’d think people would treat him better.

But he’s a relatable character. I’m sure a lot of particularly talented kids have still felt like the odd one out even when trying to spend time with their own friends (as Pig does when he’s with Fox). Seeing Pig come into his own is a worthwhile journey all it’s own and it parallels the kids’ exploration of the world beyond the dam.

The book ends on a bit of a cliffhanger with the characters embarking on the next stage in their adventure. It leaves you wanting more, but it ends on what feels like a natural break in the story. The second – and currently final – book should wrap up the story nicely and I’m looking forward to seeing how Pig continues to grow.

The Dam Keeper is a beautifully illustrated graphic novel that tells a great story that readers of all-ages are going to enjoy. Readers are going to love Pig and they will find his journey captivating if for no other reason than the breath-taking visuals.

Folks who have seen the short film and those who have not will equally enjoy the story. And if you haven’t seen it you’ll likely want to by the time you’re finished. It’s a great read and I can’t wait to see what happens in the next book!