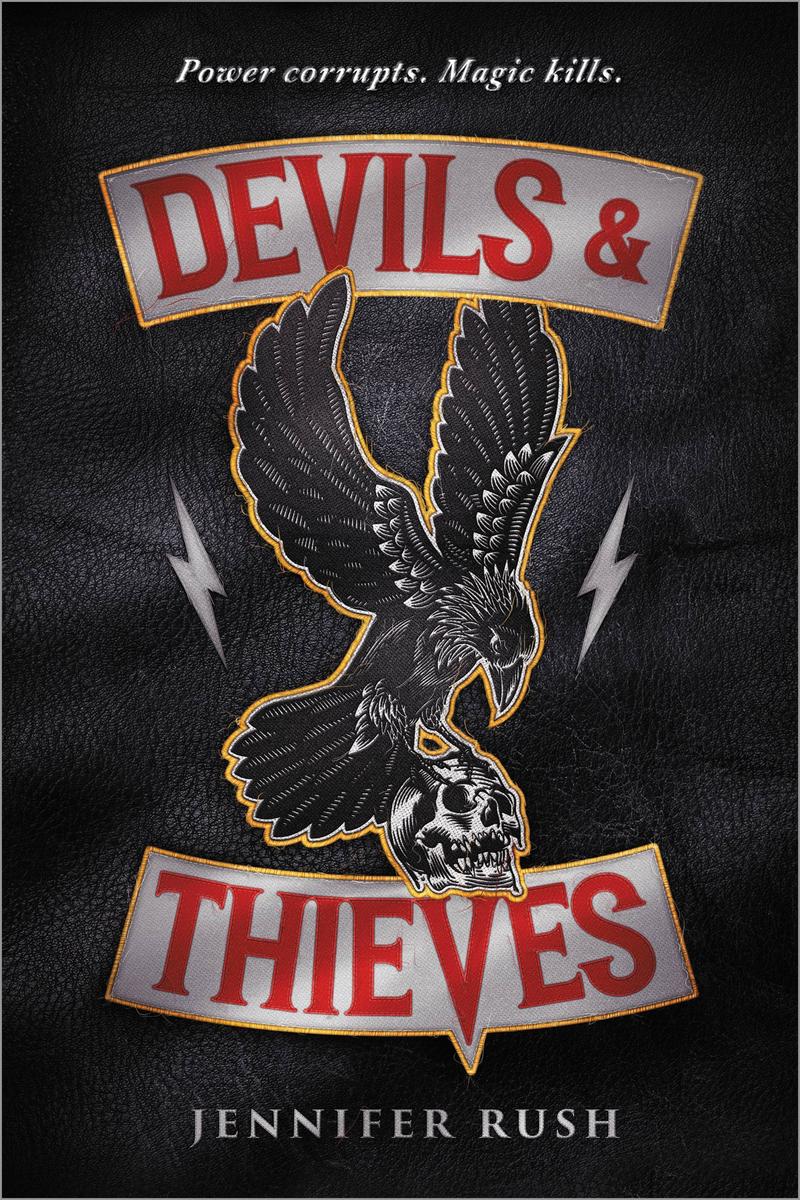 
Rating:
I have to hand it to Jennifer Rush: she sure knows how to pull a reader in based on a concept alone. Devils & Thieves pitches itself as a book about magical biker gangs and, really, how can anyone pass that up? It’s a book full of high-stakes magic and volatile rivalries — and, of course, handsome bikers. It’s the perfect choice for young adult fans who love stories with a touch of fantasy and an especially tumultuous romance.

Devils & Thieves follows a young woman named Jemmie who has grown up in a world that runs parallel to our own. In her world the ‘kindled’ are those able to use magic and they hide themselves away from the rest of mankind. Jemmie’s community – like communities of kindled across the country – revolves largely around the local biker gang  known as The Devils’ League.

While she’s not a member herself, she has grown up with the gang. Her father once helped run things before taking off on her and her mother. And her best friend, Alex, is the motorcycle gang leader’s sister. Of course, those aren’t her only ties to the gang as Jemmie herself has had something of a rough-and-tumble, on-and-off relationship with Alex’s brother, Crowe. When we catch up with them it’s most decidedly “off.”

To complicate things, Crowe has had a bit of a chip on his shoulder after his father’s death and he blames one of the rival gangs for it even though by all accounts his father died in a motorcycle accident. If the gangs could keep their distance from one another maybe the situation could defuse itself but the start of Devils & Thieves coincides with an annual festival that brings kindled bikers from all over the country together. Soon after suspicions begin to run rampant as people start to disappear…

And Jemmie, who hardly trusts her own magic and really wants nothing to do with it, is thrown into the middle of a powder keg that could be set off any time.

Devils & Thieves provides us with one of the most unique takes on the whole ‘magical world existing alongside ours’ concept that I’ve seen in a while. Jemmie lives in an interesting, fractured world that seems just as much bound together by magic as it is torn apart by petty rivalries. The kindled aren’t attending magical boarding schools or playing superhero as you may see in other series. Instead, they exist in a world where rivalries and alliances are ever changing and magic is seemingly secondary.

Unfortunately, the book doesn’t really elaborate on the world-building as much as I would have hoped. I’m still not entirely sure why the kindled – who clearly have incredible powers – limit themselves to biker gangs. And I don’t understand why the only options for those with magical abilities seem to be aligning with one of the gangs, working for the loosely explained policing agency known only as the Syndicate, or living some unremarkable life among non-magical people.

That said, I thought that the author did a great job of making us care for Jemmie’s little community. We got to know quite a few different characters including older members of the gang, her friends, and her parents. We learned a little of the Devils’ League history and how Crowe came to be in charge. And I think that helped supplement the lack of larger world-building. We came to care about the smaller picture and the story that was unfolding right in front of us.

Jemmie comes a long way throughout Devils & Thieves. I’ll admit, she wasn’t my favorite character in the beginning. Part of that is probably because I’m always a bit put off by young characters that treat their substance abuse problems like they are no big deal. Jemmie drinks a lot in this book. And while the book justifies her drinking by tying it to her inability to reconcile with her magical abilities (and her father’s abandonment) it still was hard to look past.

Thankfully she does start to address these issues throughout the book and by the end of the book she’s evolved into a much more capable — and, honestly, interesting — heroine. Jemmie’s magical abilities are incredibly unique even in her world and seeing how those play into the story was one of the better parts of the book. Devils & Thieves is, after all, meant to be somewhat about the magic. And while the magical elements seem a bit diluted in the beginning they become much more important and a lot more developed later in the book.

Now, this is a heads up for people who either do or don’t like young adult romances: a lot of Jemmie’s story revolves her little love triangle between Crowe and a rival gang member, Darek. While I’m usually not a huge fan of love triangles I admit that it really worked in Devils & Thieves.

Crowe isn’t the most likable guy at first but you really get to know him as the book progresses. And Darek is an intriguing character from the beginning as he becomes one of the few people who seems to accept Jemmie as she is. Watching how everything plays out with all it’s incredible twists and turns was great and I don’t think readers will be disappointed by any means by the book’s end.

All in all, despite the book’s flaws I found myself reading through Devils & Thieves at a brisk pace simply because I wanted to know what would happen next. The main plot focusing on the mysterious disappearances and the devilish happenings going on in secret throughout is great. And it leads to a very satisfying, shocking conclusion. Not only that, it sets up a very intriguing ending that will leave readers desperately wanting answers as well as a sequel.

Devils & Thieves is a going to be a fun read for young adult fans with a love for the supernatural, magic, and exasperating love triangles. If you’re like me and tend to overthink things, you might struggle a little with characterization and world-building. But if you stick it out you’ll find an intriguing community of magical biker gangs and an overall plot that leads to a very satisfying pay-off.