Catch Up With Archie and the Rest & Bring Home Riverdale: The Complete First Season on DVD! 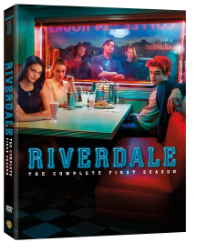 The CW’s modern take on the innocent adventures of a “swell” ginger and his friends came out of seemingly nowhere. Admittedly, the target audience is clear in the first few minutes of the series: young adults. Regardless, dark narrative elements and a focus on several generations within the show make this a suitable watch for an older audience.

Of course, there’s more to say for the baggage between the more mature members of the show’s cast.

Riverdale perfectly captures the aesthetic beauty of small town life while riddling it with subversive skeletons in the closet.

Starting the season with a murder and developing a dark twist on the classic Archie franchise was a recipe for success. Of the CW shows I’ve been privy to binging, Riverdale has maintained a swift pace without fail. Throughout the first season, every character of the main cast experiences significant character development. Furthermore, the relationships between the townies ebb and flow superbly. Everyone knows everyone in this town and there’s bitter history between almost every family.

As the series progresses, the reasons behind these sizable rifts reveal themselves in perfectly balanced fashion. The veneer of innocence over this sweet town peels away to expose the dirt and ugly decadence that the town has been built on; slowly at first, but then dropping away in dollops later on.

On a brighter note, the soundtrack is great.

It’s comprised of heavy hitters like Imagine Dragons and smaller names like Adam Jones. No song felt out of place and every song perfectly amplified the tone of the scene. The cinematography struck a chord as well, with subtle visual genius that made the less engaging scenes enjoyable to watch and the most intense scenes all the more riveting.

Also: the cast is impressive.

Even a mild purveyor of the Archie franchise, such as myself, would be familiar with the appearances of the original characters. I’m sure that casting was nothing short of a nightmare. The casting powers that be truly hit the mark on this one, without most actors/actresses bearing too stark a contrast to their fictional counterparts.

Of course some liberties were taken, but I applaud them heartily. I also appreciate the effort to bring diversity and realism to the table. While this may be an arguable detail, it’s important to note the vastly different tone of this series to the original comics. It is far more significant for the characters to fit the world they represent, rather than a tale from another time.

So what does the DVD set have to offer in terms of bonus features? Riverdale fans won’t be disappointed. There are a number of great extras included on the DVD release and you’ll definitely want to check them out.

The New Normal
This featurette is a brief introduction to the core plot points of the story and its central characters. We get a chance to hear directly from Roberto Aguirre-Sacasa, executive producer, and Yolonda E. Lawrence, supervising producer. We hear about the sources of inspirations for the show’s murky tone and film noir elements.

I Got You & These Are Moments I Remember
These are two longer, uninterrupted, versions of scenes in the show during which characters performed original music. If you enjoyed the original songs in the show, this will be a sure treat.

Riverdale: The Ultimate Sin
Whereas The New Normal discussed characters, this featurette delves deeper into the tone of the series. More specifically, we get the details behind the choice to pin a murdered teen as the first season’s focal point. It wasn’t as linear of a decision process as you’d think.

Riverdale 2016: San Diego Comic-Con Panel
While it’s a relatively short panel, we get to hear from every member of the cast on the process of becoming a Riverdale townie.

Deleted Scenes
Personally, I would recommend watching the deleted scenes by episode; Meaning, watching each a deleted scene after first watching the corresponding episode. The real value of each scene differs from one to the next. Although if you’re a proud citizen of Riverdale nation (as coined by Brian E. Paterson), like myself, then you’ll gorge yourself on all the “rd” you can get. Most of the scenes offer beneficial context to the characters or the relationships they have with one another.

Gag Reel
Simply put, hilarious. There’s a certain art to presenting mistakes on set as enjoyable extra content. Kudos for making me wish I was there, which is the mark of any proper gag reel is it not?

Riverdale‘s first season kept me entrenched in the drama and suspense from the opening credits of the first episode to the closing credits of the last one. A show is only as great as the sum of its parts and each of these parts has been buffed to produce a lustrous finish.

I had little hope for this series with the current entertainment climate, one of constantly rehashing the old rather than developing the new, which we’ve found ourselves trapped in. However, I can gladly say that I was surprised and find myself poised for a second season. Not to mention, the special features complemented the series and the dvd set better than most do!

Riverdale: The Complete First Season is available on blu-ray and DVD today – August 15th. The second season starts up on October 11, 2017 at 8 PM on The CW! Catch up while you can and watch the full first season now.

And if you’ve already seen it, here’s a little something to tide you over while we wait for the next season to start!