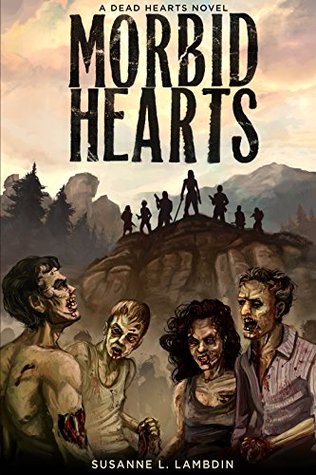 
Rating:
Cadence Sinclair was a seventeen-year-old girl from America’s heartland who loved horseback riding, a comfortable pair of jeans, and hanging out with her friends.

That was before the Scourge.

If you are looking for a new post-apocalyptic story to sink your teeth into, look no further than the Dead Hearts series. Starting with Morbid Hearts, Lambdin’s novels take the age old zombies, vampires, and lycanthropes and turns them into something that is entirely new and exciting. I know we’ve all been bogged down with zombies lately, but trust me, this isn’t your average zombie novel.

Following the story of Cadence and her group, The Fighting Tigers, as they navigate this new world where there is no government outside of the Freedom Army, a citizen run group. Set in Colorado Springs, patrols of teenagers fight and try to survive the zombie scourge which destroyed civilization, while the adults try to fight off the zombies and maintain some resemblance of life.

The only way to survive in this new world is to fall in line, work hard, and hope the zombies don’t break the fence. However, things go awry when a large group of outsiders comes seeking a place to live. The plot thickens even more when it is discovered that the virus they know creates zombies mutates. No longer is it just humans versus zombies; it’s humans against zombies, vampires, werepumas, and more.

Honestly, going into it, I expected a normal zombie story. A tough girl fights her way in this new world, not only finding herself, but true love along the way. This is not that type of story. Lambin gives us a brand new twist that will keep you entertained from the first chapter.

Cadence and the other girls in this novel are strong, capable, and don’t-take-anything-from-anybody types. Finding characters like these, that remain such throughout the entire story is a great change. Sure, there’s a little romance, it is a book about teenagers after all, but the romance isn’t overwhelming or distasteful. The focus remains on the characters and story, not the budding relationship.

Lambdin’s style is easy to read and follow. One could finish the five-book series in a weekend easily. The world was built solidly and realistically. There was nothing that made me question if that could really happen in a world that has gone mad. Even the style of speaking of the former military guys was spot on, which, as a military kid, is a big deal to me. It was a good, twisty, surprising story to follow.

Truly, this is a new take on the whole zombie virus story. But it is also so much more than that. Strong female leads, enough twists to keep you guessing but not confused, and a realistic view on what would actually happen in an outbreak. Cadence herself is just a great reason to read the story.

If you like The Walking Dead show, you’ll like this book. All of the grit of that, and the added pluck of teenagers growing up in a world shaped by supernatural beings. I easily devoured this series and enjoyed every bit of it.