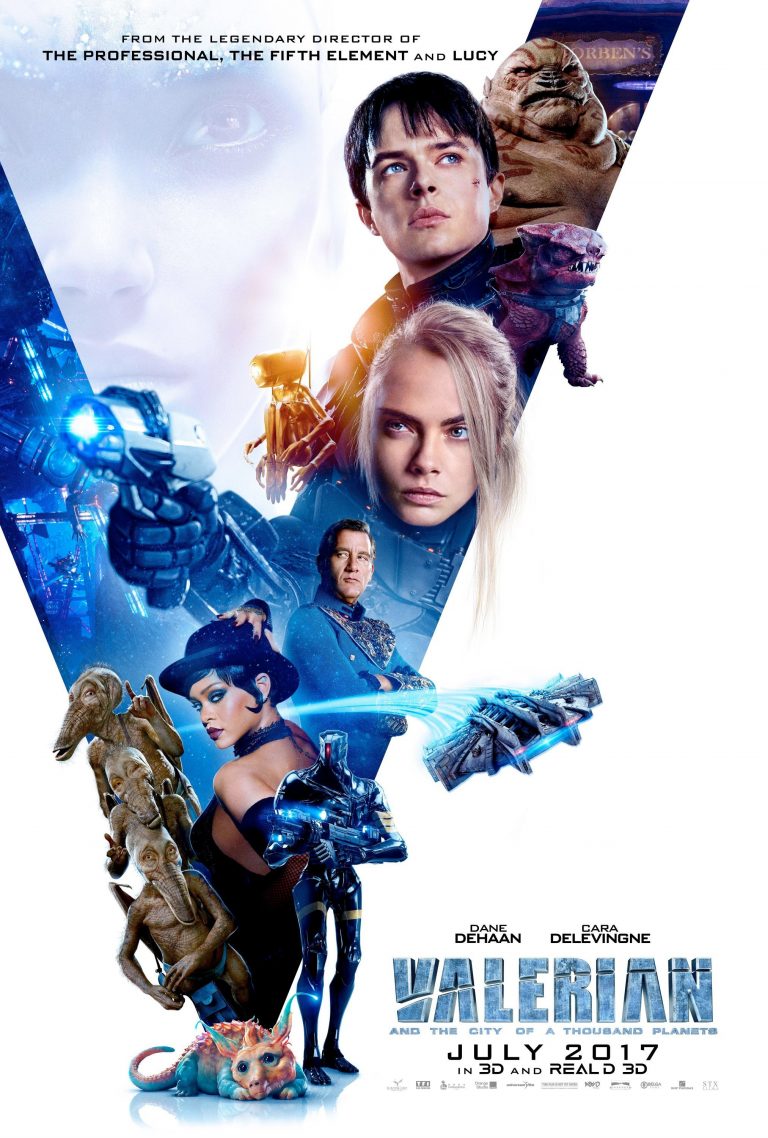 Luc Besson is back and he brought with him a movie seemingly only he can make! Starring Dane DeHaan and Cara Delevigne, Valerian and the City of a Thousand Planets tells the story of two space cops who, in completely what they think is just another mission, find themselves wrapped up in a military conspiracy spanning decades and lightyears.

I loved it. This movie is so absolutely buck-wild, from its opening depicting the gradual, centuries long build-up of space stations set to Bowie’s ‘Space Oddity’ all the way through to the final slow zoom out.  That opening shows Man’s gradual ascent to space, then to first contact, then second, then third, then dozens upon dozens all of which leads to the creation of the main setting for the flick, Alpha, a huge massive space station full of millions of life forms from thousands of races all tucked away in their own corner of this connected world.

Valerian is not a perfect movie. Far from it. The acting is pretty not good across the board, though Cara Delevigne does seem to be light years ahead of Dane DeHaan, whether that’s in comparison or because she is doing a good job I’m not entirely sure. DeHaan isn’t the best at emoting, but it also seems like he is trying to go gravely, which gives him a base tone the whole movie.  Another big problem is Rihanna’s character Bubble. She is fun, gives Valerian some life talk, but her story whimpers out rather unsatisfyingly.

DeHaan plays Valerian, naturally, a major in the human governmental forces and he seems to be a bit of a card. Think Han Solo but with more allegiance to the cause of authority and you’re not far off. He isn’t afraid to shoot first and answer questions later, and he certainly isn’t afraid to get his hands (or anything else for that matter) dirty.

But what he does want is to make his partner, Delevigne’s Lauraline, his lady for life. But before that happens they have to finish this job, returning a Replicater to the government. The Replicater is a little lizard-like cat creature that can reproduce anything it swallows, essentially by cooing a lot and then (so it appears) by pooping hundreds upon hundreds of copies. It’s bizarre but it’s the McGuffin, what ya gonna do ya know?

The visuals of this movie are absolutely astounding, weird, and jam packed with action. The world is so alive, there is always something tucked into a nook or cranny in the background. Luc Besson is back and really lets his inner fanboy loose adapting this French comic property, and that enthusiasm is contagious.