Review: ‘Rise of the Dungeon Master: Gary Gygax and the Creation of D&D’ by David Kushner & Koren Shadmi

Rise of the Dungeon Master 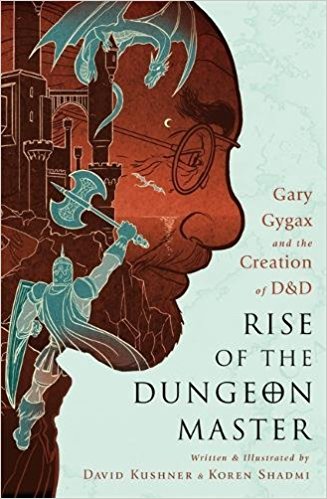 You’d be hard pressed to find someone who doesn’t at least have a passing familiarity with Dungeons and Dragons. The roleplaying game has become something of a cultural cultural icon and sitting down for a campaign is a nerdy right of passage all around the world. But while people are familiar with the game they aren’t necessarily familiar with the man behind it. Rise of the Dungeon Master is a graphic novel that serves not just as a history of Dungeons and Dragons but also as a biography for Gary Gygax himself.

The book is based in part on a profile that author, David Kushner, did on the original dungeon master back in 2008 for Wired. You can still read that profile online over at their website. Almost ten years later, Kushner has partnered up with Koren Shadmi to turn that profile (and other interviews he conducted with both Gary Gygax and the David Arnesan) into an engaging, topical graphic novel for both long-time fans of the game and the newly interested.

While Gary Gygax may have passed away in 2008 this actually feels like the perfect time for this book to come out. Gygax changed tabletop gaming forever and his legacy shows no sign of dying out any time soon. In fact, Dungeons and Dragons feels like it’s become even more prevalent lately which probably owes a lot to the renewed interest in science fiction, fantasy, and nerdy pastimes that we’re seeing these days. It doesn’t hurt that the game played a very big part in Netflix’s hit series Stranger Things.

As someone who spent a good part of her graduate school days playing Dungeons and Dragons with friends and classmates, I hate to admit that I didn’t really have much background on the game or Gygax until reading this book. Sure, you can skim over the Wikipedia articles but Kushner and Shadmi’s book feels much more personal. Because it’s based on Kushner’s own interviews, there’s an almost conversational tone to much of the book and some of the dialogue comes directly from the source.

The book starts and ends with scenes referencing Kushner’s interviews with Gary Gygax shortly before his death and these provide really great bookends for the story told within the following panels and pages. Kushner walks readers through Gygax’s childhood through his budding interest in traditional war games and his interest in developing games of his own. He offers a look at the relationship between Gygax and his partner, David Arneson, as well as frank discussions about the less than amicable split that eventually came about. And he follows these two men through the ups and downs of the game’s history – as well as what they did afterward in the later years of their lives.

But the book is hardly about these two men alone. The book’s subtitle ‘… and the Creation of D&D’ really deserves more attention. A large part of the book focuses on Dungeons and Dragons itself and it’s influences. There’s a whole section on the negative controversies that popped up in the late 1970s and early 1980s, establishing a ‘satanic’ connotation with the game that even today some people still believe in. And the book recognizes all the ways that Dungeons and Dragons has influenced not just tabletop gaming but the rise of video games as well.

The bulk of the book – especially those those large parts focusing on Gygax and Arneson’s stories – is told as if you’re experiencing Gygax and Arneson’s lives through a Dungeons and Dragons campaign. I’ll admit, I wasn’t a huge fan of that device. But after a while you get used to it. Second person doesn’t really feel natural but eventually you get pulled into the story enough that it doesn’t bother you took much.

The thing that drew me to this book the most, though, was it’s graphic novel format.

I love non-fiction graphic novels. I think they’re amazing and it’s such a uniquely visual medium through which to tell stories. Koren Shadmi does a phenomenal job with the book and his name is one of the reasons I jumped at the chance to check out Rise of the Dungeon Master. If you remember, I reviewed a book that he worked on called Mike’s Place a couple of years ago and I loved it.

Shadmi approaches the real-life, biographical parts of the story and the more fantastical, game-related parts with equal care. These different elements of the book flow together well and his illustration helps bring everything together.

Ultimately, Rise of the Dungeon Master is a really great read – especially for Dungeons and Dragons fans. The book does a good job of providing a general overview of the game’s history and development as well as it’s lasting influences on pop culture. (They seriously get props for adding in a panel on Stranger Things so close to the book’s release – you’ve got to imagine that was a bit of a last minute addition.) And it doesn’t pull it’s punches when discussing the more controversial parts of the game’s history – or Gygax’s relationship with Arneson.

If you’re a long time fan of Dungeons and Dragons or just someone looking to learn a bit more about the franchise, Rise of the Dungeon Master is a really cool book to pick up. It looks great and once you get past the campaign-esque narration, it’s a really interesting story about one of the most ubiquitous tabletop games around. Check it out!