To the Hollywood Pantages Theatre! The Perks of Being a Season Ticket Holder

This year I decided to do something crazy and classy: I bought season tickets to the the Hollywood Pantages Theatre. I’ve always enjoyed live theatre, the music, the dancing, the stories, but it took a very specific circumstance to finally force me to purchase more than just a passing night ticket.

That circumstance was Hamilton. The multi-award winning Broadway musical was announcing it’s tour, which would land in my wonderful land of Southern California in August of 2017. The potential problem? Like with every other location this play has attempted to land, it is extremely difficult and incredibly expensive to land those coveted seats.

The Pantages’ solution? Buy a season pass. This draws those who might otherwise not regularly attend into the world of whimsical set changes and permanent art deco structures. The answer seemed obvious, I wanted to be guaranteed my Hamilton tickets and so I took the plunge. Season ticket holder, here I come!

This season I have seen or will see: Hedwig and the Angry Inch (the lead brilliantly performed by Darren Criss of Glee and A Very Potter Musical fame), The King and I, Finding Neverland (touching and sweet, perhaps more so than the film of the same name), An American in Paris (I’ve never seen the film, and yet the play still oozed Gene Kelly style), The Bodyguard (the one I am, admittedly, most uncertain about), Book of Mormon (I was unable to attend when it originally arrived at the Pantages, and have been eagerly anticipating the day when I will meet these friendly missionaries), and to top it all off, Hamilton.

For the seats and day I have (Friday nights), the total comes out to about $50 a show, which is a considerable savings from individual ticket purchases. Not only that, but the system allows for easy exchanges should you be unable to make a specific night of the show.

One of the added bonuses, apart from the elite sense of being that you can feel at the theatre, they also offer some special opportunities specifically for season ticket holders. For one, additional Hamilton tickets went on sale for all of us, so I am now seeing it twice, yes, twice!

But one of the most delightful experiences was two weekends ago, between the closing of one show and the opening of the next, when they allowed us to attend a special tour of the theatre. During the experience, there were curated segments, with docents willingly talking about the structure, history, and performance of the theatre, and backstage (and onstage!) opportunities. 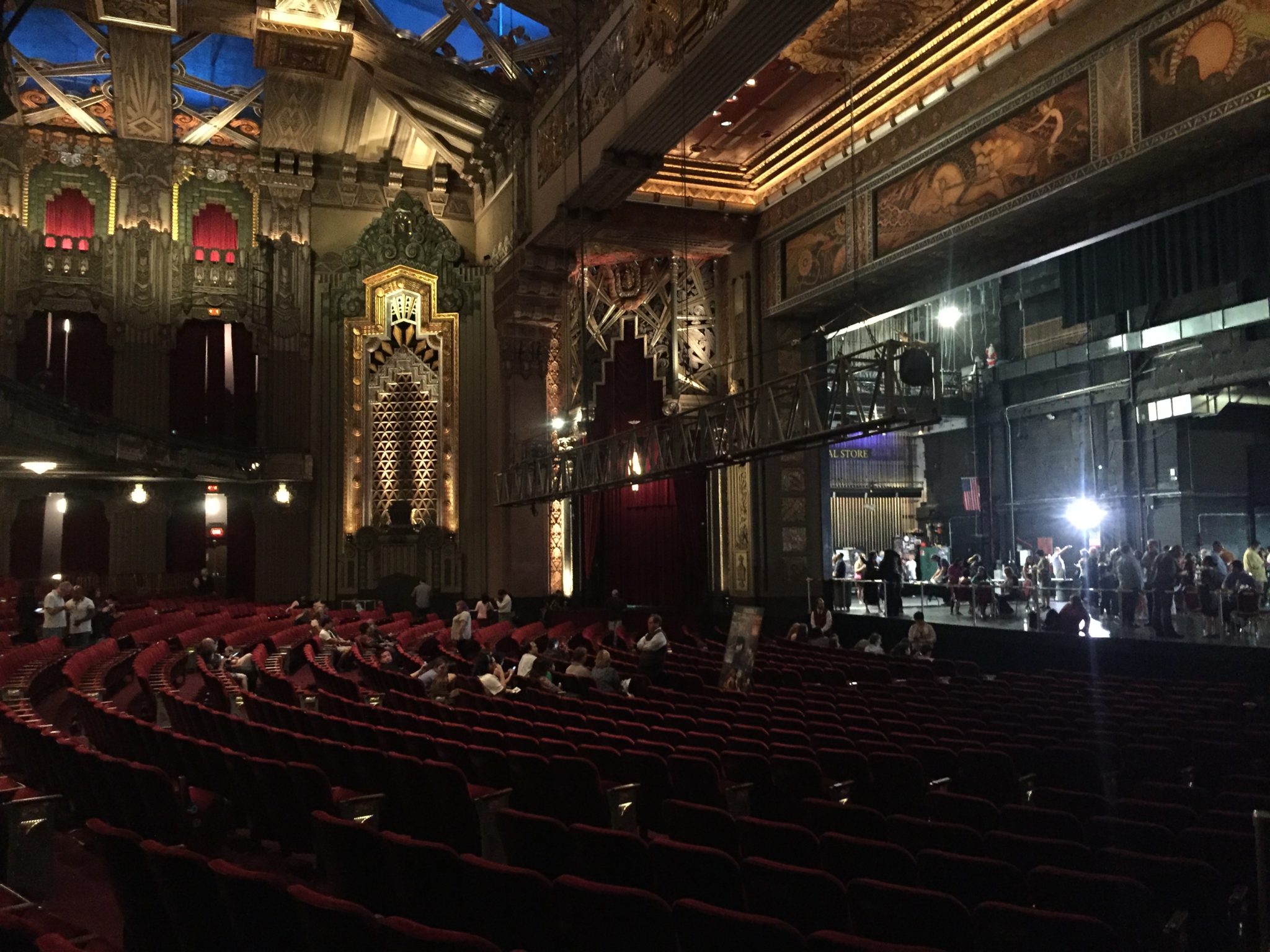 In the seats, guests listen to stories of the history of this building and the shows that have been performed here. Onstage, fine foods and drinks are had. (Including water bottles, which usually cost $4, for free!) 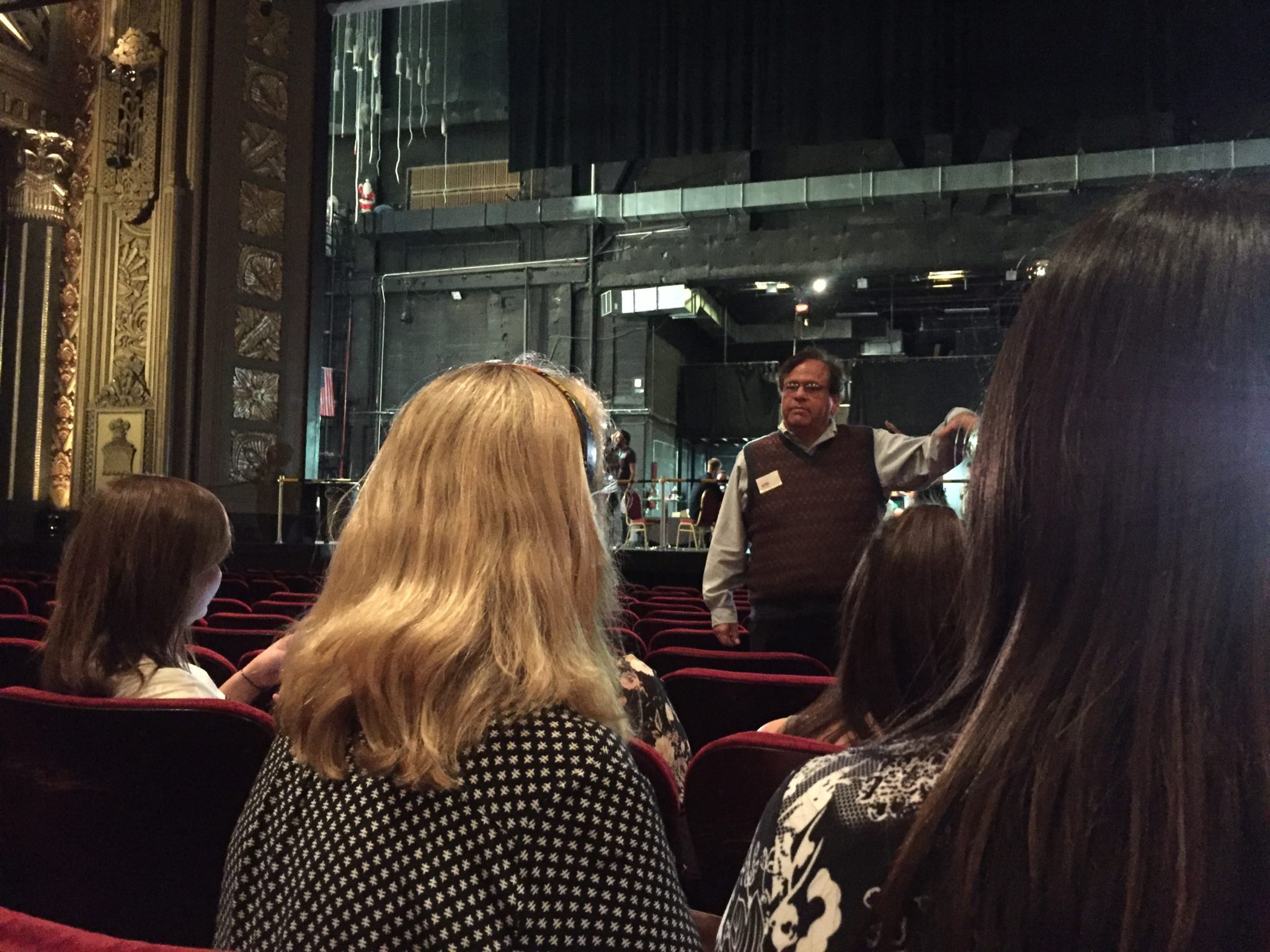 This kindly docent entertained a most unusual crowd who wanted only to hear tales of ghosts and mayhem, to which he obliged. One story in particular, of a woman’s voice that is often heard singing from the corner of the balcony. It is believed that it belongs to a woman who once died while attending a show. The docent is a skeptic, but the crowd was enthralled. 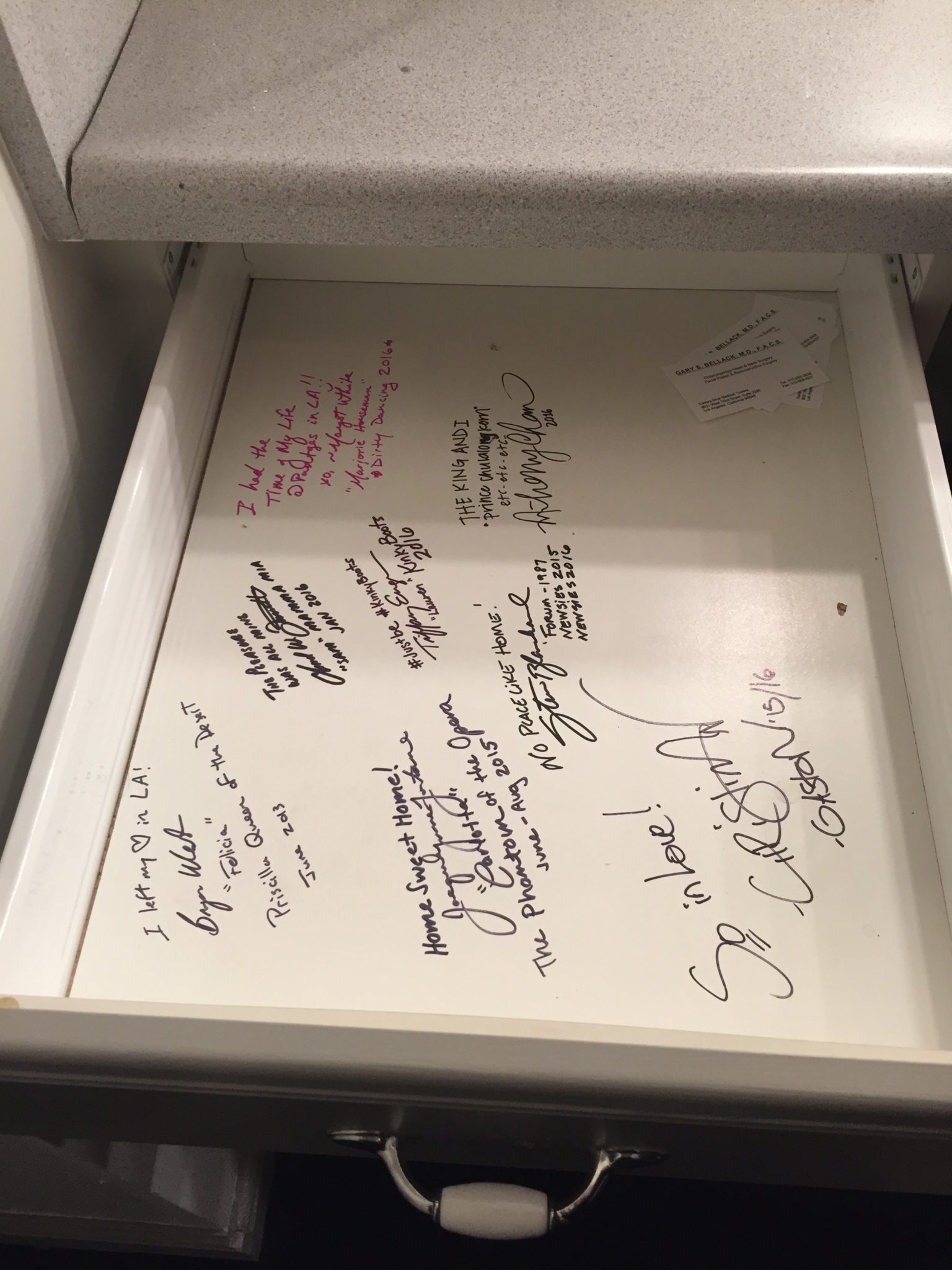 And any theatre would be incomplete without the signatures of those who so lovingly performed upon its stage. Open any drawer, any cupboard, look behind any wall, you will find a scene much like this, and bask for a moment in the glow of the talent that once stood where you do now.

This special event only solidified my love of the theatre and my desire to remain a season ticket holder. If you live near the Hollywood Pantages, or any other theatre, I highly recommend that you consider it. At the Pantages, the upcoming season includes Disney’s Aladdin, Love Never Dies: The Phantom Returns, School of Rock, The Color Purple, On Your Feet!, and Waitress.

I have yet to see a bad show; yes, I liked some more than others, but have also been completely surprised by which one’s are my favorites (so far, Finding Neverland), so it seems well worth the risk. Go, sit, and be transported.

3 thoughts on “To the Hollywood Pantages Theatre! The Perks of Being a Season Ticket Holder”