‘MWD: Hell Is Coming Home’ is a Graphic Novel That Doesn’t Shy Away from the Realities of War and Coming Home

A REVIEW COPY OF MWD: HELL IS COMING HOME WAS PROVIDED BY THE PUBLISHER IN EXCHANGE FOR A FAIR AND HONEST REVIEW. NERDOPHILES WAS IN NO WAY COMPENSATED FOR THIS REVIEW. OUR OPINIONS ARE OURS AND OURS ALONE. 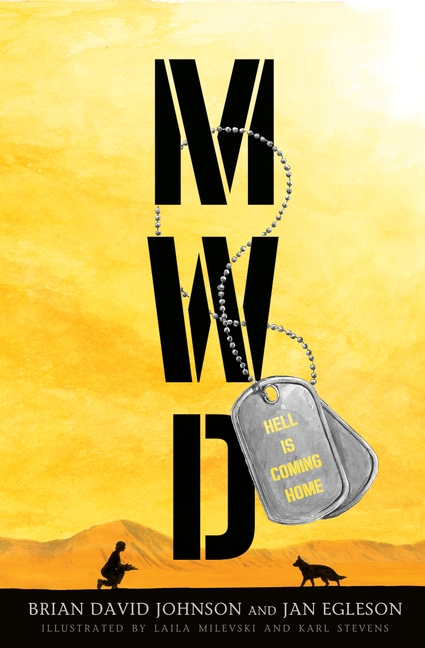 
Rating:
While some publishers are going into the Valentine’s Day season with sappy romances, Candlewick Press is celebrating the day with a very frank (and rather depressing) look at what homecoming means for some of our veterans. I’m sure that the holiday really has nothing to do with this release but it does help to highlight the impact of MWD: Hell is Coming Home. Often times when we imagine soldiers coming home from war we think about the happy homecoming videos we see on YouTube of families reuniting and dogs gleefully greeting their owners after months apart.

But for some people that is not their reality. Even for those who have those people waiting for them at home, transitioning back into the civilian world can be difficult.

MWD: Hell is Coming Home follows a soldier named Liz who is injured and suffers a tragic loss overseas. A military working dog handler, Liz was very close to her dog, Ender, who ends up being killed. I’d say ‘spoiler alert’ but it’s pretty obvious from the beginning that the dog doesn’t survive.

At least, that dog doesn’t survive.

One of the thematic parallels throughout the book is between Liz and a troubled stray named Brutus.

Liz struggles in her day to day life once she returns home to her nameless small town. She’s staying with family that could care less about her. She’s starved for any meaningful relationships but can’t seem to rebuild the ones she had. And she finds what comfort she can in heavy drinking, which ultimately leads to a lot of problems for her down the line.

She’s self destructive and brash – often ruining the few good things she does manage to build in her life. Brutus, similarly, has a mean streak. He’s a good enough dog at times but he’s got behavioral issues and becomes dangerous – especially to other dogs. She’s determined to give him a second chance even as she struggles to see herself as worth the effort.

Throughout the book both of them go back and forth from making progress to slipping into their old ways. It’s a never ending struggle that reflects what veterans dealing with PTSD often go through. While in the end Liz starts to get things together she’s hardly moved past the issues in her life. But she starts taking steps forward.

MWD: Hell is Coming Home does not shy away from the darker realities of war and coming home. From dealing with grief to alcoholism to sexual assault in the military, the book tackles a wide variety of issues. The writers get real props from me for doing so from the perspective of a female soldier. Liz is a relatable character going through tough times after experiencing very serious trauma. Her reactions to certain things – such as a tribute for a brain damaged classmate and fellow veteran – are raw and real.

I’m not going to lie, this book is not for everyone.

It’s not a happy book and very few good things happen. What few good things that do happen are often overshadowed by their inevitable falling apart. Even for me, the story got a bit off-putting at times and I had to struggle with my feelings about Brutus at the very least. (It’s hard to root for a dog that’s so dangerous he ends up killing another dog.) Still, it has a strong message and offers a unique, often overlooked perspective by focusing on a female veteran dealing with serious depressing.

The artwork is a little rough but after a while it really grew on me. I think it adds a lot to the story. It has an unfinished feel that resonates a bit with the book’s tough issues. There’s also a distinct way in which artwork throughout the book sort of shifts. While Liz is overseas and again at the end of the book once she’s started moving forward, everything is much smoother and clearer. While she’s at home, though, everything looks and feels a little less finished. I thought that was a nice touch. Liz’s world gets a little more defined.

All in all, MWD: Hell is Coming Home is a pretty decent book. It’s darker and the story will likely be hard for people to get into. One of the biggest complaints I saw in GoodReads reviews is that it has been improperly marketed as a young adult graphic novel. While I’m not sure if that’s true, I have to agree that this is not a book that most teens would enjoy. MWD: Hell is Coming Home is very much a graphic novel geared towards and intended for older readers. It tackles a lot of tough themes and it’s not for the faint of heart. I’d recommend that anyone who decides to give it a read keep that in mind.