Who is The Accountant? 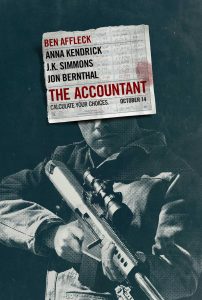 From the director of brother battling pic Warrior and the writer of The Judge comes Ben Affleck’s next action movie. That sentence seems like I’m selling the movie short some how, but really it should show you that the folks putting this out are quality, quality filmmakers. But does this movie add to that lineage? Let’s find out.

The Accountant tells the story of ‘Christian Wolff,’ a math savant who is on the spectrum and uses his skills as a CPA for small local businesses as a cover when not working as a forensic accountant for criminals who wanna see where their money is disappearing to.

That’s the elevator pitch. The movie stuffs 3 plots into the run time, the main story arc of Affleck being hired by a legit robotics business where he meets Anna Kendrick’s character, the backstory of the mysterious Accountant, and a third less solid plot following the finance cops, played by J.K. Simmons and Cynthia Addai-Robinson, as they hunt down the protagonists real identity.

The movie never seems to lag except for those finance cops bits. Well, two outta three ain’t bad!  The unfortunate thing is that really is the B Plot of the entire movie, taking up a lot of screen time for a mostly lackluster addition to the story as a whole. I think that time would have been better spent on the backstory personally, as their seems to be missing weight to Affleck’s later actions that would have been gained had we spent more time with his character (and character’s father and brother) as a youth.

I gotta say, I loved Ben Affleck in this movie. Watching him attempt to not be charming is delightful. His portrayal of a man with high functioning autism is interesting, for the majority spending it collected and stand-offish but in moments of intense worry he frazzles and I think that works.

His delivery of lines makes for laughs when he retorts to jokes or attempts them on his own, often the timing of his one liner is the cause for laughter but at times I worry the audience is laughing at the character and not with. Jon Bernthal gets to play a much more lively version of his traditional gruff military man and that was fun to see as well. John Lithgow shows up and does what Lithgow does for better or worse.

As an action movie it delivers in very John Wick-esque fashion. The gunplay is efficient with many head shots, which makes sense given the protagonist’s mentality. It is surprising how long into the movie it is before the action really starts but once it does it continues until the end.

Personal fave, stuntman, and former UFC Light Heavyweight Tait Fletcher shows up as Thug #1 and does what he does (get beat up by leads).  There’s also some legit jiu jitsu, with Affleck sinking in a leg triangle on a guy. These last couple things may just be personal joys but hey, maybe you’ll dig ’em too.

One other quibble with the B Plot. We see Cynthia Addai-Robinson’s character attempting to track down any links to find the accountant’s identity. We are unfortunately made to watch her google and then wiki various alias’s of Christian Wolff, including Lou (Lewis) Carroll.

First of all, there are two scenes of this when one would have sufficed (if the audience can guess the link between these people in one go, don’t have the character who is doing the investigating need multiple go’s at it) and also watching anyone google their way to answers is the most boring thing on film.

Really, The Accountant  is an enjoyable enough flick with some dope action and fun lines. I think it misses the mark for having real heart, mostly because of the B Plot as mentioned, but the attempt is there and it’s forgivable.

Gavin O’Connor having done Warrior, another personal fave (the movie is art, don’t even try and dissuade me), is clearly capable of having a film that hits those beats of action and heart but couldn’t quite combo it all together like last time, instead hitting a passable action flick, which isn’t so bad an outcome. The Account is in theaters everywhere.