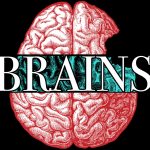 Alice is your typical co-ed, except she’s studying neuroscience in a post-apocalyptic world. She does all your typical college student activities: attends classes, volunteers in a research lab, and patrols for undead zombies on campus.

She’s also a little boy-crazy. Alison is searching for a boyfriend, and ever since the zombie apocalypse died down (*ha*), she thinks that procreation needs to become a priority again. She thinks she’s found perfect mate in fellow student Damian. The only problem? Alison suspects Damian might be a zombie.

The rest of the series follows Alison and the other university students through their everyday lives, focusing on Alison’s friendship with her civilized-zombie best friend, Carl, and her quest to prove Damian walks among the living.

When a grisly murder happens on campus and Carl suddenly becomes the prime suspect, Alison takes it upon herself to crack the case before the imprisoned Carl deteriorates into a mindless zombie.

Brains is a fresh take on the post-apocalyptic genre, mixing humor and slice-of-life into horror. Told in five minute chunks, the series is a quick watch that doesn’t drag or linger too long on any one scene.

Overall, audio quality is pretty good, but sometimes the sound levels jump high-to-low between episodes or there is a lot of ambient noise in outdoor scenes.

Production value isn’t very high – I get that the series is going for a ‘found-footage’ vibe, but the lighting, sound, and impromptu set issues bring down the quality of the narrative, which gets pretty hard to ignore.

Just because it’s found footage doesn’t mean it has to look sloppy.

Dialogue is choppy and the plot is disconnected without a solid narrative structure connecting episodes and propelling the story. That alone could be forgiven, if the series were not also overacted. The periphery characters are especially poorly acted (at one point, a villain emphasized every other word unnaturally in a sentence to convey emotion and malice). The only bright spot is that Bri Castellini as Alison does a solid job with the material she’s given, and she’s largely what makes the series watchable.

It’s definitely not unwatchable like some of the other series I’ve seen, but don’t go into Brains expecting high production value or excellent storytelling. Come for the cute take on an apocalyptic world and leave whenever you’re tired of the lackluster cast performance or shaky camera. Good idea; mediocre execution.

One thought on “Webseries Discovery: Brains”