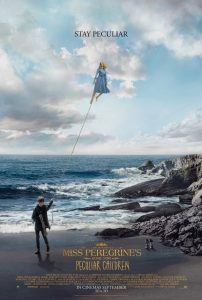 Tim Burton is back, this time presenting material that already fits his specific brand of quirk, but is that a good thing or bad? First, the usual caveats I put into these things when I know I have bias going into a movie. 1) I’m not particularly a fan of Tim Burton’s work, especially lately. I thought Dark Shadows may have been one of the worst movies I’ve ever seen. 2) I have not read the book on which this film is based, whether that served me well or hindered the experience we shall see.

The set up is thus: Tortured soul teenager Jake, played by Asa Butterfield, goes off to find the truth of the bedtimes stories his grandfather told him growing up. In doing so he stumbles across a portal through time and finds himself in the world of the Peculiars, people with specific powers.  Sounds like it’d be right up ol’ Burton’s alley eh?

Miss Peregrine’s as a whole is an enjoyable enough flick. The visuals are pleasing, the ideas charming, but I could not shake the feeling of it being overly manufactured. The character of Emma, played by Ella Purnell, wears large iron platform boots that look to have come straight up any reputable steampunk cosplayer’s closet.

The big scary monsters called ‘hollowgasts’ are straight up Slenderman, and while each character’s peculiarity seems to be specific type (often with funky names, Ymbryne?), rather than making them seem unique does quite the opposite with placing them neatly into categories, much like you’ll find in every YA dystopian novel.

The tagline itself (“Stay Peculiar”) lends credence to this commercialization of weirdness that Tim Burton has been cornering the market on for the past couple decades. I realize some of this may rest at the feet of Ransom Riggs, the author of the series, but as I have not read them I cannot comment.  In the movie alone it felt like I was watching it check boxes to win it’s targeted audience.

All that said, I will reiterate, I had a fun enough time. There are some genuinely creepy moments that play well against the oftentimes colorful world. A few touching  scenes give the film it’s heart that it would otherwise lack, and those aren’t even focused on the obligatory teenage romance! The characters and their powers are entertaining, so long as they aren’t getting bogged down in exposition.

In brief research I see a portion of the winning nature of the books is the collection of odd photographs found in them, being used for world building and I wonder how successful this movie can be at replicating it.

MILD SPOILERS in regards to Book to Film Transition:

I took along a friend who had read and loved the books to be my sherpa to the world as it were. After leaving the film I had to ask how it held up to her expectations. The answer was… less than stellar.

Apparently there is a lot of character swapping in the film and the final act seems to have gone off in an entirely different direction from the book. The characters of Emma and Olive specifically being the biggest ones, they have their peculiarities entirely swapped, where as Emma is a pyrokinetic teenager in the novel and Olive is aerokinetic, that is flipped in the film.

I’m not sure what it says to the fan base that the peculiarities are so unimportant to the characters’ cores that they can be freely maneuvered from one to the other without drastic changes. Maybe that’s a good thing, that what makes you ‘you’ isn’t your superpowers but what’s deeper down. I’m not sure, and I’m not sure the folks putting the movie out know either.

After all, they tie a lot up in being ‘peculiar,’ and in this case, that really does mean being ‘super.’