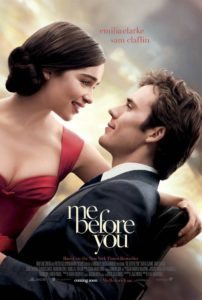 Based on Me Before You by Jojo Moyes

In the great tradition of romantic dramas like A Walk to Remember or The Notebook, Me Before You features a tragic couple falling in love during difficult times with a bittersweet ending that is meant to inspire hope. And while Me Before You follows this formulaic set-up, it lands uneven when approaching a sensitive subject like disability.

Will Traynor (Sam Claflin) plays a quadriplegic man who recently became disabled after a motorcycle accident. He was once a wealthy playboy who lived an active and perfect life. The film begins after he has been disabled, his mother has hired a local girl named Louisa Clark (Emilia Clarke) to be his carer. She is not expected to do much of the heavy lifting or responsibilities when it comes to taking care of Will’s physical health, instead she is simply to be his ‘companion’ of sorts.

As the film progresses, we learn that Will has had a difficult time adjusting to his new life, having lost his career, his friends, and his former girlfriend after the accident. After a suicide attempt, he has given his parents six months before he intends to end his life through Dignitas. His mother takes this as time to change his mind, by showing him life is worth living.

Louisa is a breath of fresh air in Will’s life, and does bring him out of depression in their time together. Although there are many pitfalls in Me Before You, it’s undeniable that Emilia Clarke and Sam Claflin have great chemistry together. Clarke is as expressive as ever, with wide smiles playing a quirky character who is as colorful as her wardrobe. Claflin is the image of brooding while managing a strong dosage of humor and charm that does not disappoint. These two stand-out and help to boost the film up through some rockier dialogue.

And it’s that great acting and chemistry that still makes this an emotional movie. It tugs at the heartstrings, and if you’re not thinking too hard about it, it will bring tears to your eyes. It’s the stereotypical movie you go to watch with your girlfriends and your mom and you prepare yourself to cry for the next two hours — in fact, they passed out tissues at the screening for this film. With Jojo Moyes writing the screenplay on top of authoring the book based on the film, it preserves much of the novel’s emotional notes.

There are undeniably problematic issues when it comes to a story like Me Before You. The very topic of disability leaves Hollywood often either struggling to balance what they want against a realistic and progressive story, or they simply ignore nuances that become very apparent in our activist age. Me Before You stands firmly in the second camp. When approaching social issues and the realistic view to disability, it sidesteps it completely and can become blindingly insensitive.

Will’s story lacks depth. Although he and Louisa foster a beautiful romance with one another, the relationship itself feels chaste and uneven. Louisa is rarely there to witness him at his physical worst, the film doesn’t give a chance to show two sides of a coin. Similarly, Will seemingly has no experience with the disabled community, he views himself as a burden and is never told otherwise.

The ultimate treatment of the heart of this story leaves us with a more bitter than sweet taste. Perhaps thirty years ago, a movie about euthanasia would have played out a little better (though, probably not by mugh), but in an age when diversity and equality champion the day, insensitive treatment of disability wins you no points even if you’ve got a pair of great actors.

Final Thoughts: It’ll draw in it’s intended audience easily. Even with the social issues and slight discomfort I felt while watching the film, I cried and laughed along with the rest of the movie theater. If you enjoy emotional romantic dramas, there’s nothing wrong enjoying this tearjerker, just go into this one with a good dosage of what is real and what is fiction and you should be fine.