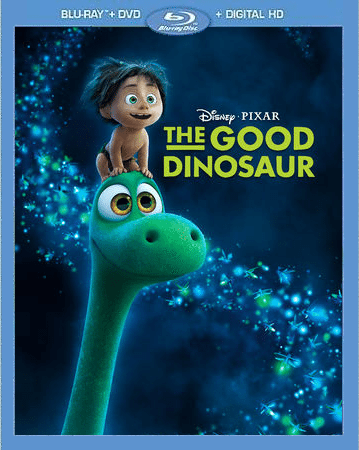 I’ve been waiting to see The Good Dinosaur for a while now. I missed it in theatres and always figured I would catch it when it released on blu-ray. The Good Dinosaur was released last Tuesday and this week I was finally able to sit down and watch it.

Somehow in all the time that’s passed I had managed to avoid learning much of anything about The Good Dinosaur. I knew the basic premise behind the movie and I knew from all the toys and marketing that the main caharacters were named Arlo and Spot. Beyond that, though, I managed to avoid pretty much any and all spoilers. I don’t even know if I ever saw a full trailer! I went into The Good Dinosaur completely blind.

And now that I’ve seen it I have to say that The Good Dinosaur was one of the strangest movies I’ve watched in a long time.

I don’t necessarily mean this in a bad way. I just mean that the whole thing was very unexpected. For those who don’t know, the basic plot behind The Good Dinosaur is that the meteor that killed off the dinosaurs missed Earth by a narrow margin and the dinosaurs continued to evolve for millions of years, taking on human abilities and characteristics but remaining wholly dinosaur. I expected more of a focus on that unique development.

Instead, what I found in The Good Dinosaur was a charming – sometimes strange and sometimes violent – coming-of-age Western about a boy and his dog on a perilous journey home. The only difference between this story and so many others with a similar premise is that the boy is in fact an Apatosaurus and the dog is a wild human. That might seem like a big difference at first but in truth it’s not. The Good Dinosaur has a classic kid’s adventure story premise from the get go and the fact that it’s about a young dinosaur and a human child doesn’t really seem to distract from things.

Our original reviewer was a bit critical of the film and understandably so. Where Pixar movies are often praised for trying new things and going against the grain, The Good Dinosaur plays it safe throughout the majority of the narrative. It’s about a boy becoming a man and about two friends struggling against nature. From the stereotypical journey home and the growth that comes with it to the budding relationship between Arlo and Spot, we’ve seen a lot of the movie before.

Still, that doesn’t make it any less enjoyable. One of the great things about The Good Dinosaur is that it is so similar to so many other, classic stories. Kids will enjoy the movie (though perhaps not the scary parts) and parents and grandparents will see a lot of familiar Western, adventure tropes that might just make them feel a bit nostalgic. One thing is for sure: despite how different it feels from the majority of the Pixar line up, this movie still had me in tears.

The Good Dinosaur was released last week and if you’re debating picking it up I would certainly recommend it. It’s a great family movie and it’s a nice adventure story if nothing else.

The blu-ray release also comes with a few notable special features that are worth checking out.

Pixar shorts are often no less awe inspiring than their longer counterparts and Sanjay’s Super Team is no exception. A semi-autobiographical film from the creative mind of director Sanjay Patel, the story explores a young boy’s struggle between the traditions of his father’s Hindu faith and his own interest in superheroes and pop culture. It’s a great

Behind the Scenes Features

There are several cool behind the scenes features included on the blu-ray release. A Filmmaker’s Journey describes the difficulties facing the team behind The Good Dinosaur. The team was thrown together very suddenly and there were some pretty drastic changes in development. This featurette goes through how the team manages to come together, find inspiration, and pull the whole film together.Every Part of the Dinosaur focuses on the animation challenges while Just Listen shows the musicians and sound technicians working to create the music and sounds that bring the film together. Lastly, Following the T-Rex Trail shows the team going out to a real working cattle ranch to herd cattle, get in touch with nature, and find inspiration for the T-Rex ranch family. (It’s actually probably the cutest special feature ever – everyone’s so excited!)

There are three deleted scenes included on The Good Dinosaur‘s home release. Some were cut to help with the flow. Others were cut because the story itself changes. One offers an alternative version of Arlo’s father’s loss. Another shows Arlo and his father building the family’s silo from the film. Yet another gave an early explanation for Arlo’s constant fear. Central to all of them is his Arlo’s relationship with his father, Henry, and it’s nice to see a bit more of the two of them together.

There are a couple other special features included. There’s the usual audio commentary as well as a wide selection of The Good Dinosaur promos from all across the world. There are also two other random featurettes. One, True Lies About Dinosaurs, is a short feature that generally sets kids straight on the fact that The Good Dinosaur really isn’t based much in scientific fact. Honestly, it’s a bit disappointing when they could have done a few fun, animated educational shorts instead! On the other hand, Recyclosaurus is amazing. It’s a short showing the departments at Pixar creating dinosaurs out of recycled items for an in-house competition. It’s so cool seeing what they come up with!

All in all, definitely a solid home release.

Like I said, they dropped the ball as far as the opportunity to include some real dinosaur facts in the special features. But for the most part they’re worth a watch. If nothing else, my top picks are (as always) the deleted scenes but also Recyclosaurus and Following the T-Rex Trail. They’re all cute, decent lengths, and features even the kids will want to sit through!

The Good Dinosaur came out on February 23rd so if you’ve looking to host a family movie night sometime soon this is definitely a great pick.

A REVIEW COPY OF THE GOOD DINOSAUR ON BLU-RAY COMBO PACK WAS PROVIDED BY THE DISNEY AND FINGERPAINT MARKETING IN EXCHANGE FOR A FAIR AND HONEST REVIEW. NERDOPHILES WAS IN NO WAY COMPENSATED FOR THIS REVIEW. OUR OPINIONS ARE OURS AND OURS ALONE.