The Bands of Mourning 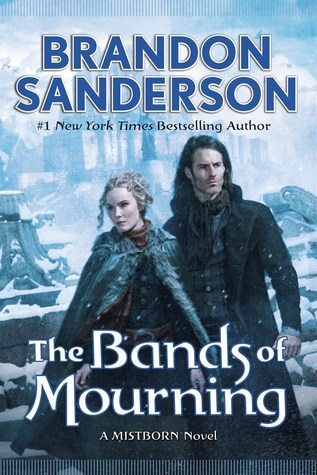 If someone were to ask me to come up with a list of my favorite authors, Brandon Sanderson would rank somewhere towards the top of that list, if not in the top ten. I say that even discounting the Mistborn series for which he’s garnered so much praise among fantasy readers. That’s because somehow I have managed to unintentionally avoid the series over the years despite countless recommendations and promises to myself that I would make time to read them.

That all changed recently, however, when I learned that The Bands of Mourning was coming out. I finally made the decision that this time I would absolutely make time for the series. While some people might suggest going back all the way to beginning I decided to go back only so far as The Alloy of Law, the book in which our current heroes were introduced.

Don’t get me wrong, I’ll go back and read the original Mistborn trilogy at some point.

But I’m a sucker for fantasy and westerns and this series managed to give me both in a delightfully entertaining package. I read through The Alloy of Law and Shadow of Self in mere days before moving on to The Bands of Mourning.

The Bands of Mourning starts off shortly after the last book and actually picks up with Wax and Steris’ wedding. Well, what is meant to be their wedding. As it turns out, things don’t go according to plan and that’s hardly a shock to anyone involved. Nothing ever seems to go according to plan when Wax is involved. (Or for that matter – Wayne.)

Before they can start working on getting their nuptials back on track, though, Wax ends up getting wrapped up in a kandra plan to track down the Bands of Mourning – a pair of legendary metalminds that you really wouldn’t want to see land in the wrong hands.

Where Wax goes everyone else goes and this sets the stage for their adventure this go around. Wax – along with Wayne, Marasi, the kandra MeLaan, and even Steris – head off in search of the Bands of Mourning. They take off to New Seran, which is a brand new part of the world for us to explore. It’s really a fantastic premise because this diverse cast of characters shines when played against one another.

The Bands of Mourning treats us to new locations and new threats and brings back some familiar antagonists. While the plot is at times predictable it never gets boring. None of Sanderson’s books ever do, but the Mistborn books in particular excel at blending slower paced adventure with action-packed moments and nerve-wracking showdowns that keep you flipping the pages, unable to put the book down.

And this installment in the series is no exception.

Honestly, though, as much fun as the plot always ends up being, the real driving force behind the series – at least as far as I’m concerned – is always the characters. I love the characters Sanderson has created and they are the primary reason I keep coming back for more.

Interestingly enough, it’s not even Wax who intrigues me most. It’s literally everyone else. The secondary characters are the best. I love Wayne for his crass humor. I love Marasi for being such a strong, determined woman. I love MeLann for being so weird. And I love Steris for how far along she’s come.

If there’s one character that’s gone through an incredible transformation throughout these books it’s Steris. Where she originally was sort of a standoffish character she’s truly become one of the gang and an outstanding character in her own right. After her initial introduction I never saw her becoming what she is to me now nor did I ever see her relationship with Wax developing in the way it has.

I’m so pleasantly surprised by the fact that not only has she become one of my absolute favorite characters in the series but that the romance between her and Wax has developed so naturally. After reading so much young adult fiction with it’s uninspired, instant relationships they have truly been a breath of fresh air.

But seriously, she steals the show this time around with her wit and dry humor.

I love her so much.

I’m incredibly sad that this is essentially the second to last go around with all of these characters. At this point I could probably just read book after book of what I hope would be Wax and Steris’ post-adventure marital bliss with the occasional cameo of bad-ass Marasi and Wax’s kids’ kooky “Uncle Wayne.” Sadly, The Last Metal will be the end of our adventures in the second era of the Mistborn series. And while I basically need that book right now so I can read it and love it, I’m sure I’ll be super sad to say goodbye.

Fortunately for anyone who is new to the series, The Bands of Mourning hit stores just about two weeks ago. This is the perfect time to catch up on the Wax and Wayne series before the big finale. Take my word for it – you absolutely should and you really won’t regret it.

A review copy of  The Bands of Mourning was provided by the publisher in exchange for a fair and honest review. Nerdophiles was in no way compensated for this review. Our opinions are ours and ours alone.