Experience “Inside Out” All Over Again on Blu-Ray and Explore Hours of Amazing Special Features! 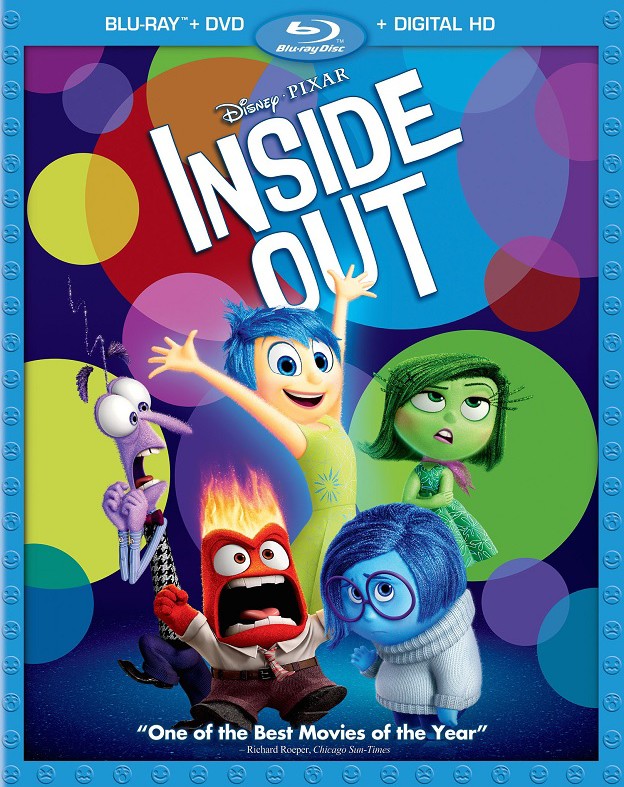 I love Inside Out.It’s such an amazing film. Steve gave it a four-and-a-half star review back in June and I added half a star to this review. I really don’t think I’m exaggerating when I say that Inside Out was easily the best family film to hit theaters this year. If nothing else, it’s certainly my favorite animated film to come out in quite a while.

In true Pixar fashion, Inside Out had me both laughing and crying – and then gave name, shape, and personality to all the emotions I was feeling inside. How fitting that a studio that’s reduced us to tears so many times would take us inside our own emotions.

The film follows Joy, Anger, Fear, Disgust, and Sadness – the five key figures that make up the emotions of a young girl named Riley. After a pretty happy life full of Joy-filled memories, Riley’s family moves across the country from Minnesota to San Francisco. Riley’s emotions try to help guide her through these drastic changes in her life but after an accident in Headquarters both Joy and Sadness find themselves lost in the depths of Riley’s brain. While these two contrasting emotions try to work through their differences and get back to Riley, the other emotions try to hold down the fort with disastrous results.

While it might seem like a simple premise, Inside Out is anything but a mere children’s film. The movie tackles some pretty deep issues. This is a real testament to Pixar’s storytelling abilities. Rather serious messages can be hidden in such an amazing family film without losing everything that makes the story fun.

Honestly, I don’t think Pixar could ever disappoint me.

Fans of the film won’t be disappointed by this blu-ray release, either. There are an incredible amount of bonus features on this release and so many of them are absolutely worth watching. From a short animated sequel to the main movie to an inspiring discussion with the women behind the film, I honestly couldn’t get enough of these bonus features.

This is the rare release that’s getting a five star rating from me for both the movie itself and all the extras.

Story of the Story
Inside Out is a movie with an origin story almost as incredible as the story we’ve seen. The whole thing came together after Pete Docter, the director, came up with the idea of trying to explore childhood and growing up through the mind of a child after watching his own daughter grow up. But it wasn’t a simple idea to bring to the screen. They went through an incredible number of changes and scenarios trying to piece together the story. While some things – like focusing on Joy as the primary character – remain the same so many other things changed drastically. In different versions, Joy was paired up with with a male Sadness, a version of fear named Freddie, Bing Bong, and just herself. With a little input from the voice actors here and there whole sections of the film were changed entirely. It’s amazing to see how much they had figured out and how much they changed to find the best way to tell the story behind Inside Out. We could have been watching an entirely different movie had things not come together. And I think that’s really awesome to see.

Path to Pixar: The Women of Inside Out
Deleted scenes are usually my favorite feature on a blu-ray release but this time around I think it might be this one! Oh, man. I’m telling you guys I kind of teared up a few times during this one. The women behind the scenes and behind the characters came together to talk about their own childhoods and working hard to achieve their goals. They talk about how they took chances and learned to be comfortable with the challenges that came along with the jobs and getting where they wanted to be. It was so great and empowering. I really can’t recommend this enough – both for little girls and for adults, too, who are looking for a little inspiration to follow their dreams.

Mixed Emotions
Trying to figure out the right emotions to focus on in Inside Out wasn’t easy. Designing them and making them into the iconic characters we saw in the final film was even harder. The filmmakers take a moment to explain the process to us – from imagining Fear as an immobile stick with eyes to using sad music and  ‘method character designing’ to help design Sadness.

Designing Abstract Thought
A Disney Movies Anywhere exclusive feature, this three minute video is one of the shortest special features included. Don’t let that discourage you though! It’s a quick look at the process of designing one of the coolest – and weirdest – scenes in Inside Out!

Mapping the Mind
This feature is incredible. It’s all about how they designed Riley’s mind as a physical place that could be explored. The amount of effort they went through to make things work is really awesome. They spent a lot of time not only trying to imagine what it would be like to be inside the mind of a preteen girl but trying to understand neuroscience in general. They did their best to make things authentic while still giving us a fantastical world. From consulting psychologists and neurologists to visiting an egg sorting plant to find inspiration for memory sorting, they went above and beyond. In this feature they point out a lot of the little things that they did to make the movie realistic that you may not have noticed before.

Deleted Scenes
With a movie that has gone through as many changes as Inside Out, there are bound to be a lot of deleted scenes. Even though it’s animated the filmmakers put a lot of effort into animating storyboards to test out their ideas. There are four deleted scenes on the disc and two more on Disney Movies Anywhere should you redeem the digital code and they are really, really interesting to watch. The main reason for this is because they can be so different from the movie we actually saw. The deleted scenes featuring Freddie (the original Fear) in particular are way different than what we saw in the final movie and they really make you wonder what Inside Out could have been like!

Our Dads, the Filmmakers
Elie Docter, the daughter of director Peter Docter and the original inspiration for Inside Out, joins forces with Grace Giacchino – the daughter of the composer – to create a hands-on documentary about their fathers’ work on Inside Out. It’s a super cute little documentary that shows the girls trying to understand what exactly it is their fathers do. It looks like they had a lot of fun and I love that these girls got to make a documentary about their fathers and spend some time working on something they could all enjoy together. Disney could have copped out and made this a dumb, cookie cutter feature with random Disney Channel stars. Instead they embraced the filmmakers’ families and that’s pretty awesome.

Into the Unknown: The Sound of Inside Out
Can you imagine trying to come up with unique sounds for things that have never been heard before? That’s essentially what the team working out the sounds and music behind Inside Out were trying to do. The mind is an unknown realm and yet everything needed to have some sort of natural, audible response. It’s amazing the way they capture sounds and come up with ideas for things. Utilizing all kinds of tools from violin bows to glass baubles to more they some how manage to bring the world to life. And I bet you didn’t even give the sound effects much thought!

The Misunderstood Art of Animation Film Editing
Film editors finally get their due! In this short feature focusing on Kevin Nolting’s work and the challenges of editing a film like Inside Out. As he says, this started out as a movie that was simply an idea. There was no story. Now imagine trying to make that a coherent film. This feature helps you appreciate one of the unsung heroes of the Disney production process!

Riley’s First Date
The number one reason that anyone who has already seen this movie should buy this movie is Riley’s First Date. It’s a short film continuation of the original movie. Jordan – the boy Riley ran into at the hockey game at the end of Inside Out – comes to her house to pick her up so they can go hang out with friends. Convinced that this is a date, her parents – and their emotions – try to process things and the fact that Riley is getting to be old enough to date boys. Dad, in particular, spends a lot of time giving Jordan the third degree which is pretty hilarious. I was really excited about this and I was not at all disappointed.

Mind Candy
An interesting hodgepodge of animation, Mind Candy appears to be a series of random scenarios and animation tests featuring Riley and the various emotions. It begins with Riley doing her homework at the dining room table with the emotions all lounging around bored. It then cycles through conga lines, random interactions between characters, and more. We see each emotion get behind the wheel in Headquarters and respond to different things that happen to pop up while Riley is studying. It’s cute and fun to watch. And if you’re someone who likes to make .gif sets for Tumblr you’ll have a ton of material to work with here!

Lava
Short films come before pretty much every Disney or Pixar film you watch these days and, honestly, I couldn’t be happier. After the emotional rollercoaster that was Feast I figured it’d be hard for any other short films to really work their way into my heart the same way. Lava proved me wrong, though. Who knew that a love story between two volcanoes could be so touching?

Also included are a few of the film’s original trailers – including one from Japan. This is awesome. I love trailers and I love that we have physical (or digital for those of you getting just the digital version of the film) copies of them. I always worry they’ll just get forgotten and disregarded on YouTube. But these ones will stick around with us!

Inside Out will stick with us, too.

Sure, it’s not Frozen. Inside Out doesn’t have the same marketing presence as Else and Anna. But while we might not be belting out something in competition with “Let It Go!” the movie itself has a certain staying power in it’s subject matter. We were all kids once and we all know what it’s like to have to grow up. And we’ll always have kids in our lives to share those moments – and this movie – with moving foward.

If you haven’t already seen Inside Out you need to and this the perfect time to pick it up. Even if you have seen it, the special features make this release more than worth experiencing this film all over again. This is going to be the animated movie to put under the Christmas tree this holiday season for both kids and adults alike!

A review copy of the Inside Out blu-ray combo pack was provided by the Disney and Fingerpaint Marketing in exchange for a fair and honest review. Nerdophiles was in no way compensated for this review. Our opinions are ours and ours alone. Please note that our review is for the three disc blu-ray release of Inside Out. The Ultimate Collector’s Edition comes with a 3D blu-ray disc as well.